The move occurred as the broader market was declining, but the movie theater operator also got some potentially bad news recently.

Sharp moves in AMC Entertainment's (AMC -2.14%) share price are nothing new this year. The meme stock has endured big jumps and steeps drops with seemingly no reason beyond the flow of chatter on social media's investing forums. On Tuesday, the U.S. stock market was trending downward, and shares of the theater operator were too. But there has also been some worrisome news recently about a situation that could impact AMC's future. As of 12:10 p.m. EDT, AMC shares were down about 4.3%.

Over the last week, AMC shares are down by almost 6.5%. That drop may have been related to something Walt Disney CEO Bob Chapek said while speaking at the Goldman Sachs Communacopia Conference last Tuesday. 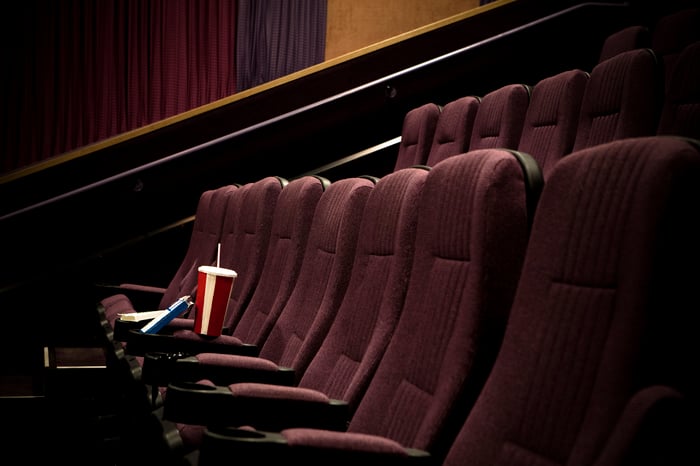 Even on the heels of the successful theater-only release of Disney's latest Marvel blockbuster, Shang-Chi and the Legend of the Ten Rings, Chapek wouldn't commit to continuing that business model past this year. In fact, he stated that Disney would be flexible with film releases, and implied there will be a mix of debuting movies on its Disney+ streaming service along with various windows for theater showings.

That is not something AMC shareholders want to hear. AMC has seen its market cap lifted to $20 billion on the backs of retail traders hoping to profit by punishing short-sellers. But for the company to begin to justify that valuation, the business itself will have to turn around. Moreover, the company needs to pay down the massive debt it took on so it could stay afloat until customers come back to theaters -- assuming they do return in something like their former numbers.

With Disney failing to commit to releasing movies exclusively in theaters beyond this year, the future of AMC's business remains uncertain. For investors who are paying attention to the outlook for the business, that's another incentive to take profits and move on.