The House of Mouse did not commit to releasing films exclusively in theaters beyond this year.

Unsurprisingly, the topic of exclusive theatrical film releases came up -- to which the CEO gave insight into the company's thinking. The House of Mouse is not committing to exclusive theatrical releases in the future. The announcement follows a previous one where Disney said it would exclusively release the rest of its 2021 film slate in theaters. Let's dive deeper and discern why it could be bad news for movie theater chain AMC Entertainment Group (AMC -2.14%). 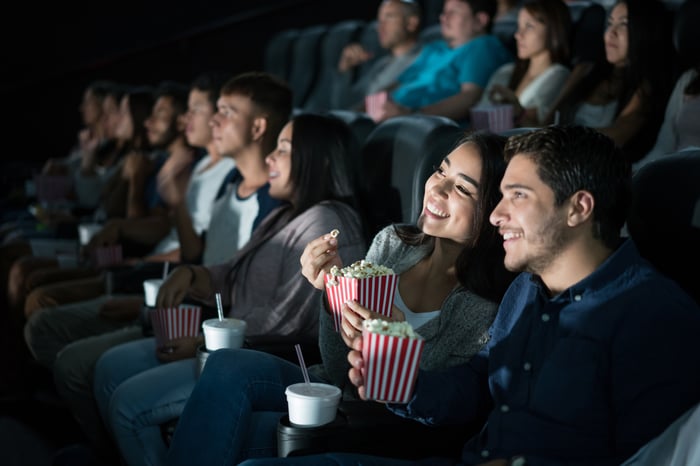 Disney is keeping its options open

Since the pandemic onset, Disney has implemented three methods of releasing new films: Direct to its streaming service free to subscribers, simultaneous release in theaters with the option to buy the movie on streaming service for $29.99, and finally, the traditional exclusive theatrical release. Note, studios typically split box-office revenue 50/50 with theater chains.

Out of the three, there is no question AMC would prefer exclusive theatrical releases. That way, if consumers want to see the movie, they have no choice but to go to a theater to watch it. That is, of course, for the first 30 days or 45 days or however long the exclusivity agreement is in place before it moves onto streaming services. With no option other than to wait, consumers could be enticed to watch in theaters.

At the opposite end of the spectrum are the free to existing subscribers direct to streaming releases. These are the worst for AMC because the films never hit theaters, earning zero revenue.

Although not the best, the simultaneous release format gives AMC a chance to bring people to theaters and earn revenue on ticket sales and concessions. Marvel's Black Widow was released in theaters and on Disney+ for purchase at $29.99 on the same day. As of this writing, the film has grossed $378 million in box office sales -- not to mention the revenue earned from selling $9 popcorn and $6 soda.

The film also earned $125 million in sales on Disney+. At $29.99 per purchase, that constitutes at least four million households. You can start to see how a simultaneous release could cannibalize box office sales.

Therefore, AMC must not have been happy with the Disney CEO's failure to commit to exclusive theatrical releases in the future. Disney already committed to exclusive releases for the rest of 2021, so there was hope it would extend the decision long-term, which was not the case.

Home theaters are getting better

Box office ticket sales have been on a steady decline for two decades. The in-home viewing experience has improved over the years, while the theater experience has stayed roughly the same, albeit more expensive.

The coronavirus pandemic allowed studios like Disney to experiment and learn from multiple film release options. Before the outbreak, the only option had been exclusive theatrical. Studios would not be prudent if they didn't hold onto that option, even if they don't end up exercising it. At the very least, it could improve studios' negotiation power over revenue split and other terms against AMC.

As AMC battles to bounce back from lost revenue during the pandemic, news like this from Disney will not help.