AMC Entertainment Group (NYSE:AMC) was devastated at the pandemic's onset when it had to shut its doors to moviegoers. Since nearly all the company's revenue comes from bringing people to its theaters to view films and buy buckets of popcorn and tumblers of soda, the stoppage was catastrophic.

Film studios, including Walt Disney (NYSE:DIS), had to make tough decisions regarding movies they planned on releasing in theaters during the pandemic. The outcome of those deliberations was a varied release schedule, with some films earning exclusive theatrical releases and others receiving a blended launch on streaming services and in theaters. Fortunately for AMC, Disney, for now, has ended its mixed release experiment with an announcement stating the rest of its 2021 films will receive initial release exclusively in theaters. 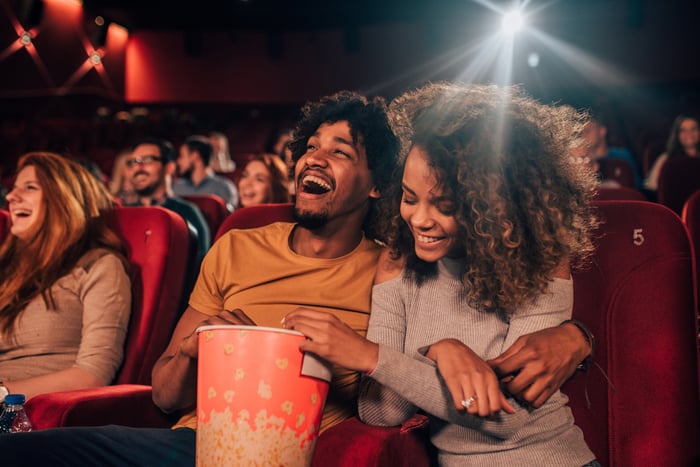 Coming to a theater near you

The news is music to AMC's ears. The company is struggling to bounce back from the pandemic, and simultaneous releases on streaming services were not helping the cause. However, you could not tell if you were only looking at the company's stock, which is up over 2,000% this year. The announcement comes on the heels of the success of Disney's latest theatrical release of Marvel's Shang-Chi and the Legend of the Ten Rings. The film has cumulative box office receipts of $166 million worldwide by the end of its first week in theaters.

Overall, Disney has six films slated to come to theaters through the remainder of 2021:

"Following the tremendous box office success of our summer films which included five of the top eight domestic releases of the year, we are excited to update our theatrical plans for the remainder of 2021," said Kareem Daniel, Chairman, Disney Media & Entertainment Distribution.

Of course, Disney is only one player, and others have not made similar commitments. However, Disney is a box-office juggernaut with five out of the top eight domestic releases this year. And the decision removes the risk of streaming releases taking center stage for major blockbuster films. It could have played out much worse for AMC if streaming releases gained incredible traction and gave studios more reason to send hit films straight to their own platforms.

What this could mean for AMC investors

While the move is incredibly positive for AMC, there is a lot of work left to be done by the battered exhibitor. Revenue is still nowhere near pre-pandemic levels, and there is no telling if it ever will be. This does further reduce the worst-case scenario for AMC, and it continues to gain momentum. Still, in its second and most recent quarter, AMC lost $234 million in cash from operations.

For now, the company takes another step forward. It remains to be seen how many steps will be needed to return to profitability on the bottom line. Good news is good news, and there is a reason for AMC management and shareholders to cheer.