Please ensure Javascript is enabled for purposes of website accessibility
Log In Help Join The Motley Fool
Free Article Join Over 1 Million Premium Members And Get More In-Depth Stock Guidance and Research
By Parkev Tatevosian, CFA – Updated Sep 8, 2021 at 9:03AM

GameStop's stock-price performance has helped it pay off all of its long-term debt. That should help increase profits.

AMC Entertainment (AMC 1.36%) and GameStop (GME 1.23%) have at least one thing in common: The stock of both companies has been caught up in a buying frenzy this year that's led to their share prices rising at least 950% in 2021.

The remarkable increase in the stock price has created a situation where their valuations are divorced from their operating performance. Even before the pandemic, the companies were struggling to grow revenue, and pandemic-related economic lockdowns hurt their businesses even more.

With the price jump, the management of both companies saw an opportunity to raise equity by selling additional shares of stock. GameStop used the funds raised to help eliminate long-term debt. If AMC can do the same, it would help its profits soar. 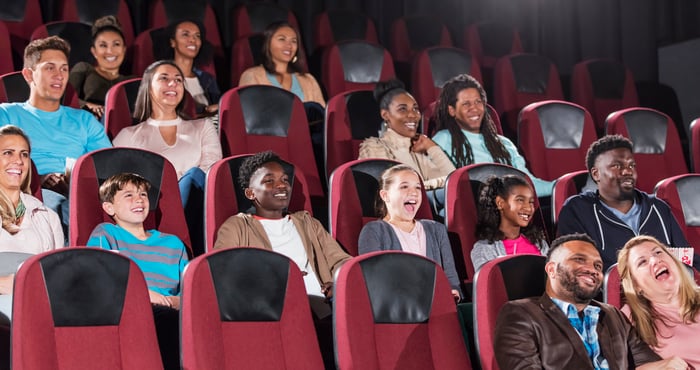 It is not always the case where issuing more stock can help raise profits for a firm. However, AMC stock is up 2,100% and GameStop stock is up over 956% in 2021 and both had expensive debt on the balance sheet. That combination suggests it would be prudent to issue shares to pay back debt. The cost savings from lower interest payments should offset the dilutive impact of having more shares outstanding.

In April, GameStop sold additional shares of its stock to the public and raised $550 million in proceeds. That was enough to pay off what was remaining of the company's long-term debt. Here's how CEO George Sherman broke things down in the Q1 2021 earnings conference call:

Interestingly, GameStop reported a net loss of $66.7 million in its most recent quarter and an interest expense of $24.9 million. With all of its long-term debt eliminated, that interest expense should get closer to zero.

AMC has a bigger hole to dig out of

Similar to GameStop, AMC used its inflated stock price to raise equity. In the most recent quarter, it sold enough additional shares to raise $1.2 billion. However, the figure is not nearly enough to pay off the over $5 billion of short- and long-term debt on its balance sheet. The company has reached its authorized limit on how many shares it can sell to raise equity. Management is attempting to get shareholders to raise that limit so it can raise much-needed cash. Shareholders balked at the idea.

To make matters worse, AMC's debt is a bigger burden than GameStop's was. In the first six months of fiscal 2021, AMC has incurred an interest expense of $239 million on revenue of $593 million. AMC's most recent debt issuance of $100 million in January of this year was at an interest rate of at least 15%. Overall, $1.9 billion of the company's debt is at a reasonable 3% rate, while the rest of its debt collection costs over 10%.

Besides the interest expense, AMC must consider the repayment of principal. It must pay back or refinance $580 million in 2023, $618 million in 2025, and a whopping $3.8 billion in 2026. Thankfully, management has raised the cash balance to $1.8 billion, but AMC is still generating negative cash in operations.

If AMC shareholders can agree to let management issue more stock to eliminate the company's long-term debt, it could again generate profits instead of paying out hundreds of millions of dollars in interest payments alone to lenders. Not doing so could waste a golden opportunity for the company to pay off its high-interest debt. AMC has not earned over $310 million in operating profits in any year in the last decade. Still, its interest expense is on pace to eclipse that total this year and stay higher until the company pays it down or refinances the debt.

For those reasons, it could be a major boost to the company's earning potential for shareholders to allow an additional equity sale.