Don't worry about what the stock market does this month. Focus on the long term with these three stocks.

If you're an investor, you might be getting a little nervous. The stock market is off to a rocky start in a month that's infamous for major crashes. It could be tempting to stay on the sidelines.

However, if your focus is on the long term, it really doesn't matter all that much what the market does over the next few weeks. What's important is what the stocks you own are capable of doing over the next few years and even decades. With that perspective in mind, here are three no-brainer stocks to buy in October. 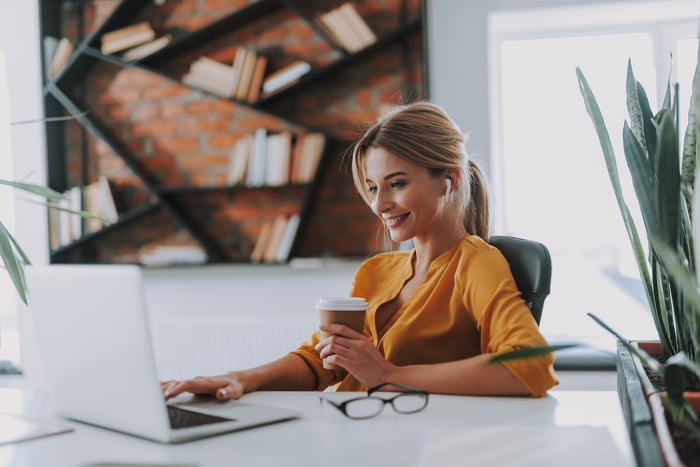 Here are two numbers to keep in mind: 131 and 3,067. The first number is how many countries have committed to net-zero carbon emissions as of July 2021. The second number reflects companies with net-zero commitments. To achieve these goals, an estimated $3.5 trillion to $5 trillion will need to be invested annually in renewable energy over the next three decades.

Renewable energy presents an enormous market opportunity, and Brookfield Renewable (BEP -0.11%) (BEPC -0.10%) is one of the leaders poised to capitalize. The company currently operates hydroelectric, solar, and wind facilities that generate around 21 gigawatts of power.

Brookfield Renewable's development pipeline will add more than 31 gigawatts to that total. While hydroelectric is the company's main focus today, its future is largely in solar and wind power.

The renewable-energy provider has taken on a considerable amount of debt to fund its aggressive capacity expansion. However, Brookfield Renewable appears to be making a smart bet, with the demand for clean energy set to skyrocket over the coming years.

You're not going to find too many companies that offer the combination of a strong moat and great growth prospects like Intuitive Surgical (ISRG 0.62%) does. Buying this healthcare stock is an easy decision, in my view.

Intuitive Surgical pioneered the robotic surgical-systems market more than two decades ago. The company now has more than 6,400 systems installed, including its flagship da Vinci system and its newer Ion system. No other rival comes close to matching Intuitive's installed base or track record.

Even better, Intuitive Surgical has only started to tap the potential market opportunity. The company estimates that around 6 million surgical procedures are performed annually for which its robotic systems could be used without any additional regulatory clearances. By comparison, only a little over 1.2 million procedures were performed with Intuitive's systems last year.

Intuitive plans to win more regulatory clearances, though, with products that it's developing. Roughly 20 million soft tissue surgeries are performed each year that are candidates for the company's technology that's on the way. The future looks very bright for this robotic surgical-systems giant.

There's one thing that MercadoLibre (MELI 0.08%) and Intuitive Surgical have in common: Both stocks look absurdly overvalued but really aren't. MercadoLibre's shares trade at a whopping 232 times expected earnings.

Why is this stock a no-brainer pick for October with that lofty valuation? For one thing, MercadoLibre is more focused on expansion right now than profits. As a result, using earnings-based valuation metrics with the stock simply doesn't mean all that much.

More importantly, there's a reason why the company is so focused on expansion. Morgan Stanley projects that the Latin American e-commerce market will soar from $68 billion last year to $160 billion in 2025. MercadoLibre is in the best position to benefit from this expanding market.

The longer-term picture for MercadoLibre is even more encouraging. Fidelity Investments thinks that the Latin American e-commerce penetration rate could increase by more than six times over the next few decades. MercadoLibre also should have a huge growth opportunity with its online-payments business. Regardless of what the stock market does this month, investing in this stock and holding for the long run makes sense.

Nasdaq's Correction Could Be Nearly Over: 3 Stocks to Buy Sooner Rather Than Later

Have $3,000? Buying These 3 Stocks Now Just Might Be the Smartest Move You'll Ever Make