Trupanion (TRUP -2.73%) endured a rocky September as the pet insurer's stock price plummeted by 15.2%, according to S&P Global Market Intelligence.

It was a difficult month across the board on Wall Street -- the S&P 500 had its worst showing since March 2020, losing 4.8%, and the Nasdaq was down 5.3% -- but Trupanion underperformed even those tepid benchmarks. The stock is currently trading at about $79 and was down about 34% year to date as of Tuesday. 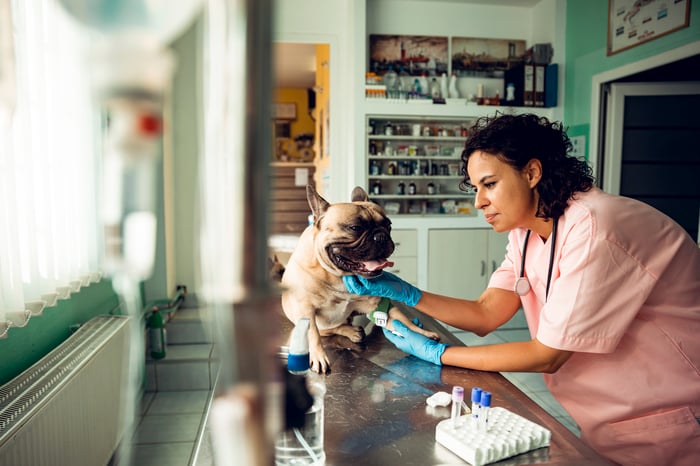 September is traditionally a bad month for the stock market, but concerns about inflation and the spread of the Delta variant didn't help at all.

For Trupanion specifically, the declines may have been connected to its second-quarter earnings miss. The company reported a net loss of $0.23 compared, while analysts had expected a net loss of $0.12. Also, CEO Darryl Rawlings sold 4,000 shares in the company on Sept. 7. In the two weeks that followed, the stock fell from about $91 per share to $80. But it's worth noting that Rawlings still owns close to 1 million shares of Trupanion.

And a closer look reveals a company that is firing on all cylinders. Revenue grew 43% year over year to $168 million in the second quarter, beating estimates, and the number of pets enrolled in its insurance policies rose by 37% year over year to just over 1 million. The earnings miss can be traced to an increase in stock-based compensation, which added $0.11 per share to the net loss, and increased depreciation and amortization, which trimmed another $0.04 per share, Co-President and CFO Tricia Plouf explained on the earnings call.

Investors shouldn't read too much into Trupanion's September swoon. Executives buy and sell shares for a variety of reasons, and Rawlings' sale wasn't a lot. Sometimes those sales can spook investors in the short term, but the long-term view for Trupanion remains bright.

The company has had 55 straight quarters of revenue growth of 20% or more, which is pretty amazing. And it's just scratching the surface of a wide-open addressable market -- only about 1% of pets in the U.S. are covered by insurance.

It currently serves U.S. and Canada, but it is expanding internationally -- in June, it hired Simon Wheeler to lead its international business. The global pet insurance business is estimated to grow at a 7.7% annualized rate through 2027, and as one of the largest pet insurance companies, Trupanion should benefit.

Why Trupanion Stock Was Down 10% on Thursday