This investment company is buying back its shares at a big discount while also holding stocks that do the same... and it's not Berkshire Hathaway.

Some criticized Warren Buffett for not making many stock purchases during the COVID-19-affected downturn of 2020, but one stock Buffett did buy hand-over-fist last year was Berkshire Hathaway (BRK.A 0.07%) (BRK.B 0.10%) itself. Buffett appeared to like his existing portfolio very much, and Berkshire's value declined last year, so why not invest in that portfolio at a discount?

What made Buffett's buybacks especially appealing is that the portfolio companies within Berkshire were themselves buying back stock too. In fact, Buffett devoted lots of real estate in his 2020 annual letter to highlighting this phenomenon, specifically regarding Apple:

When we finished our purchases in mid-2018, Berkshire's general account owned 5.2% of Apple. Our cost for that stake was $36 billion. Since then, we have both enjoyed regular dividends, averaging about $775 million annually, and have also -- in 2020 -- pocketed an additional $11 billion by selling a small portion of our position. Despite that sale -- voilà! – Berkshire now owns 5.4% of Apple. That increase was costless to us, coming about because Apple has continuously repurchased its shares, thereby substantially shrinking the number it now has outstanding... But that's far from all of the good news. Because we also repurchased Berkshire shares during the 2 1/2 years, you now indirectly own a full 10% more of Apple's assets and future earnings than you did in July 2018.

While Berkshire's moves were smart, double layers of buybacks just began happening in another large investment company in August -- and the payoff could be much, much bigger than Berkshire's. 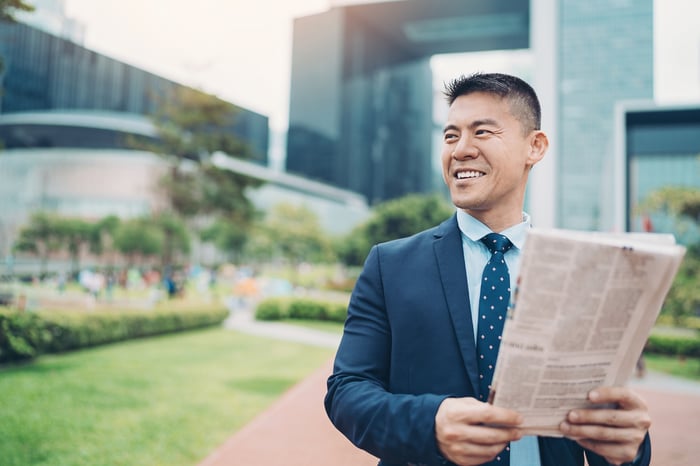 The phenomenon of double buybacks should massively increase value for shareholders in Prosus (PROSY 1.32%) and its largest shareholder, the South African media company-turned-venture investor Naspers (NPSNY 1.29%).

A quick history: Naspers made perhaps the best venture investment in history with a $32 million purchase of Tencent (TCEHY 3.69%) stock back in 2001. Even after trimming its stake in both 2018 and earlier this year, that stake was worth $164 billion at the end of September -- and keep in mind, Tencent's stock had been cut 40% from all-time highs at that time.

As Tencent and Naspers grew, Naspers soon began trading at a big discount to its Tencent stake due to its massive size in proportion to the Johannesburg Stock Exchange. So in 2019, Naspers spun out its non-South African investments, including Tencent and other international tech stocks, into a holding company called Prosus, which trades on the larger Euronext exchange in Amsterdam.

Unfortunately, that hasn't really solved the discount problem, as Prosus trades at a big discount to Tencent, and Naspers trades at a discount to the value of its stake in Prosus. Despite moves to attempt to close the discount, including an August share swap designed to lower the weighting of Naspers on the JSE and increase Prosus' float, the discount has actually widened, even though Tencent itself is down this summer amid China's regulatory crackdown.

But the double discount is a big buyback opportunity

While Tencent's stock has been reeling, it's also quite possible the stock may be nearing a bottom. After the company's second-quarter earnings report in mid-August, Tencent has disclosed it's been repurchasing stock every day since.

Tencent has traditionally invested its free cash flow into investments in other businesses, and that investment portfolio has grown to more than $220 billion as of June 30. In addition, Tencent recently announced a $15.5 billion social equity fund that it will contribute to over a number of years, in an effort to please Chinese government officials.

Yet despite those alternative uses of cash, Tencent appears to think its own stock is now as good or a better investment at the moment. After a small number of buybacks in August, Tencent bought back 3.4 million shares in September. While that's a paltry 0.03% of shares outstanding, given the other potential uses for cash, it does say something symbolically. And whether a coincidence or not, Tencent's share price seems to have bottomed out around the exact time it began repurchasing stock: 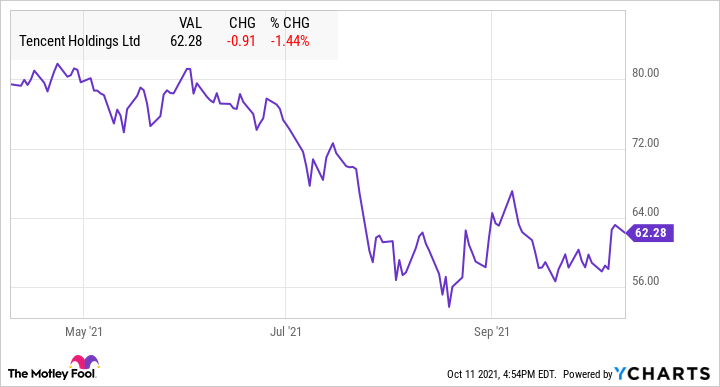 Prosus is buying back in a bigger way

Fortunately for Prosus, it sold about 2% of its remaining Tencent stake for about $14.6 billion in April of this year -- just before Tencent's stock took a big plunge. Prosus' average sale price was for $595 Hong Kong dollars per share, compared with an August low of HK$412 per share and today's price of HK$496 per share.

In August, Prosus, like Tencent, also began a new share repurchase program, which will total $5 billion. Since then, Prosus has been purchasing about $250 million of its own stock per week, and it already repurchased about $1.5 billion just since late August. Those repurchases should be incredibly accretive, since Prosus trades at a big discount to its net asset value (NAV), about 80% of which consists of that remaining Tencent stake.

And Naspers trades at an even deeper discount, but no buybacks... yet

Believe it or not, even though Prosus trades at such a big discount, Naspers' stock trades even at a discount to the readily identifiable market price of its stake in Prosus. While Prosus trades at $0.58 on the dollar to the value of its assets, Naspers' share price, based on its ownership of Prosus' assets, trades at an even steeper $0.43 on the dollar, according to company estimates.

This ride has been frustrating for both Prosus and Naspers shareholders. And although Prosus was also allowed to buy back shares of Naspers earlier this year, it is not allowed to do so following the August share swap, unless South African regulators relax certain rules.

Still, Prosus' ownership of Tencent is now increasing with Tencent's buybacks, and Prosus' shareholders, including Naspers public shareholders that currently own just over 40% of Prosus' assets, will see that ownership stake increase as well as a result of Prosus' buyback program.

While the lagging share prices of Prosus and Naspers relative to NAV has been frustrating, long-term Foolish shareholders should rejoice at the opportunity for so many buybacks at such discounted prices. After all, if this scenario is good enough for Warren Buffett, it should be good enough for Naspers/Prosus shareholders as well... assuming Tencent bounces back, and given enough time.