This innovative crypto has more than meets the eye.

Arweave (AR 0.86%) is the world's first blockweave coin -- which is a data storage protocol that enables permanent storage of digital assets such as transactions, smart contracts, Web pages, videos, images, and more, directly on its native blockchain. To put that in context, the Bitcoin (CRYPTO: BTC) blockchain can contain only a few hundred bytes of data at a time when it comes to handling transactions (which are digital lines of code that take up storage space on its ledger and network).

It should be no surprise that investors are excited about the innovation as well. Over the past year, AR coins have gained 1,510.77% in value. It's now the 58th largest cryptocurrency globally, with a market cap of $2 billion. Can investors still reap the rewards if they buy now? 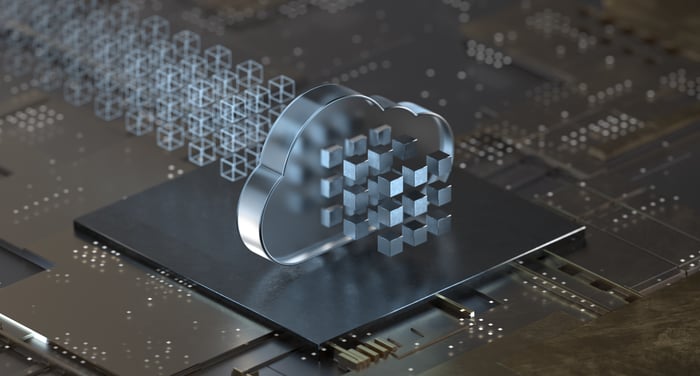 The Arweave peer-to-peer (P2P) protocol matches participants with excessive storage spaces on their servers or hard drives with those looking to store data. Currently, you pay a one-time fee of about $34 to store 1 gigabyte of data on the ArDrive. In comparison, Amazon Cloud charges about $0.02 per month to store 1 GB of data. So why would anyone bother using Arweave?

The answer is that data storage on ArDrive is permanent. A single fee up front, payable in AR, gives miners on the Arweave network incentive to continuously replicate the stored content. Network fees are more like endowments. Because the cost of data storage decreases over time as technology advances, the interest earned from the initial payment is more than enough to pay for the operating costs of the Arweave ecosystem.

There are already 300 decentralized applications (dApps) built on the Arweave blockchain, and ArDrive is only one of them. There's ArGo, which enables users to store entire websites as permanent archives. Then there's RedStone, which provides decentralized finance data sets, such as price feeds, to more than 1,000 digital currencies in a manner similar to Yahoo Finance, but for crypto. Its service puts it in direct competition with oracle coins such as ChainLink. Another notable highlight is Pianity, which enables artists to mint their soundtracks as nonfungible tokens (NFTs) and sell them on the Pianity marketplace.

Why does all this matter?

Arweave's potential total addressable market is huge. By 2025, market research firms estimate that the global data storage industry will grow to $137.3 billion at a rate of growth of 22.3% per year. Its exposure to NFTs is also a key catalyst for growth. In August, NFT trading volume on just one platform, OpenSea.io, surpassed $3.4 billion, representing a tenfold increase over the prior month. Finally, remember that smart contracts on most blockchains can't tap into real-world API (software that allow applications to talk to one another) like asset prices for their execution.

So there's definitely the opportunity for RedStone to fill in that gap. It would greatly expand the functionality of smart contracts, of which $624.38 million worth are processed per day on dApps. Overall, even though Arweave is only in the early stages of adoption, its $2 billion market cap doesn't seem that expensive. That's also considering that the Arweave project has multiple expansion routes and isn't simply a pure-play data storage coin, like Filecoin. It's an intriguing crypto that I would recommend crypto investors check out.

Could Arweave Be a Billion-Dollar Cryptocurrency by 2025?

Why Arweave Was Trouncing Other Cryptos This Weekend