COVID-19 testing volumes are up again.

It's been a topsy-turvy year for testing company Quidel (QDEL). Its business went from booming amid the worst of the pandemic to a significant drop-off, as vaccination rates rose and concerns about COVID-19 began to dissipate. Then came the delta variant and testing mandates, and now the company is back to being busy with high demand for its tests.

This month, the company released preliminary revenue numbers for its upcoming third quarter. It will release full results next month, and it looks like it is going to be another stellar quarter for the business. 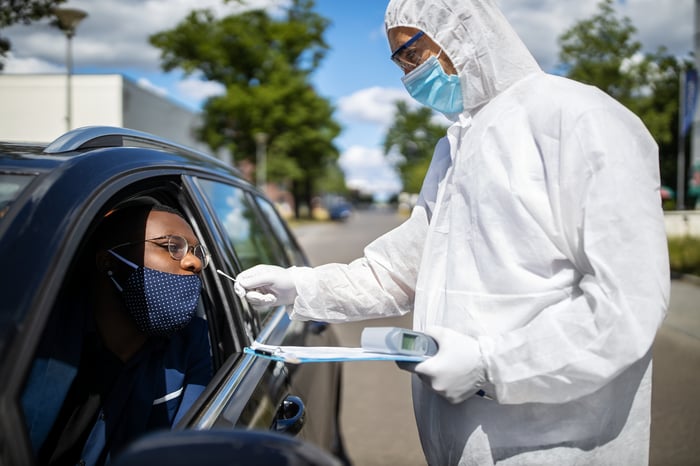 Quidel will report more than $500 million in revenue in Q3

On Oct. 7, Quidel announced that, for the period ending Sept. 30, its revenue will come in between $505 million and $510 million. At the top end of that estimate, it would be a 7% increase from the $476 million it reported in Q3 last year. It's also nearly triple the $177 million in sales the company posted for the previous three-month period that ended in June. The average analyst estimate for Q3 was just $377 million.

Demand is so strong that Quidel doesn't believe it will be able to fulfill all the requests, with CEO Doug Bryant noting that, "Employer demand has gone crazy." That's in large part due to the anticipated need for testing of employees. In September, President Joe Biden announced plans to mandate weekly COVID-19 testing for unvaccinated workers at all companies that have at least 100 employees.

Investors should continue to expect volatility

The danger with the healthcare company is that, while sales may be up in Q3, what happens in subsequent quarters can be anyone's guess. On the company's second-quarter earnings call as recently as August, Bryant said that "… guidance from CDC and the landscape of COVID testing seem to evolve daily." And, while the mandate for tighter rules for COVID-19 testing has led to a sudden surge in testing demand, investors need to be careful not to assume that will be here to stay.

As of this writing, than 66% of the U.S. population now has one dose of a COVID-19 vaccine and 57% of people are fully vaccinated. If those percentages continue to rise, the pool of unvaccinated employees to test will inevitably shrink. While employers are stockpiling COVID-19 tests right today, that may not be the case in a few months from now. That's what can make Quidel an incredibly volatile investment, since COVID-19 testing can play such a significant role in its earnings results.

Why I would steer clear of Quidel

A big reason I sold my shares of Quidel this year was due to the unpredictability of COVID-19. The fluctuation in revenue can make it difficult to gauge how the business is really faring. And that also discounts the value of any earnings or revenue multiples investors often rely on to assess whether a stock is a good buy.

If you were to look at Quidel's price-to-earnings (P/E) ratio and see a multiple of less than seven, you might think investors have missed a golden opportunity. But, with the company benefiting from a surge in demand over the past 12 months (and which may not be replicated in the future), it's not a number that's worth relying on.

Quidel's forward P/E multiple of 15 also looks cheap, but that is based on analyst expectations, which can vary significantly. For Q3, analysts had a broad range of revenue they were expecting from the company — from as low as $179 million to as high as $509 million.

Quidel's sales are volatile, so a safer strategy would be wait until the dust clears and COVID-19 isn't accounting for a significant portion of its revenue (I'd wait for the percentage to fall to less than 20%), and then reassess the business. Today, it's just too much of a moving target, and investors are probably better off looking at long-term investments that will provide their portfolios with some stability.

Why Quidel Stock Was Falling on Friday
415%