The era of 5G is here, and there are several ways to invest behind the improvements that faster download speeds will bring smartphone users. 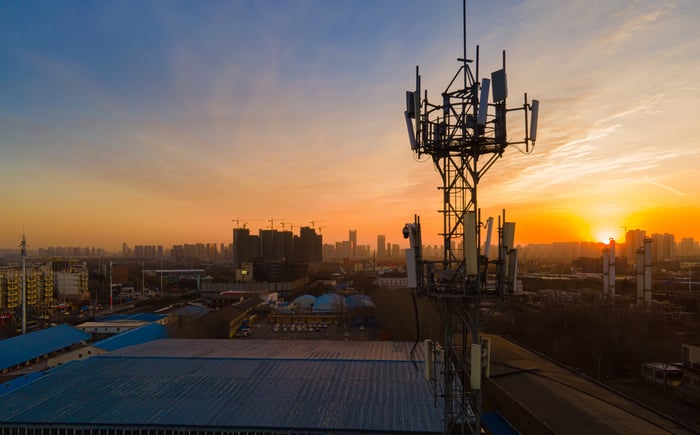 Apple is probably the safest stock to invest in 5G that still offers decent return potential. While Apple might look somewhat expensive at a price-to-earnings ratio of 27, analysts have been underestimating the iPhone maker for years. The stock has delivered multibagger returns over the last decade even though the brand was just as well known in 2011 as it is today.

Wait times for the newest iPhones are reported to be the longest in at least four years at more than four weeks. While Wall Street tries to figure out whether it's genuine demand or supply shortages creating the delays, the only thing that matters is that the 5G upgrade cycle is definitely here, and it's going to lead to more revenue growth for Apple over the next few years.

Apple started the year with an installed base of 1.65 billion devices worldwide, a new record. The introduction of 5G on the iPhone 12 drove strong revenue performance a year ago. Through the first three quarters of fiscal 2021  (through June), iPhone sales were up 37.5% year over year. The new iPhone 13 should pull in users that skipped last year's upgrade, especially once people get a look at the smoothness of the new screens on the Pro models.

The iPhone is the flywheel product for Apple, since strong sales tend to spill over to other products and services. All said, Apple is looking at a profitable stretch of growth and is a good bet for investors.

Micron is a leading supplier of dynamic random-access memory (DRAM), non-volatile memory (NAND), and NOR flash memory and storage products that are used in consumer PCs, data centers, and by some of the leading smartphone manufacturers. Long-term demand trends in the data center and 5G markets are driving a strong growth phase for the company, with revenue up 29% in fiscal 2021, which ended in September.

Micron's mobile business unit grew 26% in fiscal 2021 and accounted for slightly more than a quarter of its total revenue. Management is anticipating another strong year of growth, as 5G phones contain significantly more memory capacity than 4G phones.

Micron has supplied products for iPhones in the past, but a recent teardown of the iPhone 13 revealed that Apple chose to use chips from Micron competitors SK Hynix and Kioxia this time around. This isn't a problem for Micron, though, since the smartphone market is much bigger than Apple, with 5G smartphone sales expected to reach 500 million units this year.

Given the growth Micron is seeing across the data center, mobile, automotive, and industrial markets, the stock looks particularly attractive at a forward P/E of just 7.2. Throw in a small quarterly dividend of $0.10 per share (yielding about 0.15% at the current stock price), and investors are looking at one cheap stock to invest in the 5G growth cycle.

It's not just hardware suppliers that will benefit from 5G. People who play mobile games will see significant benefits, such as faster downloads, from the technology and Zynga is the company behind several popular mobile games, including FarmVille, Merge Magic!, Empires & Puzzles, and Words With Friends. The stock has delivered a return of 150% over the last five years, and the era of 5G could significantly boost player engagement and growth for this company.

Players using 5G devices will be able to download games with large file sizes much faster while away from their home Wi-Fi network, which could increase player engagement. 5G speeds will also bring major benefits to online multiplayer games, such as Zynga's CSR Racing. Overall, games will look better and play faster.

However, market participants are concerned about slowing growth in the near term, as Zynga numbers come up against high growth during the earlier days of the pandemic. As a result, the stock is down about 31% over the last few months. Given that mobile gaming is already the fastest-growing segment in the $175 billion video game industry, an investment in Zynga at the beginning of the 5G upgrade cycle could lead to stellar returns for investors over the next five years.