The thriving restaurant chain faces a difficult year-over-year comparison, but its strong momentum will help.

Chipotle Mexican Grill (CMG 1.33%) reports third-quarter 2021 financial results on Oct. 21, and investors have some key data points to pay attention to. The Tex-Mex fast-casual restaurant chain has managed well and profited during the past 18 months, while the rest of the industry has struggled to survive. Just this year, Chipotle's stock price is up 30%, almost doubling the S&P 500's return.

Here are three things shareholders need to know about this top restaurant stock before next Thursday. 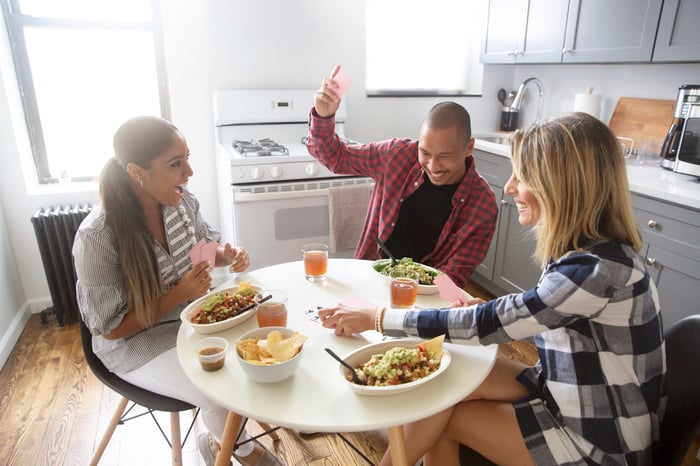 1. The shift to in-person dining

Unsurprisingly, digital sales experienced a huge boom during the pandemic. In the second and third quarters of 2020, digital revenue more than tripled year over year, underscoring Chipotle's readiness to serve hungry customers in ways most convenient for them, including curbside pick-up, drive-thru, and delivery.

This metric showed deceleration last quarter, climbing just 10.5% and accounting for less than half of Chipotle's total revenue. As pandemic restrictions lift and people feel comfortable eating out again, digital sales will certainly be under pressure. And this coincides with a rise in in-store dining.

"We've continued to make operational adjustments to adapt to the constantly changing environment, which has led us to recovering about 70% of in-restaurant sales thus far, while retaining about 80% of digital sales," CEO Brian Niccol said on the second-quarter earnings call back in July. Niccol said he believes that roughly 15% of customers use both in-person and digital channels, so the overlap isn't high today.

It'll be interesting to see what this figure is for the just-finished quarter. Any higher revenue cannibalization could be cause for concern for Chipotle.

And labor costs, another major expense for a restaurant, are expected to be in the low 26% range in the third quarter. This is up from 24.5% in the second quarter, and the rise is partly due to increased wages. The company's restaurant-level operating margin last quarter of 24.5%, which was the highest it's been since the third quarter of 2015, will most likely decrease as a result of elevated input costs.

Chipotle's proven pricing power insulates it somewhat from these inflationary pressures. After raising prices earlier this year in June, management says that menu price increases have so far been accepted well by customers, with the leadership team saying it's "really seeing no resistance whatsoever." Pay attention to additional commentary about this on the next earnings call.

And lastly, shareholders should focus on the number of new stores Chipotle opened in the quarter. After opening 56 new restaurants in the second quarter, the company was still on track to open 200 new locations (or slightly more) for the full year. With a footprint of 2,853 restaurants today, the business is closely approaching the 3,000 mark.

Management is planning for 70% of the new stores opened this year to be built with a Chipotlane, the company's popular drive-thru option. Hartung said, "New Chipotlanes are opening with about 20% higher sales compared to the non-Chipotlanes opened during the same time period." What's more, these locations drive more digital sales, with more customers ordering ahead, which is Chipotle's highest-margin transaction.

The business is well on its way to one day reaching its goal of operating 6,000 restaurants in North America. To continue expanding in this difficult economic environment is indicative of Chipotle's remarkable success.

Shareholders should now be prepared when the business reports third-quarter financial results on Oct. 21. The focus should be on the comeback of in-store dining, inflationary pressures, and the new-store pipeline.