Please ensure Javascript is enabled for purposes of website accessibility
Log In Help Join The Motley Fool
Free Article Join Over 1 Million Premium Members And Get More In-Depth Stock Guidance and Research
By Parkev Tatevosian, CFA – Aug 15, 2021 at 9:30AM

Chipotle (CMG 0.42%) shares are on fire. The stock is up 16% in the past month and 35% in 2021. The company moved quickly at the pandemic's onset to emphasize online ordering for delivery and pickup, and those decisions paid off.

Now that businesses are reopening, restaurant dining is making a return. Some investors are optimistic that the company will come out of the pandemic stronger than before. Management deserves credit for navigating the Covid shutdown, but is enthusiasm for the stock overdone? Those who argue that it is may not be off base. It certainly feels like the valuation is stretched. 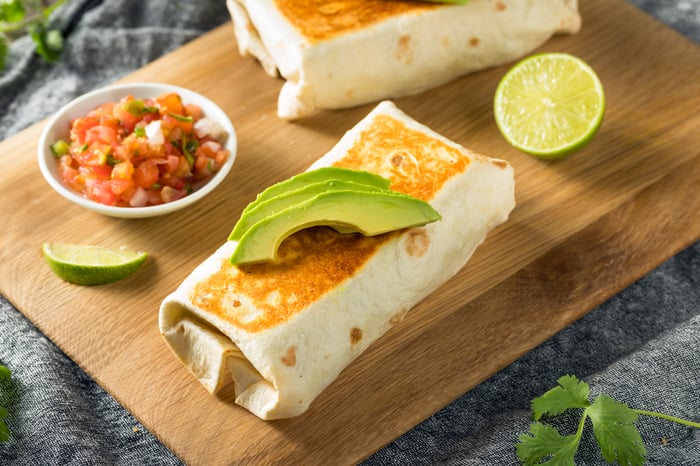 In its most recent quarter, Chipotle reported revenue growth of 38.7% from the same quarter last year. Remember, many restaurants were closed to diners in the year-earlier quarter. Chipotle was no exception, and it had to close its locations as well. With nearly all restaurants open in this year's second quarter, Chipotle had easy comparisons.

Chipotle regained 70% of in-person traffic as U.S. states lifted restrictions on dining. What's noteworthy is that Chipotle maintained 80% of digital orders during the quarter amid the economic reopening. This suggests that customers who are dining at Chipotle restaurants also are continuing to order for delivery or pickup. Some had expected a significant decline in online orders as restaurant dining returned.

The success in rebuilding in-person dining while holding onto much of its online business gave Chipotle's management the confidence to increase its long-run store revenue targets. The company hit its previous goal of adjusted unit volume (AUV) of $2.5 million and raised it to $3 million. Chipotle has 2,850 stores, with plans to expand to more than 6,000, so raising the AUV by 20% could have major consequences.

The quarter was impressive, no doubt, but keep in mind it was the first quarter of reopening after the onset of the pandemic. It remains to be seen if Chipotle can maintain its robust level of digital sales as in-person dining rebounds. Moreover, forecasts for AUV and store-level cash flows are not certain to materialize. The company hit its previous goal for AUV, which put it in a position to raise the target. And the stock price has responded to the broader economic reopening, indicating that the positive news may already be priced into the stock. After the rise, Chipotle is trading at a forward price-to-earnings ratio of 73.5.

Investors considering buying Chipotle shares would be better served by waiting for the stock to pull back. The alternative would be to wait for at least another quarter of results and more evidence that the company can sustain sales in both in-person dining and online ordering.