A key gene-editing readout had Cathie Wood shuffling her portfolio.

After the Food and Drug Administration paused Allogene Therapeutics' (ALLO -5.24%) clinical trials last week, the stock was crushed. It has rebounded 31% this week through Thursday, according to data from S&P Global Market Intelligence. That still leaves it down 30% since the beginning of the month.

The FDA's intervention appeared to spur trading by ARK Invest in Beam Therapeutics (BEAM -0.70%), Intellia Therapeutics (NTLA -3.07%), and Schrödinger (SDGR -5.36%). Beam, Intellia, and Schrödinger were up roughly 13%, 9%, and 10%, respectively, this week through Thursday, also according to data from S&P Global Market Intelligence. 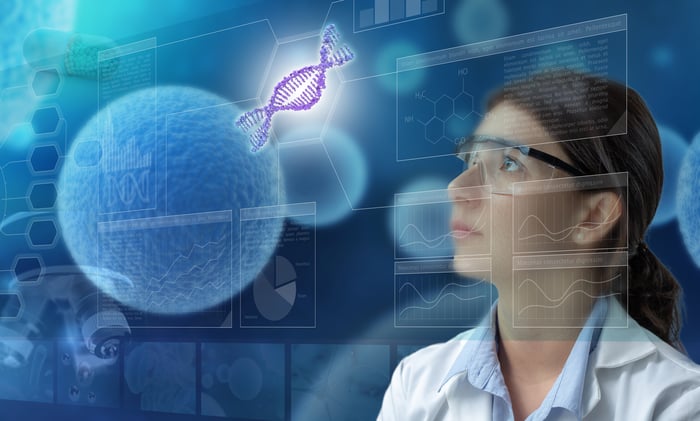 The FDA hold was placed after a bone marrow biopsy revealed a chromosomal abnormality in one of the patients in the clinical trial for Allogene's ALLO-501A therapy.

Although the various ARK Invest ETFs hold no shares of Allogene, the disappointment prompted a sell-off in many gene-editing stocks last week. That prompted Cathie Wood to make some trades.

In addition to buying almost 1 million shares of CRISPR Therapeutics (CRSP -1.51%) this week (a company whose own data received a lukewarm reception last week), Wood's funds added to their positions in Beam Therapeutics and Intellia Therapeutics while making a small sale of Schrödinger.

As it stands, ARK owns about 12% of Beam at an average cost about 10% below where it currently trades. It holds a little over 8% of Intellia, a position that has gained nearly 250%. For Schrödinger, it owns about 3.5% of the outstanding shares and is sitting on a 24% loss.

There are bound to be setbacks with any new therapy. This one slightly dampens the enthusiasm for gene-editing after Intellia and Regeneron shared positive results from the first in-human application of the technology in June.

If Cathie Wood's trades are any indication, she remains confident in the technology. For investors with a long-term horizon and appropriately diversified portfolios, it could make sense to add on the weakness.

The volatility is a good reason it can be beneficial to take a basket approach with emerging industries, buying a small portion of several companies. With so much potential, it only takes one big winner to make the basket a successful investment. So far for Wood, that's Intellia.

Why Allogene Therapeutics Stock Is Getting Hammered Today

4 Companies That Could Upend the Pharma Industry