Please ensure Javascript is enabled for purposes of website accessibility
Log In Help Join The Motley Fool
Free Article Join Over 1 Million Premium Members And Get More In-Depth Stock Guidance and Research
By Jim Halley - Jul 29, 2020 at 9:27AM

Their groundbreaking research on CAR T-cell therapies could revolutionize how certain cancers are treated in the future.

Chimeric antigen receptor T-cell therapies to fight cancer have been around for a decade, but pharmaceutical companies are just beginning to scratch the surface on their potential applications.

In a CAR T-cell therapy, a person's T-cells -- part of the immune system -- are modified by implanting them with a chimeric antigen receptor (CAR for short), which is a synthetic molecule that helps the cells recognize and fight cancer. The treatment ideally multiplies and remains in the body. The U.S. Food and Drug Administration (FDA) approved the first two CAR T-cell therapies in 2017.

CAR T-cell therapies have the potential to cure, sometimes with just one dose -- and sometimes when other methods, such as chemotherapy or bone marrow transplants, have been ineffective. 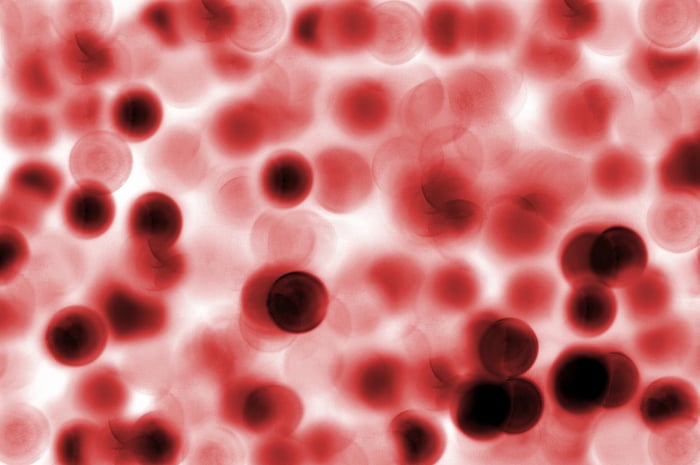 Novartis was first on the scene

In 2017, after working five years with the University of Pennsylvania, Novartis (NVS 0.32%) became the first biotech to have an FDA-approved CAR T-cell therapy with Kymriah (tisagenlecleucel). Its first use was for the treatment of patients up to age 25 for acute lymphoblastic leukemia who had not seen progress through chemotherapy or other means. In 2018, the company got FDA approval to use Kymriah to treat large B-cell lymphoma.

In the second quarter, Kymriah had $118 million in sales, an increase of 103% year over year.

Gilead, thanks to Kite, is an early leader in the field

Gilead Sciences (GILD 1.84%) has been in the news for its coronavirus treatment drug, remdesivir, but the company is a major player in CAR T-cell therapy, thanks to its subsidiary Kite Pharma, which it purchased for $11.9 billion in 2017.

Last week, the FDA approved Tecartus (brexucabtagene autoleucel) to treat adults with relapsed or refractory mantle cell lymphoma (MCL), a rare type of B-cell non-Hodgkin's lymphoma. Tecartus was approved after 87% of patients responded to the treatment, including 62% who had a complete response (the absence of all detectable cancer after treatment), in a phase 3 trial.

It is only the third CAR T-cell therapy approved by the FDA, and it's the second for Kite. The company received FDA approval in 2017 for Yescarta (axicabtagene ciloleucel) to treat relapsed and refractory diffuse large B-cell lymphoma.

Yescarta is already having a positive impact on Gilead's bottom line, with the latter's shares up more than 13% this year. In the first quarter, the treatment brought in $140 million in sales, a rise of 44% year over year.

The early use of CAR T-cell therapies has been mostly against blood cancers, such as the various types of leukemia. But researchers at TCR2 Therapeutics (TCRR 4.14%) are in trials to test the technology's efficacy against solid tumors. On Sunday, management said it was encouraged that in preliminary data from a phase 1/2 study, its lead candidate, TC-210, shrank tumors in all five patients with mesothelin-expressing cancers. (Mesothelioma affects the lining of the lung, abdomen, and chest.)

Shares in the company's stock are up more than 8% this year and more than 51% in the past three months. The company said it plans to have about 50 patients in phase 2 of the trial, including those with non-small cell lung cancer and bile duct cancer, as well as ovarian cancer and mesothelioma.

CAR T-cell therapies can be quite expensive. A single dose of Gilead's Yescarta is $343,000, according to drugs.com. The primary reason the therapies cost so much is because they are designed exclusively for one person, using that patient's own T-cells.

Allogene Therapeutics (ALLO 7.78%), however, is looking at ways to deliver off-the-shelf CAR T-cell therapies, using T-cells from healthy donors and altering them to reduce autoimmune responses so they might be safe and adaptable to any patient with a particular type of cancer.

The company says a manufacturing run of one of its AlloCAR therapies would be capable of helping 100 patients. On top of that, since the treatments wouldn't have to be designed for individual patients, they could be made available immediately. That's a huge factor for some cancer patients who don't have time on their side.

Allogene's stock is up more than 46% this year, though it isn't turning a profit yet. It has four programs in phase 1 trials to fight various types of blood cancers, including two therapies to treat relapsed or refractory non-Hodgkin's lymphoma, single therapies for refractory multiple myeloma, and separate trials for pediatric and adult acute lymphoblastic leukemia patients.

The treatments have a dangerous side

The treatments are not without risks. The FDA's approval of Tecartus carries a boxed warning for neurologic toxicities and for cytokine release syndrome, a response to the activation and proliferation of CAR T-cells that can cause fever or flu-like symptoms. Both reactions can be life-threatening.

The future of investing in CAR T-cell technology

The field is still so new that's it hard to tell which companies within it will benefit the most. But thanks to their financial and marketing backing, Novartis and Gilead look like the strongest bets. Both have enough other revenue streams that they can continue to plunk money into CAR T-cell therapies until they pay off.

I think Allogene has the biggest potential to upend the industry, however, if its off-the-shelf therapies can come to fruition. At present, the biggest thing holding CAR T-cell therapies back is the cost, and off-the-shelf technology would exponentially expand their use.