Ford's sales for the period were hurt along with most everyone else's, but it was actually able to beat expectations and management says sales improved as the quarter progressed. Because the automaker also continued its dominance in the truck market and sales of its electric vehicles are revving up, it's no wonder everyone is talking about Ford's stock. 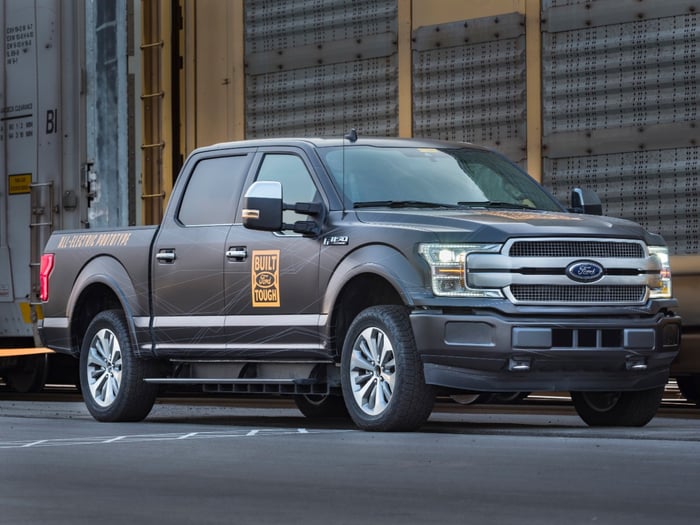 Ford fills up the tank

The seasonally adjusted annual rate (SAAR) of sales is down to just 12.2 million units, some 27% below the 16.7 million vehicles sold in 2020, but analysts forecast the they will recover to 15.5 million vehicles by the end of the year. The lack of computer chips means it will still fall short of last year's total.

Cars and trucks are being built, but they're sitting in storage lots until the computer chips arrive and can be plugged in. That might already be happening at Ford.

September sales at the automaker surged 34% compared to August, leading analysts to believe Ford may have received a supply of chips that it was able to install. That would have allowed it to move the vehicles to dealer lots where they were quickly bought out.

The automaker said it sold more than 156,600 vehicles last month, more than half of which were trucks, helping to lift the third-quarter total to 400,843 vehicles (year-to-date total sales of 1.33 million are down 6.7% from last year). F-series truck sales came in one sale shy of 172,800, comfortably ahead of General Motors Silverado sales of 123,067 and Stellantis Ram trucks sales of 121,704.

The performance had Cox Automotive executive analyst Michelle Krebs saying not only did Ford close out the period stronger than how it began, but it was now starting the fourth quarter "with somewhat better supply than it started the third quarter and better than some of its key competitors."

Ford noted it was starting the fourth quarter with 236,000 vehicles in its inventory, 21,000 more vehicles than it had one month prior.

Although that's dramatically lower than the year ago figures, it puts Ford well ahead of most of the competition and gives it at least a temporary competitive advantage of having vehicles in stock that consumers can buy. It has 42 days supply of new inventory, giving it a cushion, compared to Hyundai (39 days), Nissan (27 days), Chevy (26 days), and Honda and Toyota (both just 17 days).

While that's promising, what people are really watching are Ford's EV sales. The automaker said it hit a new record, with sales of its entire EV fleet surging 92% in September compared to a year ago to hit 9,150 vehicles.

Equally impressive, sales of the Mustang Mach-E rose 9.2% for the month to 1,578 vehicles. Ford was right to boast that cumulatively it has sold 18,855 Mach-Es to date, putting the EV second only to Tesla's Model Y in full-electric SUV sales.

Ford also noted that reservations of its forthcoming F-150 Lightning had jumped to 150,000 from 100,000 at the end of the second quarter. While reservations aren't sales, the vehicle maker has had good conversion ratios from reservations to deliveries on the Mach-E.

There were some 50,000 reservations of the electric Mustangs made during the order period, or 100% of the expected first-year production run, which Ford said it expects to fill over the first 12 months of sales. So there's good reason to suspect the electric pickup truck will fare just as well.

Ford could pull further away from its truck competition when the F-150s hit dealer lots, though the chip shortage might delay when that happens. Still, it will be before GM has its EV Silverado pickup on dealer lots (not expected until 2023) or the Dodge EV Ram is out (expected in 2024),   and Ford's more muscular manufacturing capabilities and dealer network gives it the advantage even though Rivian is already beginning to deliver its R1T.

In the dent and ding section

Because the automaker's stock trades at some deeply discounted valuations despite having doubled in price over the past year, it represents an excellent opportunity for investors to buy in ahead of the market realizing it has mispriced its shares.

Ford's stock goes for just 8 times earnings, and because Wall Street expects it to expand those profits at an incredible 72% compound rate annually for the next five years, shares are trading for just a small fraction of that growth rate.

While that seems a crazy ambitious projection, it suggests that if Ford is just mildly successful in its approach and attains only some of what analysts believe, it's valuation has room for significant expansion.

Listen, Ford has badly underperformed the broad market index in total return for decades. It's been a horrible laggard, but about three years ago it began outperforming the S&P 500 though this year it really widened the gap. The auto market has changed and Ford is transforming with it, sometimes even leading the way.

It's in a competitively advantageous position now and has a head start -- at least in certain EV markets -- that ought to benefit it and investors. And if Ford ends up reinstating its dividend, that would juice the value of buying the automaker's stock now.