The companies' latest reports mirror each other in some important ways.

Major automakers Ford (F 2.71%) and Honda (HMC 1.32%) both reported their September sales data on the same day, Monday, Oct. 4, and both showed startlingly similar trends. Both naturally showed a big negative effect from the ongoing chip shortage on sales. However, both also highlighted strong demand for a specific type of vehicle, and similar results for their electric vehicle (EV) segments, giving a snapshot of how the passenger vehicle market is developing overall. Here's what they reported and what it means for their future.

With manufacturing slowed to a crawl by chip shortages and inventories hollowed out by high demand, Ford's total sales dropped 17.7% year over year for September. Narrowing the focus to retail sales, the plunge from September 2020 was 20.8%. The drop was strongest among cars, which saw sales drop 80.3% to just 2,800 individual vehicles sold. 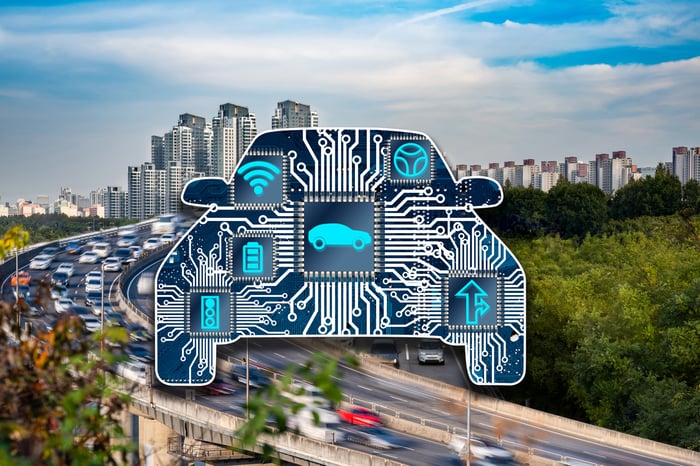 While these sales figures underline the difficult conditions Ford and other automakers face right now, there is also a trend of improvement from August. Retail sales rose 34.4% month over month, putting Ford in first place for American vehicle sales in September. A key factor driving this is increased production in August, boosting the in-transit inventory for some car models, such as the Bronco, by as much as 200%. The company reports it had approximately 215,000 vehicles in stock at the start of September, and 236,000 at the beginning of October. This is despite massive orders, with 31% of retail sales filling pre-existing orders from customers.

Honda, which has recently made the news with its announcements about robots and space travel, reported almost exactly the same trends as Ford. Like Ford, Honda saw a significant drop in year-over-year sales as the chip shortage continued hamstringing production. Overall, sales dropped 10.9% for American Honda, and 11.9% for Honda worldwide. Once again mirroring the Blue Oval, cars were the hardest hit, with sales down more than 20%, while trucks saw only a 4.4% to 4.7% decline.

American Honda's executive VP Dave Gardner noted demand remains very strong, however, stating the company is "encouraged by the record sales of Honda models where we have adequate inventory." Light trucks were a bright spot for the company. Three of the best-selling models were the Honda HR-V subcompact SUV, and the midsize Passport and Pilot SUVs. Its midsize Ridgeline pickup only saw a 2.6% decline in sales year over year, far below the double-digit sales drops in most car models.

Electric vehicles from Honda also appear to be booming. Year-to-date figures up to the end of September show a near doubling since last year. During the first nine months of 2020, the company sold 42,874 EVs, while this year customers have purchased 82,446 EVs. This is an increase of 92.3%, with Honda noting "electrified vehicles set a new annual sales mark." It should be noted, however, that EV sales fell 4.5% month over month and year over year in September, likely reflecting the chip shortage and port problems.

What it means for the automakers going forward

Both Ford and Honda show similar patterns in their September results, increasing the chances these demonstrate real trends and are not simply an artifact of one company's operations. Both reported high levels of demand and pre-orders, along with strong demand for SUVs and pickup trucks, and rapidly growing interest in their electric vehicles.

The overall results look bullish for both of these well-known automotive stocks. High demand and high preorders, along with quick inventory turnover, show they can expect a powerful surge in sales once the chip shortage eases, whether that is next year as some industry commentators assert, or not until 2023 or even 2024 as more pessimistic analysts predict.

The strong increase in EV sales and reservations for both Honda and Ford shows the pivot to electric vehicles is still also vigorously underway. The EV strategies of both companies, including Ford's huge investment in switching over to a 50%/50% mix of internal combustion engine (ICE) and EV models by 2030, also look justified in light of these figures, meaning they could also end up as significant electric car stocks, too.