Please ensure Javascript is enabled for purposes of website accessibility
Log In Help Join The Motley Fool
Free Article
Join Nearly 1 Million Premium Members And Get More In-Depth Stock Guidance and Research
By Will Healy – Oct 26, 2021 at 7:05AM

Verizon (VZ -0.77%) stands out as one of three companies offering 5G service in the U.S. However, investors have at least three compelling reasons to buy this stock that are unrelated to the 5G oligopoly, along with at least one obstacle that might give those same investors pause.

Let's take a closer look at this telecom stock to understand whether its advantages can overcome a considerable drag on this company's future.

Verizon's focus on service is hardly new. RootMetrics recently gave Verizon a 16th consecutive annual award for its network experience, while it won the most awards from JD Power for network quality for the 27th year in a row. 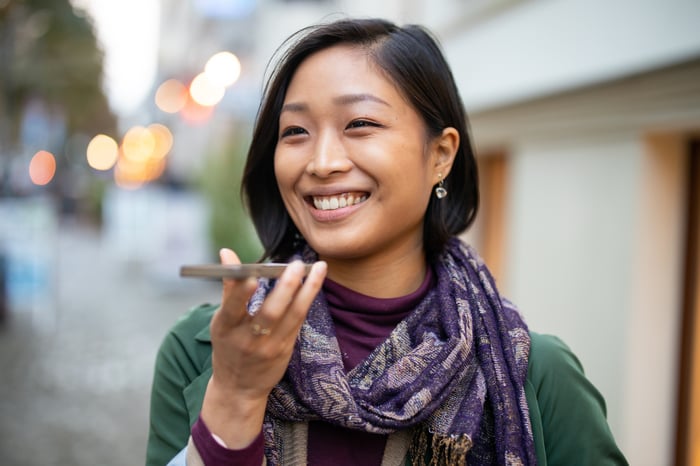 The company has also made a key investment to make sure it stays on top amid the transition to 5G. Early in the year, the company spent nearly $53 billion on C-Band spectrum. Spectrum amounts to wireless real estate, allowing Verizon exclusive use of a high-value frequency in a specific market, and Verizon has spent more on C-Band spectrum than AT&T (T -2.22%) and T-Mobile (TMUS -1.20%) combined.

Verizon has also taken a leap forward in the network-as-a-service (NaaS) business. NaaS is a subscription data service connecting users and devices to clouds and data centers. This service can connect artificial intelligence (AI) and Internet of Things (IoT)-driven applications ranging from autonomous vehicles to digital retail platforms. It also provides the company with a source of income that did not exist under 4G.

Additionally, AT&T's plan to slash its dividend makes Verizon the leader among dividend stocks in this industry. The company recently hiked the payout for the 15th straight year, taking the annual payout to $2.56 per share, a cash yield of around 4.8% for new investors.

This is significant since that makes Verizon's dividend more than triple the average dividend yield for the S&P 500 of 1.3%. The rate of return also exceeds the 4% withdrawal rate that investment advisors recommend for retirees, making Verizon a likely choice for income investors. While last year's payout increase of 2% fell short of the 5.4% increase in the consumer price index, the consistent increases also give income investors some protection against inflation.

Income investors can buy this income stream at a bargain. As of the time of this writing, Verizon sells for just 11 times earnings. This is well under T-Mobile's price-to-earnings (P/E) ratio of 38.

Furthermore, its latest earnings report indicates some undervaluation. In the first three quarters of 2021, revenue of just under $100 billion climbed 6% compared with the first nine months of 2020. Over the same period, net income surged 31% to almost $18 billion. Reduced interest costs, income from non-core sources, and slower growth in operating expenses accounted for the boost in profits.

Additionally, this led to a free cash flow of just over $17 billion for the first nine months of 2021. This fell slightly from the $18 billion in free cash flow in the same period last year. Nonetheless, it also left enough cash available to cover almost $8 billion in dividend expenses during that time.

Unfortunately, Verizon needed a large amount of the remaining free cash flow to cover its massive debts. As of the end of the third quarter, Verizon held $151 billion in total debt. This is not only an increase from $129 billion at the same time in 2020, but it also stands far above the total equity of just $78 billion.

The company accumulated most of that additional debt with the aforementioned investment in C-Band spectrum. Despite this higher debt obligation, Verizon has spent almost $3 billion in interest expenses so far this year, 13% less than at the same point in 2020. The total debt has also begun to fall from its $159 billion peak in the first quarter.

Still, the debt may have placed pressure on the stock. It has lost 9% of its value in 2021, even amid rising profits and the increased adoption of 5G.

Despite its debt obligations and stock struggles, investors should consider Verizon stock. Admittedly, the heavy debt burden will strain the balance sheet for the foreseeable future. However, the company's cash flows are steadily reducing that debt, and the spectrum investment should pay dividends in improved service quality.

The double-digit percentage earnings growth amid a P/E ratio of 11 could also draw investors back to the stock over time. Considering the dividend yield of almost 5%, this could eventually make Verizon one of the smartest dividend stocks to buy.