The fast-casual restaurant chain looks unstoppable after its latest round of results.

Chipotle Mexican Grill (CMG -5.57%) has been a big winner during the pandemic, but its third-quarter earnings report made clear why the fast-casual restaurant chain is one of the best in the industry. 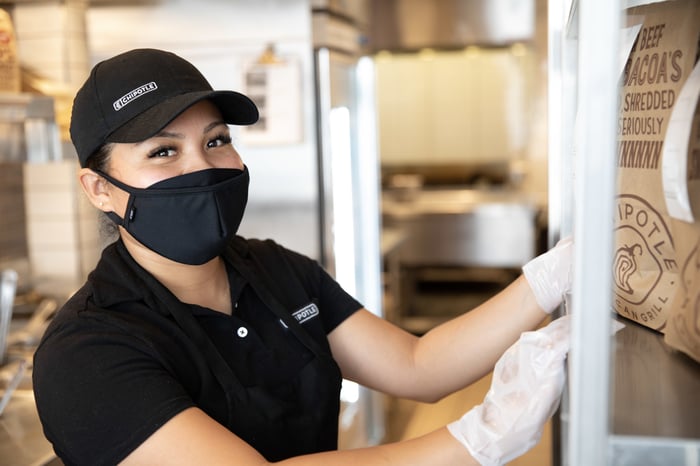 Those improvements came at a time when the company is still dealing with a number of pandemic-related challenges, including supply chain constraints, labor shortages, wage and product inflation, and the delta variant.

While the stock is pricey following its blowout growth during the pandemic, the recent report shows why Chipotle is joining the ranks of blue-chip stocks, or names that you can comfortably buy and hold knowing they'll deliver reliable results. Here's why.

It's the dominant fast-casual player

There was a moment a few years where Chipotle's status as the fast-casual leader appeared to be in jeopardy. Investors were piling into alternatives like Zoe's Kitchen, Potbelly, and Noodles & Co., eyeing them as the next Chipotle. Meanwhile, others believed that competing concepts like Qdoba, Baja Fresh, and Lime Fresh Mexican would steal Chipotle's thunder. What made Chipotle special, they argued, was the assembly line model, and that could be applied to any number of different restaurant concepts.

It's now clear that isn't the case. Those other restaurant chains have mostly just held steady or faded away, while Chipotle has thrived during the pandemic. The fast-casual model that Chipotle pioneered is not the only thing that makes it special. Chipotle stands out due to its great-tasting food, as well as its commitment to classic cooking techniques, sustainable agriculture, and hormone-free meat and dairy. In recent years, the company has built a digital model that customers love. About half of its sales this year have come from the digital channel and digital sales increased in Q3 even as it lapped a quarter when pandemic restrictions were much tighter than they are today.

Chipotle will face challenges again, but competition is not going to knock the company off of its pedestal.

The unit economics are great

In terms of profitability, Chipotle has one of the best models in the industry, and it keeps getting better. The third quarter is generally its most profitable, as the summer months encourage more spending at restaurants. The company just posted a 12.3% overall operating margin, up from 6.7% in the year-ago period. That was actually below the 13.2% the company reported in the second quarter, but both figures were well ahead of what the company has done at any time since the E. coli outbreak.

Restaurant-level operating margin, arguably the company's most important metric, also soared in the third quarter. It rose from 19.5% in 2020 to 23.5% in the latest report, which is happening even as the company has passed along price increases to help absorb wage inflation and higher freight costs.

Because Chipotle doesn't franchise, it keeps all of the profits its restaurants make. The restaurants themselves offer a cash-on-cash return of 60%, and the company hopes to drive that number to 80% or even 90% in the coming years. In other words, the incremental annual profit the company makes from opening new restaurants will be nearly as high as the cost to build them. That's incredible leverage with new openings.

The growth path is still long

Chipotle is nearly 30 years old, but the company has fewer than 3,000 restaurants. McDonald's, by contrast, has roughly 14,000 locations in the U.S., and many of its fast-food peers have at least double the total Chipotle has today.

Management said on the earnings call that its long-term goal is to operate 6,000 restaurants in North America, but that's probably at the lower end of the range the market would support. The growth of the digital channel and Chipotlanes, the company's version of drive-thru, give it the ability to penetrate parts of the country and real estate models that a traditional Chipotle wouldn't allow for. A Chipotle by the interstate, for example, becomes more tenable with the help of a drive-thru.

Still, just doubling its current footprint leaves plenty of room for growth, and at its current rate of opening 200 restaurants a year, it would take Chipotle 15 years to achieve that. There's also the international market, which the company has yet to execute on.

Chipotle has explored alternative restaurant concepts like ShopHouse and Tasty Made with disappointing results so far, but there's still plenty of growth left for its burrito-focused restaurant concept. As it approaches an average annual revenue per unit of $3 million, profitability should improve exponentially.

This restaurant stock may be pricey today, but it trades at that level for good reason. Chipotle is executing extremely well and its concept is still not being replicated very well by competitors in the restaurant industry. It's the kind of stock you can feel comfortable holding forever.