Here are a few highlights from the second-quarter earnings report.

It may have taken a global pandemic, but Chipotle Mexican Grill (CMG 0.44%) is performing as well as it ever has.

Share prices of the burrito maker surged to an all-time high Wednesday after its posted record-adjusted earnings per share of $7.46 in its second-quarter earnings report. The stock price has more than quadrupled from its low point early in the pandemic as the company's digital platform has taken off. It's now well-positioned to capitalize on the economic reopening as customers begin to eat in restaurants again.

Chipotle management elaborated on the company's strengths and key initiatives during the earnings call. Here are three quotes investors should take a look at. 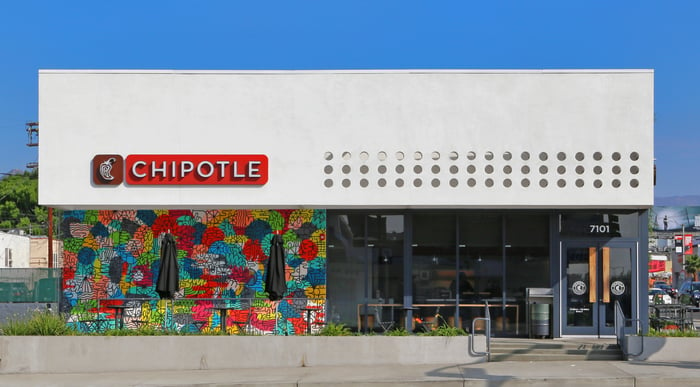 1. A take on what makes Chipotle unique

CEO Brian Niccol best summed up Chipotle's growth and what makes it unique in the restaurant industry when he said, "Over the past few years, Chipotle has evolved to a point where we now have two sizable businesses: in-restaurant as well as our record-breaking digital platform that are helping us become a real food focused digital lifestyle brand."

The company's digital channel has come to the forefront during the pandemic, bringing in nearly half of its total revenue in the second quarter. It's also telling that the company now sees its digital channel and in-restaurant sales as two separate businesses that cater to different customer occasions and different customers in some instances. The digital option drives incremental sales for the business because it allows customers to seamlessly order ahead for pickup or get delivery -- something they couldn't easily do just a few years ago.

2. Insight on the power of Chipotlanes

The digital platform has also enabled Chipotle to do something most rival fast-food companies take for granted -- opening drive-thrus, which it calls Chipotlanes. Because of Chipotle's assembly line format, ordering through drive-thru was unwieldy for most of its history, but digital ordering eliminates that friction point.

The company has said that most of its new restaurants will have a Chipotlane, and in the second quarter, 45 of its 56 store openings had a Chipotlane. CFO Jack Hartung said, "As I've said before, the best returns we can generate are by investing in more Chipotlanes."

He went on to note that new restaurants with Chipotlanes are opening with 20% higher sales volumes than non-Chipotlane restaurants, and they also generate higher margins since they receive more digital pickup orders, which is Chipotle's highest-margin transaction.

Niccol echoed Hartung, noting that Chipotlane restaurants give customers every access point, including picking up your order in your car. He added, "We're going to be focused on building as many Chipotlanes as possible."

3. There is potential for margin expansion

Chipotle is now approaching its former peak average unit volumes (AUVs) of $2.5 million, where they stood before the 2015-16 E. coli crisis. Restaurant-level operating margin hit 24.5% in the second quarter, still below its former peak of 29%. However, that figure is improving quickly with the post-pandemic recovery and the benefit of digital pickup orders. The company is now focused on driving AUVs to $3 million.

Management noted on the call that incremental sales carry profit margins of roughly 40% at this stage. Hartung said, "However, we maintain our goal of being able to pass through approximately 40% of incremental sales to restaurant cash flow, which is an important piece of our earnings growth potential."

Additionally, the company said it was targeting an increase in cash-on-cash returns, meaning the annual cash profits it gets as a percentage of new restaurant construction costs, from around 60% today to 80% or even 90%, numbers that would make any real estate developer envious.

Both of those numbers are a reminder that the restaurant stock still has enormous profit potential, especially after it just posted a 13% operating margin in the second quarter.

With digital sales on fire, a strong real estate pipeline, and demand for dining in restaurants returning, Chipotle's future looks as bright as ever.