The stock sank after the company lowered its revenue forecast.

Beyond Meat (NASDAQ: BYND) has been cooking up great returns for investors over most of its time as a publicly traded company. The seller of plant-based protein products rose more than 130% since its initial public offering in May 2019 through June of this year. But over the past four months, the shares have been sliding. They've dropped more than 35%.

The company lost out on sales of its products to restaurants during the worst of the pandemic. That area has recovered. Still, troubles may not be over for Beyond Meat. Most recently, the company lowered its outlook for third-quarter net revenue. This is ahead of its full earnings report next month. As a result, the stock tumbled 10% in one trading session. Now the question is: Have investors lost their appetite for this once dynamic stock? Or is this movement temporary? Let's take a look. 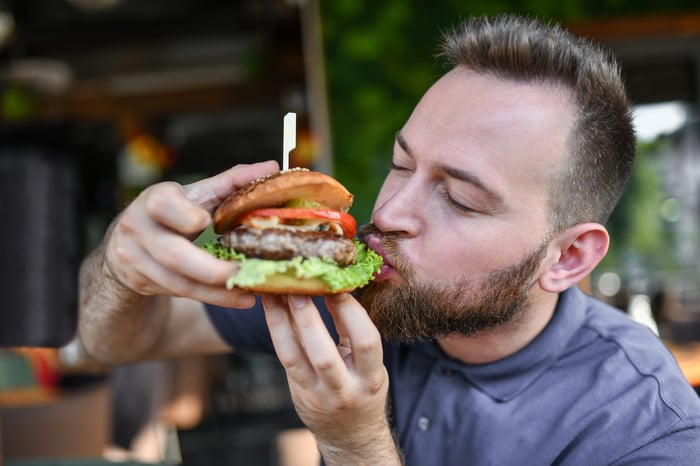 During the pandemic, Beyond Meat's retail business flourished. Two factors helped. First, a shortage in traditional meat products prompted some meat-eaters to try Beyond Meat's products. Second, consumer stockpiling resulted in sales gains. At the same time, as mentioned, sales to foodservice businesses sank. That's because many restaurants closed or operated at reduced capacity.

Still, Beyond Meat managed to report record revenue -- and double-digit revenue growth -- as the pandemic raged. That was in the second quarter of last year.

Fast-forward to the second quarter of this year: Foodservice revenue soared. But sales to retail outlets looked slimmer. That's because the point of comparison -- last year -- reflected exceptionally low foodservice numbers and exceptionally high retail numbers. For that reason, it will be important to look at foodservice and retail sales numbers over the next couple of quarters to get a true idea of the company's growth prospects.

Here's what we know about the third quarter. Beyond Meat says various factors weighed on revenue. One was the spread of the delta variant. For instance, the increase in coronavirus cases hurt business for Beyond Meat's restaurant customers. The company also noted that customer labor shortages meant it couldn't expand distribution as quickly as planned. Another problem: Beyond Meat suffered from a longer-than-expected decrease in retail orders from a Canadian distributor.

Some of these issues are temporary. They may hurt Beyond Meat in the near term. But they won't necessarily spell disaster in the long term. For example, once the pandemic has eased or come to an end, business at restaurants is likely to return to normal. And that opens the door to steady revenue growth for Beyond Meat.

The company right now is at the start of a potentially huge growth story with McDonald's. Back in February, the two companies launched a partnership to co-develop plant-based items for the McDonald's menu. Now, they plan to test a McPlant burger in eight U.S. locations as of next month.

As for retail, I'm really not expecting many diehard meat-lovers to go for a Beyond Burger. Beyond Meat's audience will remain those who don't always want traditional meat in their plates. And there are many people in this category. More than three-quarters of Americans aimed to add plant-based products to their grilling menu this past summer, according to VegNews. The report cited DKC Analytics data.

But what does all of this say about investment in Beyond Meat? Some investors may indeed be losing their appetite for the company. The triple-digit quarterly revenue gains seen before the pandemic may not be on the menu any time soon. Down the road, competition remains a risk. Big companies such as Tyson Foods and even startups offer rival products -- and a risk to market share and margin.

Foodservice partnerships could offer a bright spot. Success with the McDonald's project could be big for Beyond Meat. Before the pandemic, foodservice represented a larger portion of total revenue than sales to retailers. Still, investors may decide to wait for more positive signs from Beyond Meat before indulging in this food stock.