Johnson & Johnson beat analysts' earnings expectations in the third quarter. But does the valuation make the Dividend King a buy?

It's a simple fact of life that bills are consistently due every month, quarter, or year. That means if you're going to be able to cover your bills with dividend income, then neither can your dividend stock portfolio take a holiday or vacation.

So how can a retiree, or someone planning for retirement, build a steady income stream to pay their bills?

A great way to construct a reliable income portfolio is by purchasing only the highest-quality dividend stocks, measured by a company's consecutive years of dividend increases and the direction of its earnings per share (EPS) growth over the years.

I believe diversified healthcare giant Johnson & Johnson (JNJ 0.50%) could be a great fit in an income portfolio. Let find out why, and also see whether its stock is currently a buy. 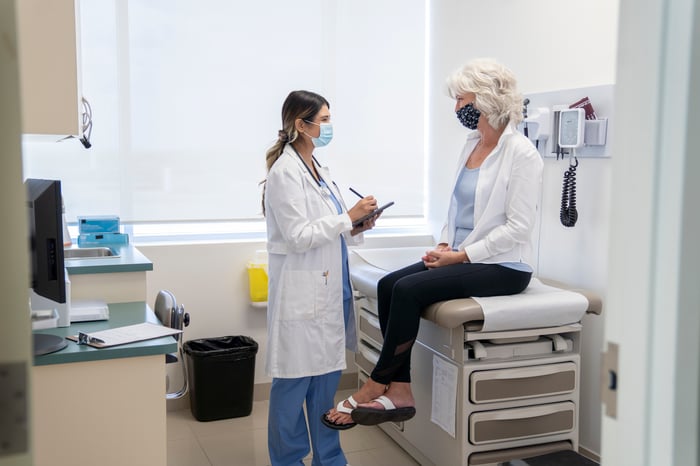 An earnings beat and upped guidance

While the New Brunswick, NJ-headquartered company missed analyst estimates for revenue by less than 2% in the third quarter, the stock blew analysts' EPS estimates away.

The company also reported $2.60 in adjusted diluted EPS, a huge 18.2% growth over the year-ago period given its massive size, and an eye-popping 10.6% higher than consensus estimates.   This is nothing short of a testament to J&J's resiliency in the COVID-19-driven pandemic that even caught Wall Street analysts off guard.

Management increased guidance for the full year that’d equate to revenue growth of 14.2%, and EPS growth of 22%, at the mid-point over last year, a solid growth by any stretch of imagination.

The largest segment is the most profitable

While J&J's consumer health, pharmaceuticals, and medical devices segments all grew in the third quarter, the pharmaceuticals segment made up 55.7% of the healthcare giant's revenue in the third quarter. In fact, this segment also contributed to 70% of the company's total revenue growth. Increased doctor visits and prescriptions, thanks to higher vaccination rates, drove this segment's revenue 13.8% higher year over year.

Given that J&J's largest segment is also its most profitable one, investors should feel comfortable with its ability to grow as well as add value by returning profits in the form of dividends.

So, Johnson & Johnson appears positioned for solid growth this year, like most other years in its corporate history. But is the company financially strong enough to withstand a downturn in its business?

Well, Johnson & Johnson is the only stock with a flawless AAA credit rating, aside from Microsoft (MSFT 0.88%).

A wonderful stock at a fair price

Johnson & Johnson has raised its dividend for 59 consecutive years, which puts it in the company of just 30 other stocks that have raised their dividends at least 50 years and are known as Dividend Kings.

While investors wait for the market to award Johnson & Johnson with a higher valuation multiple, they can collect a safe, market-beating 2.6% dividend yield.

This Could Cost Johnson & Johnson Billions in Profit

1 Resilient Blue Chip Stock to Buy on the Dip
415%