This mobile device mogul and healthcare hero can help your portfolio weather the stock market's storms.

There are different approaches to how investors put together their portfolios. Some might opt for high-growth stocks, and others might go heavy on dividends. Successful portfolios typically have a good mix of both.

If you're looking to round out your holdings with two choices that can support a strong portfolio, Apple (AAPL 0.90%) and Johnson & Johnson (JNJ 0.88%) are buy-and-hold picks. 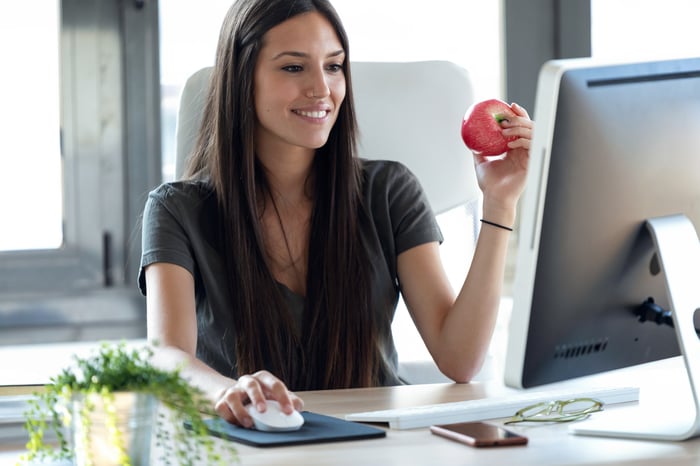 When you're at the market, do some Apple picking

Whoever said money doesn't grow on trees never owned a share of Apple stock. This company has been a solid investment, especially since the release of its first iPhone on June 29, 2007.

You might have heard something similar to this before, but if you had invested $1,000 at the split-adjusted closing price of $4.95 per share on the day the first iPhone launched and held on to it, that investment would be worth $28,600 today. That doesn't include any dividend payouts from the company and reinvestment of those dividends.

Apple has been paying dividends on its stock dating back to 1987, with consistent annual payouts since 2012. The current annual dividend has a yield of 0.59%, although that rate lags behind the S&P 500 average of 1.3%. For that reason, it's not likely that investors look toward Apple for its dividend alone.

Even so, it can make for a smart portfolio addition for those investors (perhaps retirees) who are looking for quarterly income. And for those who choose to reinvest dividends, that strategy could turn into even more of a return because it results in purchasing more shares, which in turn can produce more gains in future dividends as they compound year over year. And more shares in the stock can lead to larger gains when you consider the potential growth based on its historical growth.

What might also make Apple intriguing to dividend investors is the stock price growth, splits, and growing markets in which it is seen as a leader. These include mobile devices, the Internet of Things, 5G, and potentially electric vehicles.

For those who might think they have already missed out on Apple's heyday, it would be wise to reconsider. The company launched the iPhone 13 in September, and early signs from consumer pre-orders in China for the device are ahead of the pre-orders from last year for the iPhone 12 by 25%, jumping by a half-million units. Based on the tracking of delivery estimates, Katy Huberty of Morgan Stanley noted that pre-orders are "off to a promising start" with "strong early demand." We should gain a better sense of how strong a start when the company reports its fiscal 2021 fourth-quarter earnings on Oct. 28.

Throw in growing speculation that Apple is in the midst of developing its own car to compete in the autonomous and EV market, and it makes for an intriguing entry point to buy the stock. In the meantime, the whispered number for fourth-quarter earnings is $1.35 per share compared to the market consensus of $1.23, suggesting the possibility of a 9.7% beat on earnings.

If you're late to the party with regards to Apple stock, it won't make you any money thinking about what could've been. But there is money to be made in what might be.

Johnson & Johnson's products have been in medicine cabinets of homes and doctors offices for over 100 years, since its first sterile surgical supplies in 1886 and a first-aid manual in 1888. More recently, Johnson & Johnson has made the news for its COVID-19 vaccine that was developed by subsidiary, Janssen.

The stock price has experienced dramatic movement since its COVID-induced decline in March 2020 to $105 per share from a previous high of $152. From that bottom, it climbed to a peak just shy of $180 before succumbing to a combination of broader market pressures and a sell-off in pharmaceutical stocks in September, resulting in a current price around $157.

This kind of stock can round out a portfolio to provide consistent income for retirees, who might have a few bills to pay in their post-working years. It can also be a source of compounding for someone who chooses to reinvest the dividends, resulting in additional share purchases -- leading to even more gains. A $10,000 investment would return about $67 in quarterly income based on approximately 64 shares purchased at $157 per share and a $1.06 quarterly dividend payout. On the other hand, a reinvestment of those dividends could result in an extra 1.7 shares per year at the current price and dividend payout.

Building a solid portfolio foundation starts with the inclusion of stocks that have a history of success, a solid core business, and a proven ability to generate returns for investors. Apple and Johnson & Johnson both display these characteristics.

Apple's growth rate since the launch of the iPhone has been tremendous, and arguably is one of the best investment opportunities in the past 20 years. Johnson & Johnson's historical increases in dividends provide the income consistency that bodes well for retirees and those looking to reinvest dividends. Combining these two forces makes for a great start toward a diversified portfolio with the foundation that can withstand market volatility and provide the potential for gains  in the future.