GAAP vs. Non-GAAP: Everything You Need to Know

Many companies report non-GAAP net income to get investors excited. How does it differ from GAAP income and how should you analyze it?

What is the difference between the two? Let's go over GAAP vs. non-GAAP and what you should do if a company reports both.

GAAP accounting standards are created and administered by the Financial Accounting Standards Board (FASB) and governed by the U.S. Securities and Exchange Commission (SEC). The purpose of GAAP standards is to create a uniform way of measuring a company's financial health. GAAP principles dictate:

Although we'll focus on public companies in this article, private companies that have audited financials also use GAAP.

GAAP is very useful for investors and auditors. These standards make it so you don't need to learn a totally new system of accounting and presentation for each individual company. While there will certainly be differences from industry to industry, you can expect the financial statements of similar companies to look and feel similar.

There are limitations, though. In some instances, GAAP reporting doesn't give investors a true picture of the current standing or long-term prospects of a company. When that happens, the company can also choose to report non-GAAP results.

While GAAP accounting covers the entirety of the accounting process from paying an invoice to creating financial statements, non-GAAP accounting is an adjustment to already existing numbers. You probably don't have to worry that a company using non-GAAP accounting has a totally different set of books to produce its non-GAAP net income. You should be able to reconcile the company's GAAP and non-GAAP figures pretty easily.

While the FASB created and makes changes to GAAP, there's no direct creator of non-GAAP standards. However, non-GAAP financials are still governed by the SEC. In fact, the SEC has taken action in the past against companies that it believes are being too aggressive with non-GAAP numbers.

That said, don't rely on the SEC to do due diligence on non-GAAP for you. Be vigilant in your analysis and move on if a company is being too aggressive -- even if the SEC hasn't done anything about it.

One of the most common forms of non-GAAP measurements in accounting is EBITDA, or earnings before interest, taxes, depreciation, and amortization. EBIDTA is reported by most companies in press releases and financial statements. This isn't a true GAAP number for income, but it makes it a little easier to compare income from year to year and company to company.

When you use EBITDA, you don't have to worry about whether a company took on more debt that's reducing income with interest expense. You don't have to adjust depreciation because capital expenditures are materially higher. It's an easy back-of-the-envelope calculation.

Of course, many non-GAAP (also called pro forma) reports of income aren't this easy. Companies will make all sorts of changes to net income to look better.

They'll add back depreciation because it is non-cash. They'll add back restructuring charges and say they're a one-time thing. Insurance companies will add back catastrophic losses if they think the losses aren't likely to recur. Some companies will even adjust the reported numbers of a recently acquired business to subtract out expenses it believes will be reduced with "synergy."

As an investor, all of this makes it hard to trust non-GAAP numbers, and there's a long history of companies using non-GAAP to mislead investors. As long as the company reports GAAP financials as well, it can say anything it wants (as long as it isn't untrue, of course) with non-GAAP numbers.

For example, one-time costs suddenly become recurring costs. Synergies that were expected don't happen. And non-cash expenses exist in GAAP for a reason.

Why do companies use non-GAAP?

There are companies that use non-GAAP legitimately. They really do have one-time expenses or they have a business model that doesn't lend itself to GAAP reporting. Let's use an example to talk about why a company would stray from GAAP.

In its Q4 2020 earnings report, United Parcel Service (NYSE:UPS) reported adjusted earnings per share (EPS) of $2.66 per share. That is a non-GAAP number; the actual EPS was ($3.75) per share. Take a look at the chart in the company's earnings report showing the difference: 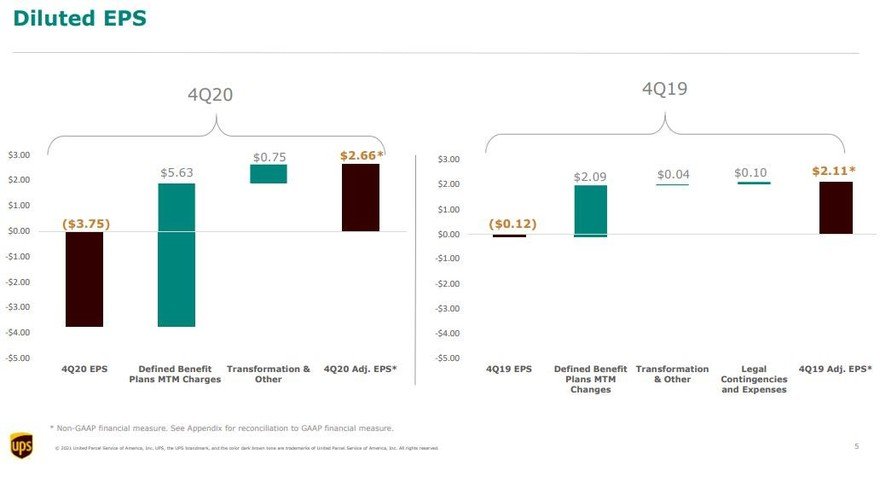 That's quite a difference (more than $6 billion), and you can see that UPS isn't a stranger to adjustments since it also reported much higher non-GAAP EPS in 2019.

What's the story here? For UPS, the main addback in both years is charges GAAP required it to take to net income for shortages in its pension plan. The charges are so high that the company did a separate presentation on them after reporting its earnings.

The gist of the charge is that UPS did not estimate the demographics of its employees well and used too high of a discount rate when it calculated how much it needed in its pension plan to meet its obligations. It missed the mark by quite a bit and had to take a total of $7.72 billion in charges in 2019 and 2020.

The good news for investors is that the company has stopped doing new pensions for non-union employees and will no longer do pensions for any employees after Jan. 1, 2023. Like most businesses did decades ago, it will switch to a defined contribution plan.

It's obvious why UPS chooses to report non-GAAP (remember the company just calls it adjusted) EPS. Pension charges are part of doing business, but with the changes UPS has made to the program, management doesn't think these charges will recur. This is where you come in as an investor.

How to Calculate Cost Basis for Inherited Stock

When you inherit stock, the tax laws can give you a break. Here's how to take advantage of it.

Looking to measure a company's cash flow and operating performance? Look to EBITDA.

How should investors handle non-GAAP?

No one ever said learning how to invest was easy. It seems perfectly reasonable as an investor to believe management's claim that these pension charges are a one-time deal and don't reflect the reality of UPS's business.

But what happens if the stock market crashes? Or what if ex-UPS employees live even longer and UPS has to do even more charges? Remember, even if it is a one-time expense, it is a legitimate expense.

The first thing you need to do is reconcile the numbers. Make sure you understand exactly how the company is adjusting its GAAP net income and why. If you don't understand how the numbers are calculated or can't get it to add up, you may want to pass.

Once you understand the numbers and management's case for using them, decide whether you agree with the case. And, even if you do, consider what the future holds if it turns out management is being overly optimistic.