Hydrogen stocks made big moves Thursday as investors bid the clean energy stocks higher after big news from the industry hit the headlines even as President Joe Biden presented a watered-down infrastructure bill at Capitol Hill. As of 2:20 p.m. EDT, shares of Plug Power (PLUG 3.19%), Bloom Energy (BE 0.93%), Clean Energy Fuels (CLNE -0.18%) were trading up 11.6%, 8.3%, and 8.5%, respectively.

Aviation firm ZeroAvia just announced that it's developing a 19-seater aircraft that'll fly "entirely on hydrogen," with the first such commercial passenger flight expected to fly between the U.K. and Netherlands by 2024.

ZeroAvia said it had partnered with Royal Schiphol Group, Rotterdam The Hague Innovation Airport Foundation, and the airport itself for the project, and that it was already in advanced talks with airlines to find an operator for the planned route between Rotterdam The Hague Airport and London.

The announcement came just one day after ZeroAvia said it had collaborated with Alaska Air Group to develop a hydrogen electric powertrain for a 76-seat passenger plane with a 500-mile range. 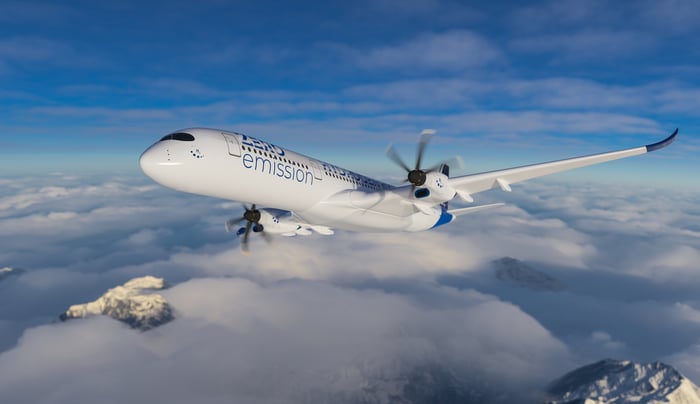 Although ZeroAvia already flew a hydrogen fuel-cell test flight last year, the prospects of hydrogen-powered commercial planes flying in just about three years reflects the exponential potential in the green hydrogen industry. Aviation, by far, is one of the most difficult industries within the transportation sector to decarbonize, with some leading airlines even believing a sustainable fuel that could potentially replace jet fuel may not see the light of the day until the end of this decade.

Investors in stocks that are into hydrogen and fuel-cell technologies saw today's news as a big signal to pull the trigger, especially in stocks that have already been in the spotlight lately.

Bloom Energy shares, for example, blasted higher earlier this week after the company announced a deal with South Korea's SK Group's affiliate, SK ecoplant, to sell fuel cells that could generate revenue worth a whopping $4.5 billion between 2022 and 2025. With fuel-cell hydrogen servers that provide uninterrupted power supply, Bloom Energy's products have among the widest potential reach in the hydrogen market.

Plug Power is also emerging as a key player in the industry, with its recent moves visibly reflecting the company's efforts to expand beyond the forklift market. For example, Plug Power has signed multiple deals in recent weeks with companies from different parts of the world -- including one yesterday in Europe. Notably, most of the deals revolve around the advancement of hydrogen technology into the transportation sector, which might also explain the big move in Plug Power shares today.

Clean Energy Fuels, on the other hand, is entirely into making renewable transportation fuels, specifically renewable natural gas. But just earlier in October, the company bagged its first contract to supply hydrogen fuel and build a hydrogen station for a bus service company in Southern California. It's no surprise, then, that Clean Energy Fuels shares also jumped higher alongside hydrogen stocks on Thursday.

On Thursday, Biden also presented a $1.75 trillion infrastructure bill with focus on child care, healthcare, and clean energy, among other things. He proposed to spend more than $500 billion on clean energy initiatives, and although there's nothing more to it now than just a proposal, investors in clean energy were excited nonetheless as it put to rest speculation about Biden potentially dropping his clean energy proposals altogether to win votes to pass an infrastructure bill.

With hopes on a bill renewed even as interest in alternatives fuels like hydrogen visibly accelerating, investors wasted no time betting money on hydrogen stocks.