Please ensure Javascript is enabled for purposes of website accessibility
Log In Help Join The Motley Fool
Free Article
Join Nearly 1 Million Premium Members And Get More In-Depth Stock Guidance and Research
By Will Healy – Oct 28, 2021 at 10:06AM

PayPal faces some competitive threats, but there is a path to reaching this coveted milestone by the end of the decade.

The rise of PayPal (PYPL 5.68%) since its spinoff from eBay has rapidly turned the online payments giant into a mega-cap stock valued at almost $300 billion. Given that increase and the rising number of tech stocks that have achieved a $1 trillion market cap, it may leave investors wondering when a fintech stock such as PayPal can reach that point. Let's take a closer look at the business and its financials to evaluate whether PayPal can achieve that milestone by 2030.

PayPal played a significant role in pioneering the fintech industry in the 1990s, making digital payments possible. The expanding fintech environment and a long period as a subsidiary of eBay have not stopped PayPal from becoming an industry leader. Since its 2015 spinoff, the stock has risen by nearly 600%. As a result, some analysts think that smart investors should buy it hand over fist. 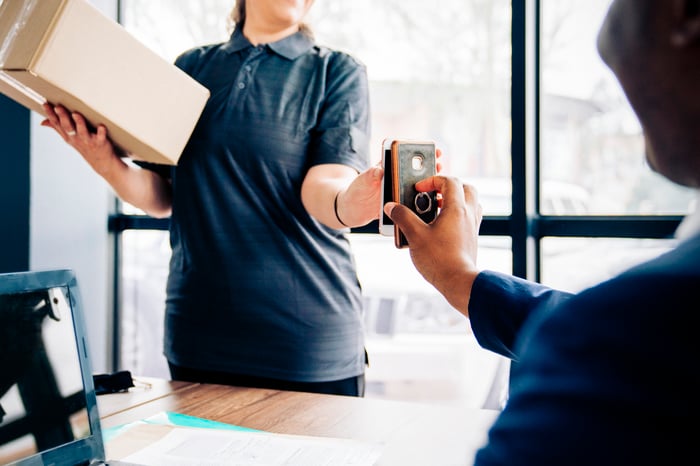 Its role in a rapidly growing industry may reinforce that positive sentiment. Grand View Research forecasts a compound annual growth rate (CAGR) for the global digital payment market of 19% through 2028. If that prediction holds, it will become a $236 billion industry over that time. Thanks to a presence in over 200 countries and its support of 25 currencies, PayPal likely stands in one of the best positions to capitalize on this growth.

PayPal generates most of its revenue from transactions on its more than 400 million active accounts. Moreover, its varied product offerings outside its flagship PayPal brand, such as Hyperwallet, Braintree, Xoom, and Zettle, help facilitate such transactions.

It has also gained particular attention through Venmo, PayPal's peer-to-peer payments platform. Venmo allows users to send and receive cash via a smartphone app. In the latest quarter, Venmo payment volume increased 58% year over year, faster than the 40% reported for the overall company.

Nonetheless, overall revenue growth remains robust. In the first six months of 2021, PayPal brought in about $12.3 billion, a 24% increase compared with the first half of 2020. Over the same time frame, net income surged 41% to $2.3 billion as the company limited operating expense growth to 18% and received a tax benefit in the first quarter.

PayPal expects revenue growth to slow to 20% for the overall 2021 calendar year. Consequently, the rapid stock price growth of past years has given way to stagnation. PayPal's stock has fallen about 20% from its July high, and it has risen by only about 6% since the beginning of the year.

Still, 20% revenue growth represents robust expansion. Also, at a P/E ratio of just over 60, it remains much cheaper than archrival Square (SQ 5.71%), which sells for about 230 times earnings.

Nonetheless, PayPal operates at a competitive disadvantage to Square with regard to serving businesses. Businesses can handle virtually all financial functions within Square's ecosystem, ranging from cash management to payroll to more recently, traditional banking. Though PayPal also offers many of these services, its users still must partner with outside banks.

Since Square fully operates in only seven countries, PayPal holds a significant advantage in terms of addressable markets. Unfortunately for PayPal, its worldwide presence has less meaning in countries where debit and credit cards are less common. Thus, millions of customers in developing countries will likely turn to a fintech such as MercadoLibre or Sea Limited, whose products connect cash customers to the digital payment environment.

Despite these limitations, PayPal could reach a $1 trillion market cap by 2030. At PayPal's current valuation, the stock has to double less than two times for the market cap to reach $1 trillion, an achievable goal when revenue growth is consistently rising at double-digit percentages.

Admittedly, Square remains an ongoing threat, and it will probably have to expand product offerings to serve more customers in the developing world. Still, with PayPal capitalizing on its industry's 19% forecasted CAGR, its market cap can reach that $1 trillion milestone by the end of the decade -- or sooner.