These two stocks helped the market finish strongly for the month.

October might be a scary month, but Wall Street got nothing but treats in what turned out to be an extremely strong period for the stock market. The Nasdaq Composite (^IXIC) joined the S&P 500 (^GSPC 1.46%) and Dow Jones Industrial Average (^DJI) at record highs, clawing back from losses early in the day to post modest gains to finish the week.

Many of the same names have been at the top of stock leaderboards for a long time now, and you'll see several of them pushing higher today. Yet interestingly, some names that haven't really come to the forefront managed to post huge gains on Friday. Below, we'll highlight Live Oak Bancshares (LOB 4.74%) and A10 Networks (ATEN 2.31%) to see why they were able to put up truly monstrous advances to the benefit of their shareholders.

Live Oak grows to the top of the forest

Shares of Live Oak Bancshares jumped almost 15% on Friday. That took the bank stock to an all-time record, and the share price is now almost 10 times what it was just over a year and a half ago.

Professional stock analysts were largely responsible for the positive move from Live Oak on Friday. J.P. Morgan upgraded shares of Live Oak from neutral to overweight, pointing to the success that the bank has had in boosting its loan origination volume to a much greater extent than its peers. 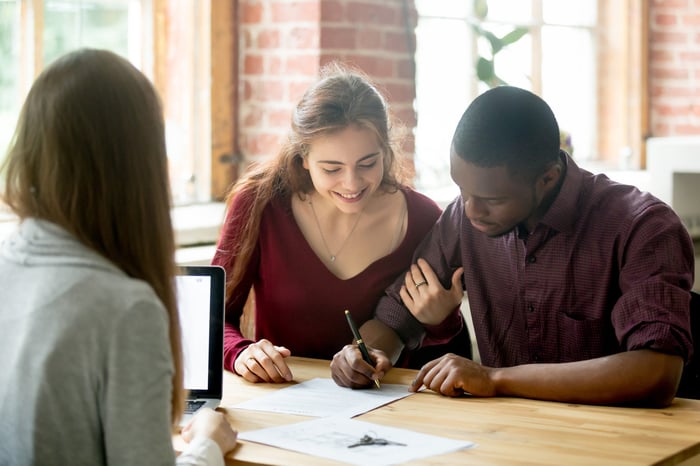 The upgrade came after Live Oak's third-quarter earnings report on Thursday morning, which proved to be the first stage of a massive two-day rally. Live Oak's numbers included a 44% jump in net interest income, as well as a 10% rise in loan and lease originations and 19% deposit growth. Earnings were slightly weaker than in the year-earlier period, but that largely reflected the massive gains that Live Oak saw last year as a result of its dominating position in providing loans under the federal Paycheck Protection Program.

Many investors see the financial industry as a quiet backwater of the stock market. Yet Live Oak has carved out a lucrative niche for itself, and the company has been able to sustain its success far longer than skeptics had originally anticipated.

An A-1 performance from A10

Meanwhile, A10 Networks saw its stock jump 35%. The secure application services provider reported favorable results in its third-quarter financial report, giving shareholders more comfort that the company will be able to take full advantage of favorable trends in the technology sector.

A10's results weren't groundbreaking, but they showed solid growth. Revenue was up 15% year over year, and adjusted net income managed to pick up nearly 34% from year-ago levels. Sales of its security products climbed 18%, and A10 pointed to strong execution in its Americas segment, where growth came in at 47%.

One core reason behind A10's renaissance is that it strategically decided to pursue cybersecurity services more aggressively. That move has paid off for the company so far, and A10 CEO Dhrupad Trivedi said that market share figures are improving and are likely to continue to improve for the rest of the year and beyond.

There's plenty of room for success in tech services, but A10 has largely gone unnoticed until now. That's likely to change, and with the stock at all-time highs finally getting above where it traded shortly after its 2014 IPO, A10 could have momentum for quite a while longer.

Here's What You Can Do That Warren Buffett Can't
395%