These oil stocks are cashing in on rising crude oil prices.

Oil prices have skyrocketed this year. WTI, the primary U.S. oil benchmark price, is up roughly 75% in 2021, recently closing at around $83 a barrel. Oil market watchers believe crude prices could have further to run as the economy picks up speed at a time that major producers are still holding back supply.

With crude oil nearing $100 a barrel, we asked some of our energy contributors for their favorite oil stock play. Here's why they think ConocoPhillips (COP -2.87%), Devon Energy (DVN -0.16%), and EOG Resources (EOG -0.10%) are in the best position to cash in as crude oil prices approach $100 a barrel. 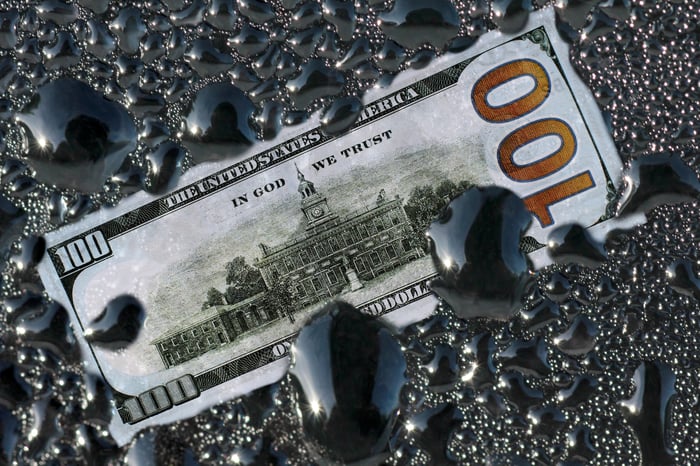 Using the downturn to get better

Reuben Gregg Brewer (ConocoPhillips): Roughly a decade ago, ConocoPhillips spun off its downstream refining operations so it could focus on its exploration and production operations. In 2016, during an energy industry downturn, it cut its dividend. But that reset appears to have positioned the driller well, because it was actually able to increase its dividend right through the 2020 pandemic-driven oil downturn.

But even better, it was able to use the downturn to opportunistically acquire assets, including buying Concho Resources and Permian Basin assets from Royal Dutch Shell. These moves position it to be a better company now than it was before the downturn. Notably, the oil driller expects to be able to grow production, on average, at roughly 3% a year for the next decade and generate $80 billion in cash flow over the span. Further, it believes it will be able to achieve a return on capital employed rate of 20%, up from 17% before the recent acquisitions. These are all strong numbers.

The upshot here is that ConocoPhillips is now positioned to benefit even more from rising prices. To be sure, if oil falls the company will feel the hit more than a diversified integrated oil major. However, if you have a strong conviction that oil prices are heading toward $100 a barrel, this focused exploration and production name should be on your short list. You'll also be able to collect a 2.4% dividend yield along the way, though that's probably not by itself a sufficient reason for buying ConocoPhillips.

As oil prices rise, so should this stock's dividends

Neha Chamaria (Devon Energy): Investors in some oil stocks haven't had it this good in years. Not only are some of the larger oil producers minting a lot of money from higher oil prices but they're also returning large chunks of it to shareholders in the form of big, fat dividends. That means if an oil stock has pegged its dividends to oil prices, you could pocket a lot more money if oil prices shoot to $100 per barrel. That's exactly what investors in Devon Energy can expect to see, thanks to the company's new fixed-and-variable hybrid dividend policy instituted earlier this year.

Under its new policy, Devon's quarterly dividend has two components: a fixed payout of $0.11 per share, and a variable dividend of up to 50% its incremental cash flows (or simply 50% of any cash flows left after funding its capital expenditures and fixed dividend and factoring in any one-time charges like restructuring).

Devon already gave a glimpse of what to expect last quarter when it declared a quarterly dividend of $0.49 per share, comprising of a fixed dividend of $0.11 a share and a variable dividend of $0.38 per share as the company's free cash flows jumped nearly sixfold sequentially.

As rising oil prices should mean higher cash flows for Devon, you can bank on bigger quarterly dividends from the 1%-yielding stock. Here's the best part: Devon has a history of regularly increasing its dividend over the years, growing it at a compound annual rate of around 10% since 1993. With a solid balance sheet to boot, Devon Energy is one heck of an oil dividend stock to play the rally in oil prices.

Positioned to cash in on higher oil prices

Matt DiLallo (EOG Resources): EOG Resources has one of the lowest-cost oil businesses in the U.S. The company can generate enough cash flow to maintain its current production rate as long as WTI averages $30 a barrel. Meanwhile, it only needs WTI at $36 a barrel to cover its 1.8%-yielding dividend. Because of that, it's producing a gusher of excess cash flow at the current $80+ WTI price.

EOG generated $2.1 billion of free cash flow during the first half of the year after covering its base capital program. That gave it the funds to pay its regular dividend, a $600 million special dividend, repay a $750 million bond maturity, and invest $500 million in additional capital projects. Meanwhile, it ended that period with $3.9 billion of cash on its balance sheet.

EOG estimated it could produce an additional $2.3 billion of free cash during the second half of the year if oil averaged $65 a barrel. With crude well above that level, EOG is on track to significantly exceed that number.

The company plans to prioritize returning its growing cash flow gusher to shareholders. It could do that by paying additional special dividends and opportunistically repurchasing shares.

EOG's low-cost oil business has it swimming in cash as crude oil prices approach $100. Instead of using that money to drill more wells, which would increase supply and potentially impact oil prices, it intends on returning most of that growing gusher to investors. That makes it stand out as a top option for investors seeking a way to cash in on rapidly rising crude oil prices.