Thanks to the ongoing innovation revolutions in both the tech and healthcare sectors, shareholders have been enjoying historic returns on capital over the past decade. For example, the central nervous system disorder drug specialist Axsome Therapeutics, the cancer specialist Exelixis, and the electric car pioneer Tesla have all delivered tenfold returns for investors who bought these names at their low points.

Which stocks might be the next Axsome, Exelixis, or Tesla from a growth standpoint? The cancer/rare disease specialist Mereo BioPharma Group (NASDAQ:MREO) and the diabetes-focused medical device company Senseonics Holdings (NYSEMKT:SENS) could both be gearing up for a monstrous run higher soon. In fact, these two low-priced healthcare stocks have a decent shot at generating 1,000%-plus returns for their shareholders within the next two to three years.

Here's a brief overview on the risks and potential rewards associated with each of these promising growth vehicles. 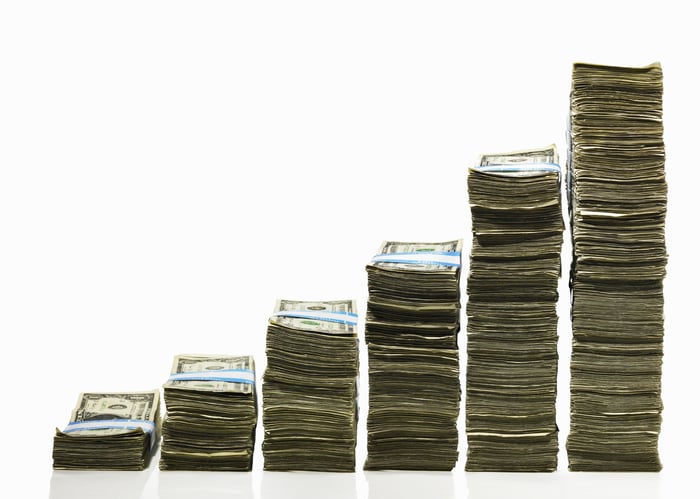 Mereo BioPharma: A bet on the future of immunotherapy

The London-based biopharma Mereo hasn't exactly set the world on fire since its American depository shares (ADS) made their debut on the Nasdaq stock exchange. Keeping with this theme, the biotech's ADSes have lost approximately 65% of their value since April 2019. This steady downward trend shouldn't scare away aggressive investors, however. Mereo's plunging share price, after all, is more about Mr. Market's well-known impatience with clinical-stage biotechs, rather than the company's underlying value proposition.

What's the scoop? Mereo is a small-cap company with six assets under development for both cancer and rare diseases. However, the one drug candidate that could undoubtedly send the company's shares rocketing higher is the anti-TIGIT therapy known as etigilimab. Several major drug companies, such as BeiGene, Bristol Myers Squibb, Merck, and Roche, have anti-TIGIT therapies under development due to their potential to boost the efficacy and durability of cancer immunotherapy treatments in general. Mereo's etigilimab is currently in a combined phase 1/2 basket study to evaluate its utility as part of combination treament, along with Bristol's megablockbuster checkpoint inhibitor Opdivo, for a variety of solid tumors.

As things stand now, Mereo's anti-TIGIT candidate is slated to yield top-line data from this basket trial in approximately 18-months from now. During this lengthy interval, however, the drugmaker ought to provide multiple updates on etigilimab's progress, which could turn out to be a series of major catalysts for its share price in the coming months. Another bit of good news is that Mereo's cash runway reportedly extends into 2024. That's key, because it means that the biotech shouldn't have to repeatly tap the public markets for capital over the next year and a half.

What's the downside risk? Mereo's management team has been open about its desire to partner with larger biopharmas. Etigilimab, for its part, could spark either a high dollar licensing agreement or a full-on buyout within the next two years. So a lot is riding on this single experimental drug. Unfortunately, early stage cancer therapies fail more often than not in the clinic. As a failure in this case would weigh heavily on the biotech's share price, potential investors may want to keep any initial position on the small side.

Senseonics' stock is worth a look by ultra-aggressive investors due to its implantable continuous glucose monitoring (CGM) device franchise known as Eversense. The lowdown is that the CGM market has been growing by over 10% per year over the past five years, according to a report by Grand View Research. What's more, this space is forecast to grow by at least 10% per year over the next five years. That's definitely a favorable trend for a small-cap CGM player like Senseonics.

So far, Senseonics has only captured a small sliver of this multi-billion dollar medical device market with its Eversense franchise. But the company is hoping to drastically improve its competitive positioning with a potential regulatory approval by the Food and Drug Administration (FDA) for its 180-day version of the Eversense CGM system. The medical device company submitted a regulatory application to the FDA for this proposed product over a year ago. So a decision could come any day now.

Why does this FDA approval matter? Senseonics' internal projections have the company's top-line rising at a compound annual growth rate of over 70% over the next five years as a result of this key regulatory nod. The long and short of it is that the current 90-day Eversense CGM system isn't particularly competitive in the U.S. against the market-leading devices from DexCom and Abbott Laboratories, respectively. But this longer-lasting version of the device could cause sales to skyrocket in the coming years.

What's the risk? Senseonics is competing in a jam-packed space against a number of well-capitalized medical-device giants. So there is a chance that this long-awaited FDA approval won't spark a parabolic rise in sales. That's not a knock against Senseonics' CGM system, but rather the harsh reality of competing against healthcare companies with vastly superior resources. Investors shouldn't ignore this potential risk factor.

All told, Senseonics could be on the verge of a game-changing regulatory event that might prove to be a key inflection point for the company's CGM franchise. If true, this medical device company's stock should turn out to be a downright bargain at these levels.