This streamlined producer is poised to capitalize on rising prices.

As the nation's largest oil company, ExxonMobil (XOM 0.69%) has been plagued by low commodities prices in a shale-oil boom, evaporating demand in a pandemic, and fraud allegations in a mounting global climate crisis. Additionally, fears abound that the value of oil reserves may take a hit as the world increasingly demands a net-zero carbon energy supply. ExxonMobil has recently overcome many of these issues with a mix of strong financial and operational discipline, and it has benefited from a sharp rebound in commodities prices. But investors looking to buy energy stocks might still wonder whether ExxonMobil's recent good fortunes will continue. 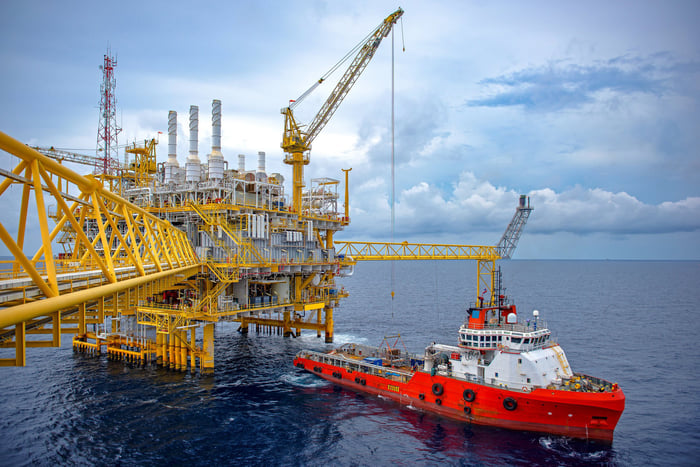 From bust to boom

The world is recovering from a pandemic that brought on an unprecedented collapse in oil demand. Last year, oil fell through the bottom, with some contracts trading for negative prices on the futures market. It now tops more than $80 a barrel because oil demand has surged faster than production can recover as the global economy emerges from pandemic-era restrictions. That rebound helps to explain why ExxonMobil shares have rallied about 56% this year, compared to about 23% for the S&P 500.

So what's ahead? The industry may never return to what was once considered "normal," according to the International Energy Agency. But so far, fears of a permanent decline in oil demand have proven unfounded. In fact, the agency still forecasts that oil demand will rise to 104 million barrels a day by 2026, up 4% over the pre-pandemic levels of 2019.

As oil and gas prices retreated several years ago, ExxonMobile started aggressively cutting costs. It laid off workers, cut capital spending, and paid down its debt load. As it slashed its budgets, the company also found improved operating synergies between its integrated upstream, downstream, and chemical divisions. The company has paid down $11 billion in debt this year, reducing its debt-to-capital ratio to 25%. It has also achieved $$4.5 billion in reduced structural costs over 2020 and the three quarters of 2021.

That strategy not only helped ExxonMobil survive an oil bust, but also prepared it for oil's inevitable return. After all, lower production costs plus higher prices equal bigger profits and stronger cash flow. The company posted a $6.7 billion profit for its third quarter, compared to a $680 million loss in the same quarter last year. Revenue was up 60% to nearly $76.8 billion. Cash flow from operations totaled $12.1 billion, enough to fund capital investments, debt reduction, and ExxonMobil's sizable dividend. The company expects that cash flow to continue, which will let it fund $10 billion in share repurchases beginning next year.

What about climate change?

If you're an investor fretting over inaction about climate change, ExxonMobil is not the stock for you, at least on purely philosophical grounds. The company has taken the position that the shift to alternative energy sources will take decades, if not 100 years, and that oil and gas will continue to power the world in the meantime. It touts carbon capture and low-emissions fuel initiatives, but it has not substantially changed its focus on fossil-fuel production.

This has made it one of the largest targets for activists. Last week, CEO Darren Woods appeared before Congress to address allegations that it, along with some of its rivals, spread disinformation about climate change in much the same way that Big Tobacco lied about the hazards of its products. He denied these claims, and in 2019, ExxonMobil won a lawsuit filed by the state of New York that made the same allegations.

These sorts of complaints are not likely to go away, but so far ExxonMobil appears to be dodging the bullets and thriving in spite of them. Climate change and its attendant need to abandon fossil fuels do not appear to be hurting Exxon's stock price in a world that remains thirsty for oil.

The oil business is competitive and ExxonMobil has a narrow economic motive, yielding plenty of room for its competitors. But in terms of stock appreciation, it has outperformed the nation's No. 2 oil company, Chevron (CVX 0.26%), which is up a market-beating 35% year-to-date, benefiting from some of the same moves and trends as ExxonMobil. ExxonMobil is also paying a higher dividend than Chevron, nearly 5.5% versus Chevron's nearly 4.75%.

But can the oil business, and in particular, ExxonMobil, keep going? ExxonMobil stock is trading near its 52-week high, but it is still well below the $100-plus level it achieved in 2014. Oil is now trading for more than $80 a barrel, but there's no reason it can't go well over $100, as it has in the past, given current trends. Like ExxonMobil, most oil companies scaled back production when prices collapsed, and bringing it back up to meet a new surge in demand can take years.

A bet on oil is to some extent a bet on inflation, which recently hit a 30-year high.It's also a bet on continued supply chain disruptions, which can constrain oil inventories.

A sharp recession, or a new spike in the pandemic, could reverse the current trend of rising oil demand and push the industry back into its doldrums. It is, after all, a cyclical industry. But right now it appears the cycle is on a sharp upswing, and ExxonMobil has wisely used its downtime to position itself for success in this moment.