ExxonMobil (XOM -0.85%) stock has generated steady dividend income for millions of investors over the years, so it isn't surprising that it still has many fans, despite its lackluster share price performance. Over the last 10 years, ExxonMobil stock has generated a total return of 11.6%, compared to 372% for the S&P 500 Index. However, the stock largely outperformed the broader market in the 2000-2015 timeframe.

That said, the key question for investors considering the stock now should be how the company will fare in the coming 10 years.

Demand for oil is not going away

The International Energy Agency estimates that the global demand for oil could rise to 104.1 million barrels per day in 2026 from an estimated 96.5 million barrels per day in 2021. It expects market demand to start plateauing from 2030 onwards. Road transport accounted for 60% of oil demand growth in the last decade. But a shift toward greater use of electric vehicles is looming. 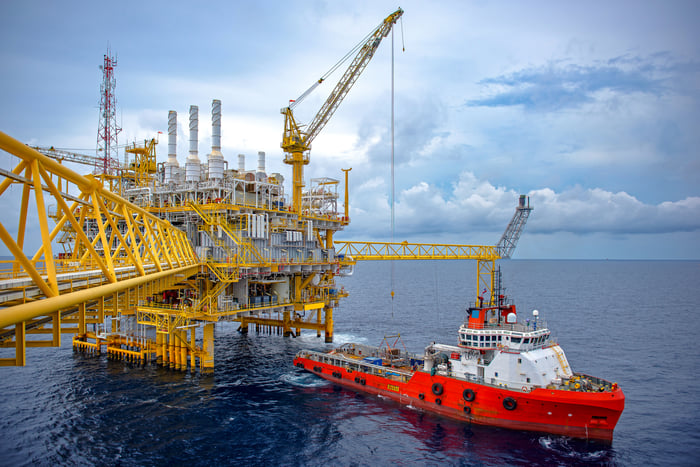 However, the petrochemical industry's need for oil could be robust. The IEA expects that, driven by demand for plastics, petrochemicals will account for 60% of the oil demand growth in the coming decade. The petrochemical sector's appetite for crude should expand along with the global population and economic growth, especially in emerging economies.

Even taking those projections with agrain of salt, it is still fair to assume that it will be a number of years before demand for oil begins to fall, even if it does reach a point sooner where it stops rising much. That should be enough to allow the major oil companies to continue churning out profits for years. ExxonMobil has global operations, with a significant presence in Asia.

Challenges ahead for ExxonMobil

Then there's the bearish part of the argument: ExxonMobil's net income and EBITDA have been on downward trends for the past decade. 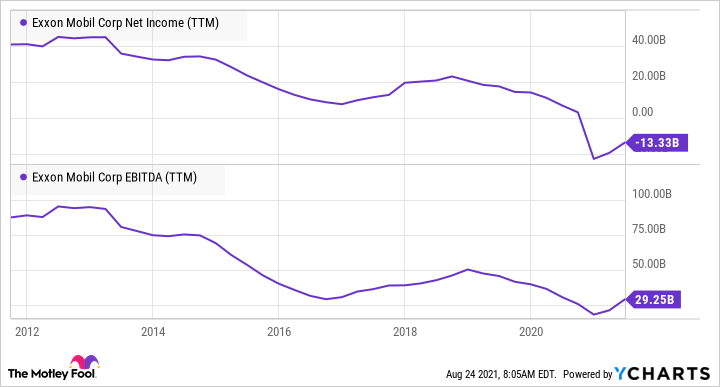 What is even more concerning is that its debt levels have risen, while return on invested capital has gone down. 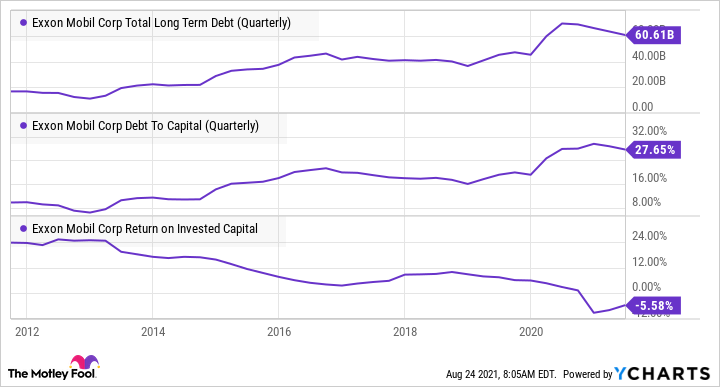 Prices of commodities such as oil and natural gas tend to fluctuate a lot and can remain depressed or elevated for extended periods depending on political or macroeconomic factors. These changes directly impact ExxonMobil's earnings. Illustrating this, in the second quarter, ExxonMobil reported earnings of $4.7 billion compared to a loss of $1.1 billion in the prior-year quarter.

The company has reduced its debt by $7 billion since the end of 2020. Its cost-cutting efforts have saved it $4 billion in structural expenses over the last 18 months. It is on track for total savings of $6 billion through 2023. Moreover, it reduced its annual capital expenditures from more than $24 billion in 2019 to $17 billion in 2020. Management now expects capital expenditures to be near the lower end of its 2021 guidance range of $16 billion to $19 billion. In short, it is moving in the right direction.

ExxonMobil stock may continue to underperform

Yet ExxonMobil may not return to earnings growth at the levels it delivered during the shale boom. This is partly because oil demand growth is expected to decelerate. Even if higher commodity prices and stable demand allow the company to reduce its debt and sustain its dividend payments, its gains on the bottom line would likely be limited. Moreover, the forecast conditions could put downward pressure on prices, and the influences of the Organization of the Petroleum Exporting Countries (OPEC) and its individual members may keep oil prices volatile.

For all of these reasons, ExxonMobil stock could continue to underperform the broader market in the coming decade. Investors should be able to find better dividend and growth opportunities elsewhere.