Please ensure Javascript is enabled for purposes of website accessibility
Log In Help Join The Motley Fool
Free Article Join Over 1 Million Premium Members And Get More In-Depth Stock Guidance and Research
By Reuben Gregg Brewer - Apr 10, 2021 at 8:15AM

What should investors think of energy industry giant ExxonMobil today? The answer is complicated.

There's no question that 2020 was a very difficult year for energy companies, with even the industry's biggest names feeling a severe hit. But the oil market has started to stabilize, and the stocks of companies like ExxonMobil (XOM 1.84%) have recovered some lost ground. Still offering a historically high 6.1% yield, is this integrated energy giant worth buying today? Here are some things to consider before making up your mind.

One of the biggest risks to Exxon's future is the ongoing global shift toward low carbon energy options. The big fear is that oil and natural gas fall out of use so quickly that Exxon is left with energy assets that have little to no value. This isn't an unreasonable concern, but timing matters. 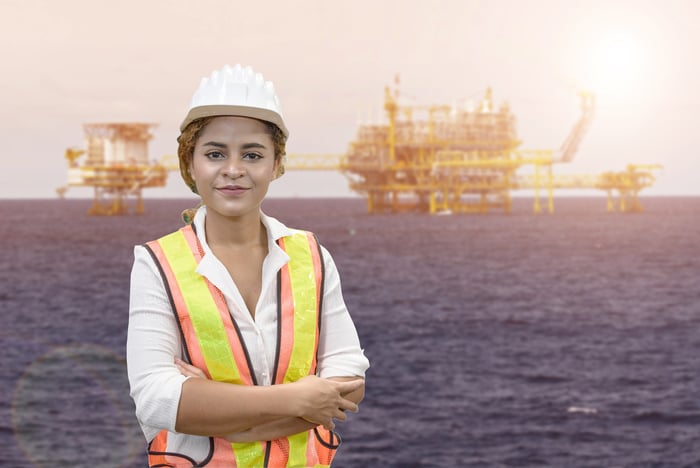 Exxon has pointed out that energy transitions take a very long time, with the shift from coal to oil lasting about 100 years. In other words, while the world is shifting to things like solar and wind power, it could be a very long time before oil and natural gas are out of the picture. And since wells have limited lifespans, depletion suggests that more drilling will be needed for years to come.

This is why Exxon has basically chosen to stick with oil and natural gas and not follow its European peers in building a renewable power business. Exxon's approach isn't one that Wall Street likes today, but while not in line with current world views it isn't outlandish, either. In fact, if you are a contrarian, you might actually like the approach this energy giant is taking.

That said, with a roughly $240 billion market cap Exxon is one of a small number of very, very large integrated energy companies. That makes it something of a target for those looking to upend the industry. For example, New York State recently lost a case in which it was trying to hold Exxon, and a handful of other industry bigwigs, responsible for damages caused by global warming. But that's just one example; there are plenty of others. And even if Exxon were to win every single court case or public relations battle, there's a cost involved in these efforts.

In other words, even if oil is needed for years to come and Exxon is happily there to provide it, the company is still likely to face a lot of public scrutiny. That will likely have a negative impact on Wall Street's view of the stock.

One other problem here is that drilling for oil and natural gas is a capital-intensive process. And since the products Exxon produces are commodities, its top and bottom lines can, and do, vary considerably from year to year. Often the variance is quite significant, noting that it lost $22 billion in 2020 with its $15.7 billion in cash flow from operations less than 50% of the previous year's level. Meanwhile, the company's capital investments, even after cost cuts, came in at around $21 billion. On top of that sum, Exxon paid $14.9 billion in dividends and remains committed to supporting its quarterly payments.

Clearly, it fell short of covering the dividend and capital spending from cash flow, which is why total debt increased by 44% in 2020. Looking back to 2019, the company's total debt has increased by nearly 80%, suggesting that the trend toward higher leverage here was in place before the coronavirus pandemic. To be fair, net debt (which takes cash into consideration) to capital is around 28%, which is hardly unreasonable. But given the need for investment in the industry and the increasing debt pile here, this is an issue that investors need to monitor.

Although already noted, it is important to keep in mind that the core of Exxon's business is built around commodity products. That means it has little control over its top line. And while costs are within the company's control, the business is capital intensive by nature. So Exxon is always on a tightrope, trying to balance revenues and expenses. When oil prices are extremely high that's an easy effort, but when they are low it requires a lot more finesse.

This is a wild card that is hard to predict, since the recent pullback in capital investments throughout the energy sector could lead to higher prices down the line. That would solve a host of ills here, allowing Exxon to pay down debt while still investing for the future and rewarding investors with big dividends. Or, the move toward clean energy could reduce demand and keep prices range bound, which would mean Exxon needs to remain extra careful with its spending and potentially rely even more on its balance sheet for funding. The dividend in that scenario would become increasingly risky.

Exxon is generally considered a well-run oil company, though it is clearly out of step with the clean energy theme that is increasingly important on Wall Street. While it is easy to heap scorn on the company after a disastrous year for the oil industry, Exxon isn't taking an outlandish position about the future -- just one that people don't like. That said, there are very real risks here, given that it is spending more than it brings in from its business and increasingly relying on debt to fund capital spending and dividend payments.

With a hefty 6.2% yield, some contrarian investors might find it attractive, believing that they are getting paid for the extra risk. That's a fair take, but the key is that you have to buy into the company's views on the long-term prospects of the oil industry. If you don't, Exxon is clearly not the right name for you today.