The company's revenue jumped 21.5% year over year to $86.1 million. With the economy reopening after the COVID-19 pandemic-induced shutdowns and travel and movement of goods normalizing, Clean Energy Fuels delivered 104.2 million gallons of fuel in the third quarter, up 6.7% year over year. 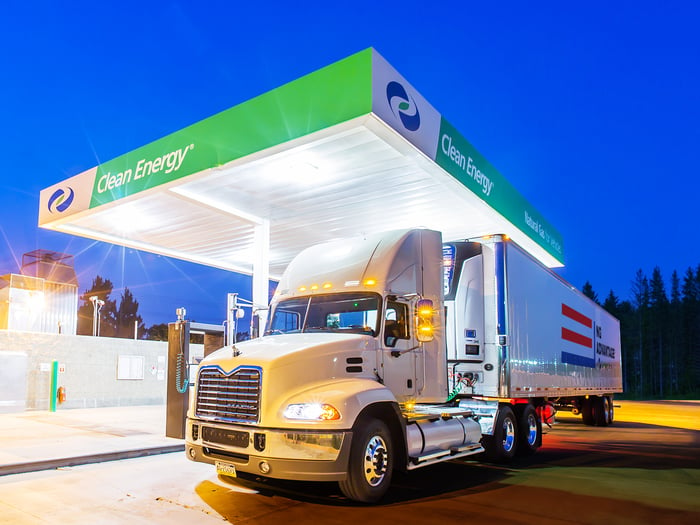 Clean Energy Fuels breaks down organic waste into biogas to produce renewable natural gas (RNG), which it then sells through its stations, primarily to medium- and- heavy-duty commercial vehicles. The company also sells conventional natural gas and realized higher prices in Q3 thanks to the soaring prices of natural gas in recent months.

Yet, Clean Energy Fuels reported a Q3 loss of $3.9 million, or $0.02 per share, according to generally accepted accounting principles (GAAP). Analysts expected the clean energy stock to turn a profit instead, which explains why the stock is tumbling today. Also, the company reiterated its full-year outlook and expects to incur a loss of $86 million.

On a positive note, here are some of the significant things that CEO Andrew Littlefair highlighted:

During its third-quarter earnings conference call, the company further revealed that Amazon trucks had fueled at more than 85 Clean Energy stations across 21 states. More importantly, the company is building more stations to accommodate more of the Amazon fleet by early 2022.

With some of the largest global companies already among its customers, Clean Energy Fuels has proven RNG's viability as an alternative to fossil fuels. Growth potential is huge given that the company's current target market, heavy-duty trucking, is also the largest consumer of fuels within the transportation sector. Moreover, it's expanding into marine and recently bagged its first contract to build a hydrogen fuel station. Hydrogen is another massive market that's getting a lot of attention lately.

So while Clean Energy Fuels will likely regularly be in the news, the stock could have more bad days like today simply because investors want to see the company make money and prove its renewable fuel isn't just viable, but commercially viable.