The company is working to regain an investment grade rating and its benefits.

After taking on billions in debt to weather the 2020 economic storms of COVID-19, Ford (F -0.68%) announced on Nov. 4 that it's freeing itself from approximately $5 billion worth of junk bonds through an upcoming buyback. The bonds helped save Ford's bacon when the U.S. government enforced shutdowns last year, but those bonds also pushed it below investment-grade rating.

Now, the company aims to win back that rating -- a step potentially helpful in supporting its aggressive electric vehicle (EV) expansion, and likely bullish for investors much sooner. Let's take a closer look at what's happening.

Striking off the junk bond shackles

Early last year, when the coronavirus arrived on America's shores and lockdowns began crushing the economy, Ford issued $8 billion in bonds, giving itself a substantial cash reserve to survive the crisis. The bond issue served its purpose in this way, but it also caused corporate credit rating agency Standard & Poor's (S&P) to cut Ford's rating to BB+, a "speculative grade" rating rather than "investment grade." 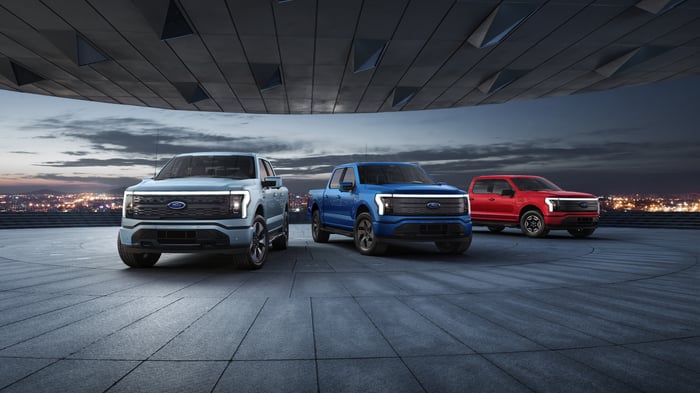 Fitch Ratings, the third agency, also downgraded the Blue Oval to BB+ in May, specifically noting that the $8 billion bond issue "will leave the company with higher leverage over the longer term, along with a substantial maturity wall in 2023 when the first $3.5 billion [...] comes due." With all three main rating agencies cutting Ford's rating to "speculative" (or, colloquially, "junk"), obtaining additional credit became more difficult and more expensive. Additionally, large institutional investors such as mutual funds, insurance companies, hedge funds, and so on, are typically barred from investing in junk rated companies.

The automotive giant already had a checkered rating history, spending seven years with a junk rating between 2005 and 2012. Its latest move, however, is likely a crucial step in putting the past behind it, adding strength to its Ford+ turnaround strategy and initiatives.

Ford, which currently has $31 billion in cash available, is spending up to $5 billion of that repurchasing junk bonds with yields between 6.375% and 9.98%, according to its press release. Speaking to reporters on Nov. 4, the Blue Oval's treasurer David Webb said that "it's the time to aggressively restructure the balance sheet, lower our interest costs, and really clear the decks for 2022 and beyond," CNBC reports. Webb also stated the company plans to issue 3.5% to 4.5% yield bonds with a 10-year maturity in place of the retired junk bonds. This includes an initial $1 billion in "green" bonds that will enable Ford Credit to give lower-credit car buyers financing.

Feeding into a bigger winning strategy

Crucially, escaping the fetters of its junk bonds and associated junk rating will again open Ford up to cash inflows from major institutional investors. A return to investment-grade rating will therefore likely help ordinary investors in at least two major bullish ways. Most immediately, institutional money flowing back into Ford stock should cause share value to rise, making existing shareholders' holdings more valuable.

In a big-picture sense, though, the move is even more positive for Fools with the Blue Oval in their portfolios. Ford explicitly states that the initiative will help it fund its massive expansion into electric vehicles, with $30 billion earmarked for EV production investment by 2030 and $7 billion going into its six-mile-square "Blue Oval City" factory in Tennessee and several battery-making facilities immediately.

Eschewing the half-hearted approach of some traditional automakers to the electric vehicle revolution, Ford aims to have a fifty-fifty split between EVs and gasoline vehicles in its vehicle lineup by the end of the decade. In addition to already producing some EVs, Ford says it now has more than 160,000 reservations for its Ford F-150 Lightning all-electric pickup truck. For comparison, Tesla (TSLA 2.52%) delivered 101,312 vehicles in total in 2017, and 145,846 Model 3 vehicles (out of a total 245,240 EVs) in 2018.

Ford's electrification push is arguably its most important current strategy, with Tesla's more than $1 trillion valuation highlighting the immense potential of EV sales. Ford is taking decisive large-scale action to be one of the leading electric car stocks once the mass transition from gasoline autos to EVs occurs.

Since its return to investment grade will provide a powerful boost to this electrification strategy (and, likely, share value), the answer to the question "Is Ford's junk bond buyback good news for investors?" appears to be a decisive "Yes."