The company's gains appear to have no brakes as its market capitalization blasts past $1 trillion.

Breezily beating Wall Street's consensus forecasts, electric vehicle (EV) maker Tesla (TSLA 10.97%) jolted the entire electric car sector back to life with its positive third-quarter 2021 report on Oct. 20. Shares initially dropped about 2% in after-hours trading, before achieving liftoff over the next several trading days. While its massive deal with Hertz Global Holdings (HTZ 0.76%) is making headlines, there are also potential long-term growth indicators in its Q3 results that are worth a closer look.

Elon Musk's EV enterprise beat average analyst expectations when it reported its Q3 results, not only in revenue and earnings but in several other important metrics. Revenue exceeded forecasts by only a hair, but still skyrocketed 56.9% year over year to approximately $13.8 billion. Adjusted earnings per share of $1.86 registered a 15.5% positive surprise above Wall Street's consensus, while jumping 145% year over year. Automotive revenue climbed 58% year over year to slightly more than $12 billion. Regulatory credits accounted for only $279 million of that revenue, decreasing 30% year over year, a decline showing it is automotive sales driving Tesla's gains, and not merely government support as some naysayers claim.

Despite being in the midst of building its Berlin area gigafactory, the company also slashed its total debt to $2.1 billion. This is a 74% decrease year over year from the almost $8.1 billion in total debt it carried as of Sept. 30, 2020, and a roughly 47% quarter-over-quarter decrease from its $3.99 billion in debt at the end of Q2 2021. 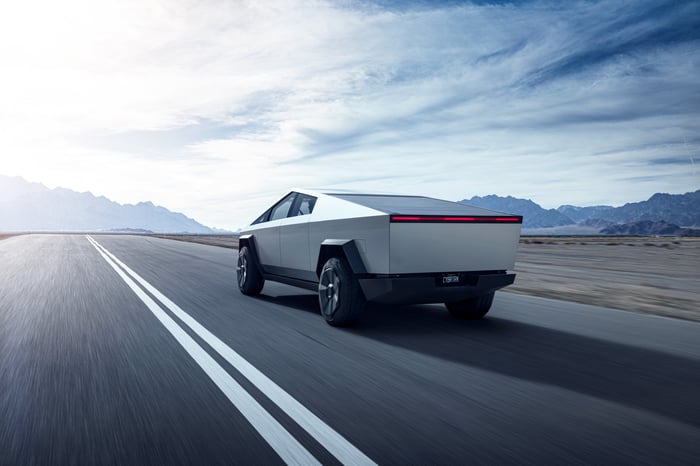 Additionally, Tesla's margin gains are notable, highlighting the profitability of its business model and strategy. Its automotive gross margin beat the estimated 28.4%, coming in at 30.5%, and increasing 281 basis points year over year. In its summary, the company noted that while its focus on lower-priced vehicles cut its average selling price by roughly 6% year over year, it still "reached an operating margin of 14.6%, exceeding our medium-term guidance of 'operating margin in low-teens.'" Operating margin surged 534 basis points compared to Q3 2020, highlighting the strength of the margin improvement.

The bears are roaring nevertheless

Bullish sentiment for Musk's maverick EV company is booming, but Tesla also attracted the usual smattering of bears arguing it's overpriced. Its market cap is indeed much higher than many long-established automakers such as Ford, climbing above a trillion dollars on Monday, Oct. 25.

GLJ Research provided a detailed analysis of why Tesla might be overvalued. Analyst Gordon Johnson cited low production numbers compared to the big established automakers -- a frequent criticism among Tesla's detractors -- and monetary losses from some of Tesla's other branches, such as its energy storage. Johnson said: "We don't think they're Amazon. We think they are AOL." Toni Sacconaghi, a Bernstein analyst, predicts an approximately 70% downside with a $300 price target. He supports his underperform rating with the CyberTruck's likely delay to 2023 and what he sees as an unjustifiably high current valuation.

What Tesla's Q3 metrics mean for the future

The bears correctly point out that Tesla's production numbers are quite low relative to the internal combustion engine (ICE) vehicle output of the world's many large legacy car companies. However, this point is moot if Tesla's value comes from the production potential it's lining up in anticipation of a history-changing pivot from ICE to EV use among the world's drivers. If this perspective is correct, current sales are unimportant compared to building a strong foundation for leading market share once the massive transformation occurs and most consumers switch to EV use, relegating ICE vehicles to horse-and-buggy obsolescence.

Tesla's Q3 report indicates it's still on track to be one of the leaders in a new, electrified vehicular world. Its strong margins are giving it a significant edge in strategic expansion without burdening its future with long-term debt. As just one example, Musk recently revealed that the company has paid off the entire $1.4 billion it borrowed from Chinese banks to build its Shanghai Gigafactory, which it now owns free and clear. Not only was the loan paid off in full, the repayment occurred extremely early, approximately 16 months after it was initially taken out.

A Clean Technica article reported the complete repayment, adding a quote from a Twitter user stating "it was repaid by the Shanghai business from internally generated funds even while construction and expansion of the factory continued." Elon Musk himself responded directly to the Clean Technica article, Tweeting "Tesla always pays its debts," apparently confirming the complete payoff of the loan, and potentially also verifying the claim that the Shanghai factory itself provided the funds to do so, though he did not address that specific part of the article.

Regardless of the exact source of the money, Tesla's high vehicle margins are key to such successful deleveraging. At 30.5% automotive gross margin, Musk's company had to sell just 91,803 vehicles at an average selling price of $50,000 to pay off the loan, while the company's Q3 deliveries alone amounted to 241,300 vehicles. While this is an oversimplification of the loan payoff process, it shows how Tesla's margin successes give it flexibility and help it maintain a healthy balance sheet.

The company is maintaining excellent margins and growing its top and bottom lines at the same time it is laying the groundwork for massive future production increases with its China and Germany gigafactory investments. It is significantly deleveraging while building extensive new factory space due to come operationally online in the coming months. Once demand cascades and EVs replace gasoline cars for general passenger use, though perhaps not for specialized vehicles, these factors appear very likely to be Tesla's springboard to a powerful, market-leading position with millions of cars sold quarterly and a much higher stock market valuation.

Good reasons exist for Tesla setting new share price and market cap records among pure-play electric car stocks. While its share price broke the $1,000 mark on Oct. 25 and will likely see a downward correction once the enthusiasm around its Q3 results and the Hertz deal wears off, it apparently still has the pedal to the metal, strengthening its position in an ever more electrified vehicle market. Tesla remains a top long-term automotive sector stock to buy and hold.