The shift to electrification continues to gain ground.

October's third week opened with announcements from two very different players in the electric vehicle (EV) market. Stellantis (STLA -1.63%), the multinational owner of Jeep, Ram, Dodge, Chrysler, Fiat, Peugeot, and many other car brands, announced plans for a new North American EV battery factory. Foxconn (FXCNF -4.09%), a Taiwanese electronics manufacturer now allied with EV start-ups Fisker (FSR -6.68%) and Lordstown Motors (RIDE 2.08%), showed the world a trio of EV prototypes. The market's reaction to all this was mixed, but the ongoing activity points to a bullish trend for the planet's vehicular electrification.

Stellantis is upping its battery capacity

Though the agreement exists as a memorandum of understanding (indicating an intention to work together but not a legally binding contract), LG Energy Solution intends to partner with Stellantis to manufacture batteries in North America. The partnership plans to launch a joint venture making 40 gigawatt-hours (GWh) of EV batteries yearly. They will start making batteries in 2024 if all goes according to plan. The press release notes the intention is to "help power Stellantis' goal of realizing more than 40% of its sales in the U.S. comprised of electrified vehicles by 2030." The factory's location hasn't yet been decided on.

While the planned battery plant is a significant step in EV manufacturing, Stellantis' investment still looks relatively limited and hesitant compared to the plans of other EV makers, present or potential.

Ford (F -7.61%), for example, is working on Blue Oval City and several battery factories, which together will crank out 129 GWh of batteries yearly. This is over three times Stellantis' commitment, while the Gigafactory that Elon Musk's Tesla (TSLA 0.91%) will soon launch near Berlin will manufacture over 50 GWh of batteries annually. 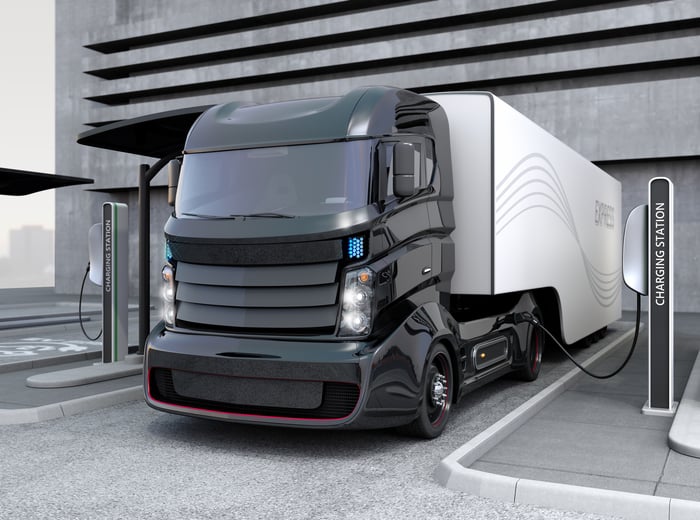 With the Gigafactory's 50 GWh expected to power around 500,000 cars, Stellantis' 40 GWh factory will presumably build the power units for approximately 400,000 EVs every year. This is a significant number, but still far short of even Tesla's current production target of roughly 1 million vehicles for 2021.

Foxconn's three new EV prototypes include a large 750-horsepower sedan, an SUV, and a passenger bus. The Model E sedan is listed as having a range of 466 miles, 61 miles more than Tesla's longest-range vehicle.

The vehicles, much like Stellantis' batteries, are slated to be manufactured by a joint venture. Foxconn means to partner with a car company from Taiwan, Yulon Group, to build the three vehicles. Remarks made during the five-hour presentation indicate the vehicles, which bear the Foxtron nameplate, are more of a proof of concept of Foxconn's EV platform and technology than the final models it may offer for sale.

Two EV start-ups -- Fisker, which plans to make the affordable Ocean SUV, and struggling Lordstown Motors -- are closely linked with Foxconn. The news about Foxconn's prototype exhibition boosted Fisker's stock, though Lordstown shares dropped despite its potentially close ties with the Taiwanese company. Foxconn's aggression in continuing to push its EV ambitions is certainly a potentially good sign for its two allies. On the flip side, however, the company's chairman Young Liu said, "Our biggest challenge is we don't know how to make cars" during the unveiling event. That's not the most reassuring forecast of Foxconn's ability to get its newly acquired Lordstown assembly plant to churn out Fisker Oceans or Lordstown Endurance pickups in the next year or two.

Is this acceleration a plus for investors?

Stellantis' shares nosed down around 2% after it announced its battery plans, though its stock value has still risen about 10.88% over the past six months. Fisker, on the other hand, gained about 2.5% immediately after Foxconn's announcement, while Foxconn's shares jumped 11% within hours of its news release. The stock market reaction appears somewhat rational, at least in this instance, since Stellantis' entry into EVs appears slow and hesitant, while Foxconn's boldness and speed could help it secure market share at a crucial time in the next year or two.

Looking beyond the short-term moves, the rapid increase in EV investment among Stellantis' long-established car brands and upstarts like Foxconn or Fisker seem to be creating a positive feedback loop for the sector. More production, or even widely publicized production plans, could generate more consumer interest in EVs. Greater consumer interest and demand, in turn, encourages more production and a faster changeover from internal combustion engines to EVs.

As the old proverb says, a rising tide lifts all boats -- though in this case, it might be more accurate to say a rising current charges up all EV stocks. More, and faster, activity is very likely bullish for these stocks and the portfolios holding them, and the positive repercussions of these latest moves will likely extend beyond the companies directly involved.