The positive trend of rising share prices for 3D printing companies that began with a Desktop Metal press release a week ago and continued through Stratasys' big earnings beat on Thursday came to a screeching halt today after 3D Systems (NYSE:DDD) reported some earnings of its own. 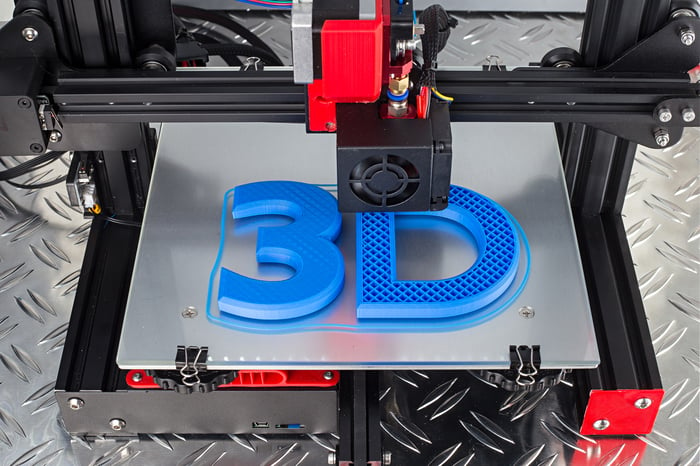 The third big 3D printing company to report earnings over the past couple of weeks, 3D Systems was supposed to earn only $0.05 per share on $144.8 million in revenue in its fiscal third quarter, according to analysts. In fact, though, 3D beat on both the top and bottom lines. Q3 earnings came in at a strong $0.08 per share, while Q3 revenue was well ahead of consensus targets at $156.1 million.

That revenue number, by the way, surged 15% year over year and would have done even better -- it "increased 35.9% when excluding businesses divested in 2020 and 2021," noted management. Moreover, including gains from those divestitures, 3D raked in a cool $2.34 per share in profit when calculated according to generally accepted accounting principles (GAAP) -- money the company can now use to reinvest in its core business.

Arguably best of all, with Q3 results now in, 3D has officially generated positive free cash flow (FCF) from its business for four consecutive quarters -- $57.8 million in all. Granted, that level of cash production still isn't good enough to make the stock an obvious bargain. 3D Systems stock still sells for a whopping 64.5 times trailing FCF -- and this may be one reason investors are shying away from it today.

3D Systems stock is at least a relative bargain, however, when compared with Stratasys at 74.4 times FCF (according to data from S&P Global Market Intelligence) or Desktop Metal -- which has no free cash flow whatsoever, and therefore a price-to-free-cash-flow valuation of literal infinity.

If you're in the market for a 3D printing stock, therefore, and ready to start researching (if not necessarily ready to buy just yet), I think 3D Systems just might be a fine place to start.