Compass Pathways (NASDAQ:CMPS) is not your typical healthcare company. The London-based clinical-stage biopharma is developing therapies for various forms of depression that center around psilocybin, the main psychoactive compound of hallucinogenic mushrooms. This compound also happens to be a Schedule I substance under the Controlled Substances Act in the U.S., meaning it is considered to have a high potential for abuse, no currently accepted medical use in treatment, and a lack of accepted safety for use under medical supervision. Compass, in turn, will face an uphill battle from a regulatory standpoint to get its products on the market in key commercial territories like the U.S., and then to get them covered by the most important third-party payers such as Medicare and Medicaid.

Highly differentiated healthcare companies, however, can be a veritable gold mine for early shareholders. For example, GW Pharmaceuticals was a money-making machine for its shareholders because of its success in the rapidly emerging cannabinoid-based prescription drug space. This cannabis-oriented drugmaker was ultimately bought out at a hefty premium by Jazz Pharmaceuticals earlier this year. Could a similar story unfold for Compass Pathways? Let's consider the company's risks and potential rewards to find out. 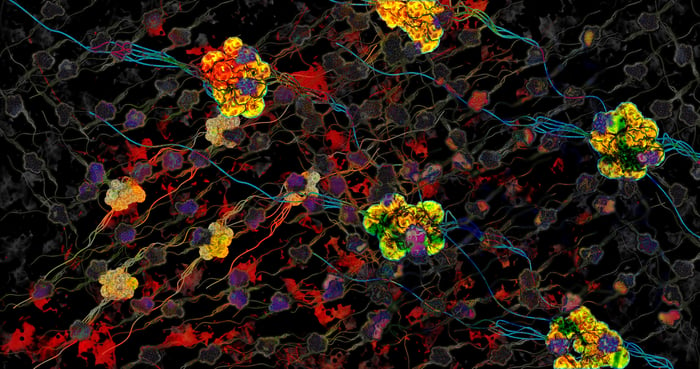 Compass: Where could this stock be headed in the next five years?

Compass' shares are currently down by close to 30% so far this year. The drugmaker's stock is also trading at a 43% discount, relative to its 52-week high, at the moment. That's an unattractive trend line, to be sure. But development-stage biopharma stocks wax and wane all the time. Compass, for its part, is only the latest within this group to post stomach-churning levels of volatility in terms of its share price. History has proven, though, that it can be extremely profitable for investors to pounce on promising biopharma stocks during a down period.

What's the main attraction for potential investors with this so-called psychedelic stock? Compass' lead product candidate is COMP360, a highly purified dose of psilocybin indicated for patients with treatment-resistant depression (TRD) and administered in a controlled-setting under the guidance of a trained therapist. The drug recently posted positive top-line results for the highest dose (25 mg) in a phase 2b trial. Specifically, Compass said that the 25mg patient group exhibited a highly significant reduction in key TRD symptoms when compared to patients in the 1mg group at week three. Additionally, 24.1% of the 25mg patient group exhibited a sustained response, compared to 10.1% in the 1mg patient cohort. The highest dose of COMP360 in this mid-stage trial, though, was associated with elevated levels of serious adverse effects, such as suicidal behavior, intentional self-injury, and suicidal ideation.

With this dosing study behind it, Compass' management plans on opening discussions with regulators about initiating a pivotal trial for COMP360 sometime next year. As pivotal TRD trials take around two-plus years to complete, COMP360 seems to be on track to possibly make its market debut in 2025 at the earliest. An effective TRD treatment that captures the bulk of the market is thought to be worth anywhere from $1.3 billion to $3 billion per year in revenue, according to various analyst and company-specific reports. COMP360, as a drug that will require supervision by a therapist to be administered, may have trouble reaching reaching either of these sizable sales estimates, however. Because of these restrictions and the potential for fierce competition for this indication in the near future, COMP360 will likely top out at between $400 million to perhaps $700 million in annual sales for TRD.

Upon completing a successful phase 3 trial, Compass' stock would thus be worth between $48 to $84 a share based on COMP360's TRD indication alone, and assuming only minor amounts of shareholder dilution in the interim. The company is also exploring the utility of psilocybin-based therapies in several other high-value indications, which could shift these price targets upward in a significant way. This big picture is that Compass' stock arguably has an upside potential of 43% on the low side to 151% on the high side over the next three to four years, based solely on the commercial potential of its lead therapy and indication.

Compass: Competition is perhaps the biggest risk for shareholders

Because of the high unmet need in the TRD space and the potential to rake in billions in annual sales as a result, this indication has attracted numerous would-be competitors. For example, Johnson & Johnson broke into this market recently with Spravato. Axsome Therapeutics is hoping to become a dominant player in this field with AXS-05. Sage Therapeutics and Biogen are currently trialing zuranolone for TRD. And there are other companies besides Compass developing psilocybin-based treatments for TRD as well.

So while investors might be concerned mainly with the onerous regulatory landscape facing the company, the biggest threat to Compass is probably going to be this sea of potential competitors in TRD. Axsome could turn out to be a particularly noteworthy competitor. AXS-05, after all, has already posted stellar mid-stage results for TRD. Moreover, this clinical-stage drugmaker is more than likely going to be taken out by a big pharma at some point. Compass may have serious trouble making inroads against a big pharma that has decades of experience marketing psych medications.

Is Compass' stock a screaming buy at these levels? The bad news is that biotech investors aren't the most patient of folks. So, with a long and uncertain road ahead of it in the clinic, Compass' stock may have further to fall yet. But if you are willing to hold this stock for a minimum of five years and employ a dollar-cost averaging strategy over this period, this novel biopharma could turn out to be a once-in-a-lifetime type of bargain. If the company's platform is validated by a regulatory approval, after all, its shares could possibly jump by 200% to 300% in five year's time. Investors, however, shouldn't expect Compass to deliver market-beating gains anytime soon. This story is going to take a while to unfold, and there will be an untold number of twists and turns along the way.