Please ensure Javascript is enabled for purposes of website accessibility
Log In Help Join The Motley Fool
Free Article
Join Nearly 1 Million Premium Members And Get More In-Depth Stock Guidance and Research
By Will Healy – Updated Nov 13, 2021 at 8:05AM

Square continues to expand its reach and improve its offerings.

Square (SQ 0.52%) announced its earnings for the third quarter of 2021 following the Thursday trading session on November 4. The San Francisco-based fintech giant failed to impress investors amid slowing growth numbers.

However, the company continues to expand its capabilities and the markets it serves. Also, a deeper dive into the numbers could point to longer-term gains for the fintech stock. 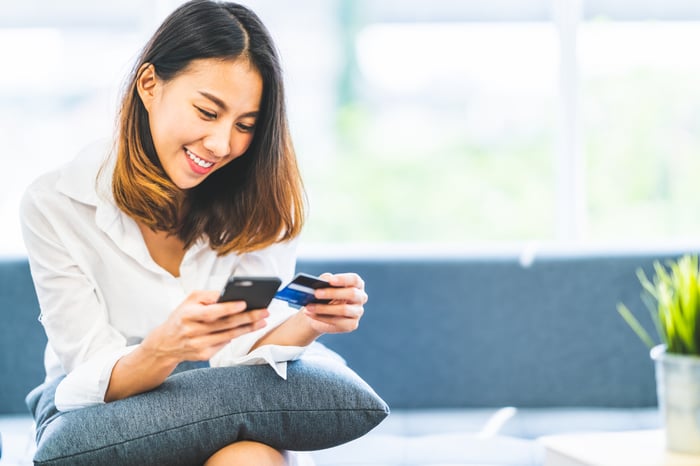 Square by the numbers

Revenue for the third quarter of 2021 came in at $3.8 billion, growing 26% compared with the year-ago quarter. However, the company also reported a loss of $3 million on an unadjusted basis, a considerable drop from the $37 million profit in the same quarter last year.

GAAP operating costs surged by 49% during that period as the company invested more heavily in product development. Square also faced a 74% increase in general and administrative costs due to additional headcount and merger-related expenses related to the acquisition of Afterpay.

Additionally, product development costs rose 61% as the company hired more people in engineering, data science, and design. Square also anticipates operating expenses will climb by 55% on a non-GAAP basis in the fourth quarter.

When removing share-based compensation and other costs, Square earned an adjusted net income of $192 Nonetheless, investor reaction seemed muted as the stock fell by 1% in trading the following day. However, Square stock has seen relatively little activity in 2021 as the stock has risen by only about 12%.

Why this may boost Square longer term

Still, the numbers point to promising signs for the stock. While its operating costs have risen significantly, Square has invested more heavily in its Cash App and seller ecosystems.

These outlays are critical to building on the company's successes. Due to the opening of Square's industrial bank earlier this year, the company gained a foothold in the traditional finance business. Consequently, this allows business customers to handle virtually all of their finance-related needs within Square's ecosystem.

Additionally, on top of its addition of Bitcoin trading capabilities to Cash App, the entrance into the buy now, pay later business with the purchase of Afterpay could make Square even more unstoppable. This move further boosts the capabilities of both the Cash App and seller platforms.

Moreover, Cash App has recently expanded further by offering services to teens, who can use the app for peer-to-peer payments after gaining approval from a parent or guardian. This opens Cash App to an addressable market of around 20 million people.

Square's expansion within the Eurozone also continues as it began to offer its products and services in France. This empowers the company to capitalize on France's small-business environment, e-commerce sector, and the second-largest card payments market in Europe.

Furthermore, its P/E ratio stands at an elevated level exceeding 210. Still, heavy investments in the company have skewed this figure higher. Amid the slower stock-price growth, the price-to-sales (P/S) ratio has fallen to around eight. This is lower than its arch rival PayPal's 11 P/S ratio, making it an attractive choice for new investors.

Should I consider Square?

Despite the lukewarm investor reception of the earnings report, investors may want to consider Square. The company's losses stemmed primarily from more intensive investments in the seller and Cash App ecosystems, actions that could boost profits in future quarters. Moreover, with its expansion into new countries and a sales multiple remaining well below that of PayPal, the stock should gain more traction as its ecosystem continues to play a more significant role in fintech.