One's on the rise while the other's sinking, but both are making waves.

Stocks have been on a record run lately, and the Nasdaq Composite (^IXIC) has continued to move to all-time highs recently. Coming into a new week, the Nasdaq looked poised to keep posting gains, with futures up about a quarter percent to 16,234 as of 8 a.m. EST.

A big part of what has driven the Nasdaq higher lately has been a rising interest in stocks other than the tech behemoths that many investors focus on. That was evident from a big rise in Dollar Tree (DLTR -4.53%) shares, which looked poised to hit an all-time high of their own. Yet there was also some disappointing news this morning, as Oatly Group (OTLY -2.59%) wasn't able to meet the high expectations of its shareholders. We'll look at both companies below.

Oatly Group saw its stock drop almost 14% in premarket trading on Monday, putting it on pace for its worst levels since going public earlier this year. The plant-based dairy company's third-quarter financial report raised concerns about the sustainability of its growth even as consumers remained interested in its products. 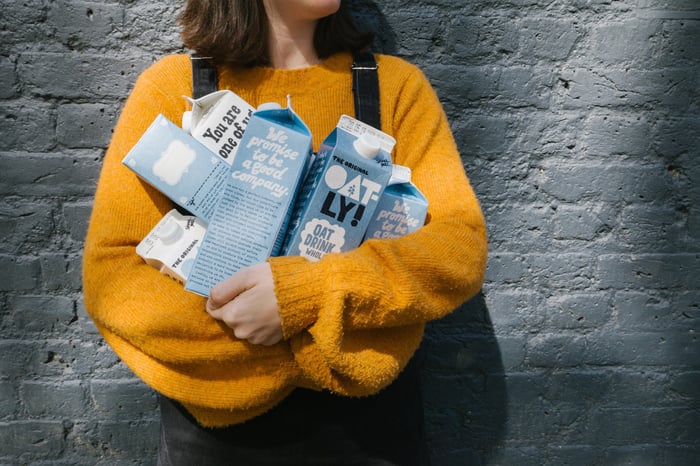 Oatly's release for the third quarter featured some encouraging numbers. Revenue rose 49% year over year to $171 million, which was a record for the company. Oatly cited strength both in retail and in food-service distribution channels, especially with restaurants seeing pandemic-related restrictions continue to ease in some parts of the world. Production jumped 77% to 131 million liters.

However, Oatly saw pressure in other areas. Gross margin fell more than 5 percentage points to 26.2%, and quarterly losses widened substantially year over year. Oatly cited higher expenses for shipping and logistics, as well as some challenges from seeking to boost its production capacity at its facility in Ogden, Utah. The company expects gross margin to rise above 40% in the long run, but it needs to reach its economies of scale first. Exactly how long that will take remains a question, and until investors have answers, they seem to lack confidence in the stock's ability to move upward.

On the upside, shares of Dollar Tree were higher by more than 6% in premarket trading. That would be enough to send the retail stock to an all-time high if it opened at or above that level.

Late Friday, regulatory filings indicated that an activist investor has taken a substantial position in the dollar-store retailer. Mantle Ridge reportedly has invested $1.8 billion in Dollar Tree, and there's ample speculation about how the institutional activist will look to get the company to take steps to enhance shareholder performance and unlock its full value.

Following the move, Dollar Tree shares got upgrades from a few stock analysts on Wall Street. Deutsche Bank and R5 Capital boosted their ratings on the stock from hold to buy, while J.P. Morgan added Dollar Tree to its analyst focus list.

Dollar Tree has dramatically underperformed rival Dollar General (DG -1.39%) over the past several years, with its Family Dollar unit in particular seeing some challenges. If Mantle Ridge can help Dollar Tree get past its obstacles and tap fully into the potential available in dollar-store retail, then shareholders could see the company catch up quickly to its chief competitor and deliver strong returns for investors.