Please ensure Javascript is enabled for purposes of website accessibility
Log In Help Join The Motley Fool
Free Article Join Over 1 Million Premium Members And Get More In-Depth Stock Guidance and Research
By Timothy Green - May 27, 2021 at 8:20AM

Plant-based milk company Oatly (OTLY -7.88%), a master of "liquid oat technology," went public earlier this month. The company's products, which include oat milk, oat-based yogurt, oat-based ice cream, and a variety of other oat-based items, have been growing in popularity in the U.S.

Here are five things anyone considering investing in Oatly stock should know.

1. Oat milk is having a moment

Go into any coffee shop and chances are good that oat milk is on the menu. Just a few years ago, oat milk wasn't a thing in the U.S. Today, it accounts for about 14% of the plant-based milk retail market. 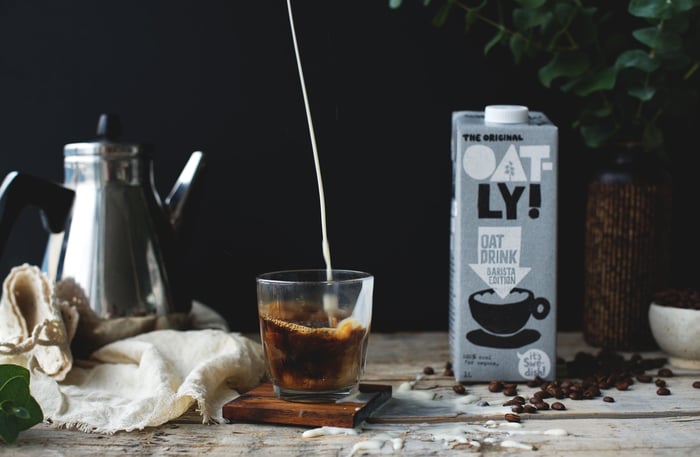 Soy milk was big for a while. Then came almond milk, which still dominates the U.S. plant-based milk market today. Oat milk is on the rise, and if its trajectory in the U.S. follows Sweden, the U.K., and Germany, oat milk will be the new favorite within a few years.

This trend is mostly being driven by Oatly, with its punchy advertising and effective brand building. When it enters a new market, Oatly first focuses on coffee shops to build brand awareness. That brand awareness then drives sales of Oatly products through retail channels.

Oat milk may turn out to be a trend that eventually fades away in favor of some other alternative. But for now, oat milk is only getting more popular.

2. The growth opportunity is huge

Oatly generated $421 million of revenue in 2020, more than double what it produced in 2019. The global plant-based diary retail market was worth $18 billion last year, and the market could grow at a double-digit pace for years as consumers turn away from cow's milk for environmental and health reasons, both real and perceived.

This isn't the place to discuss whether a concoction of oats, vegetable oil, and water is healthier than cow's milk, or almond milk, or any of the other alternatives. What people believe is what matters for Oatly's growth prospects, and the company's successful marketing certainly pushes the health angle.

3. Oatly is not profitable

One kind of surprising thing about Oatly is that the company is not even close to turning a profit. Despite its core product being comprised of inexpensive ingredients and retailing for around $5 per half gallon in the U.S., far more than standard cow's milk, the company only managed a gross margin of around 30%.

Selling, general, and administrative costs totaled $168 million in 2020, about 40% of revenue. Marketing expenses are probably a big part of those costs, although the company doesn't appear to break out marketing costs directly.

Oatly booked an operating loss of $47 million and a net loss of $60 million for 2020. Both metrics worsened from 2019. Cash flow from operations was also negative, and the company is pouring cash into expansion.

4. Oatly is going all-in on expansion

Oatly is expecting demand for its product to soar in the coming years. To be able to meet that demand, the company has big spending plans:

Oatly could spend as much as $1 billion over the next three years building up capacity for its oat-based products, which means free cash flow will almost certainly remain deep in the red. If Oatly is right about demand, this expansion could pay off in a big way down the road. If it's wrong about demand, or if competition limits its market share in the U.S., the company may have to dial back its ambitions.

5. The stock is very expensive

Oatly is valued at about $12.5 billion as of this writing. That's about 30 times sales, although sales are growing very quickly, to be fair.

For comparison, meat substitute pioneer Beyond Meat is valued at about $8 billion and produced revenue of $325 million in 2020 compared to Oatly's $421 million. Neither company is profitable, and both companies are going up against commodity products.

Oatly needs to keep growing sales quickly, it needs to eventually prove that selling oat milk is a profitable endeavor, and it needs to fend off competition. Does Oatly have some kind of advantage over competing oat milks? It has a long history crafting oat-based products, but that may not matter much if alternatives are less expensive.

Oatly is dominant in its home market of Sweden. If it can repeat that success in the U.S., the stock could certainly grow into its valuation. But that's a big if.

Why Oatly Stock Tanked on Tuesday

Why Oatly Stock Jumped 16% in May

This Is Why Oatly Group Stock Fell 29% Last Month