The aircraft manufacturer has good news to report from Dubai, sending its stock flying cloud-high.

Shares of aerospace giant Boeing (BA 0.81%) were 4.4% higher by 10:50 a.m. EST on Monday on multiple announcements coming out of the Dubai Airshow over the weekend.

First and foremost, Bloomberg quoted the company's head of commercial airplanes, Stan Deal, as saying he's hopeful that China will soon clear Boeing's 737 to resume flying in the world's most populous country.

And perhaps most encouraging of all, as international travel is still recovering and supply chains remain snarled, Deal told CNBC that "the freighter markets are on fire right now." He was talking about air freighters, which can carry cargo quickly as cargo ships and trucks remain stuck down on the ground.

Apparently, those air freighters are selling well enough that Boeing is converting some of its 737 passenger production lines to produce 737-800BCF freighters instead. According to Reuters, Mounir also said the company is in "advanced talks" to sell a future freighter-tailored 777X airplane. 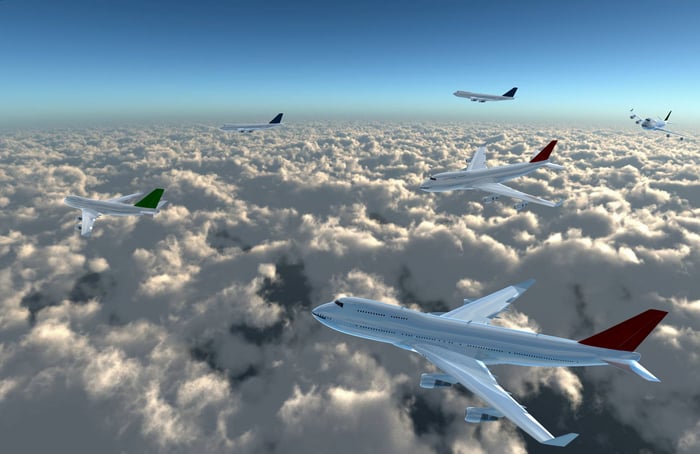 Things are coming up roses for Boeing today, and that bodes well for analyst forecasts that Boeing will return to profitability this year after two straight years of booking losses on the basis of generally accepted accounting principles. That being said, I don't think investors need to be in any rush to board just yet.

Based on consensus forecasts compiled by S&P Global Market Intelligence, Boeing will earn at most $0.13 per share this year, giving the stock an implied current-year price-to-earnings ratio of 1,767!

Even if profits continue to improve in 2022 and beyond, you have to go out at least as far as 2023 estimates ($10.87 per share) before you get to anything like a normal-sounding valuation on Boeing stock at 21 times earnings.