Adaptimmune Therapeutics and Agenus are having a tough go of it in the final quarter of 2021.

November has been brutal for biotech stocks. The SPDR S&P Biotech ETF has dropped by 5.1% just 2 1/2 weeks into the month. This bellwether biotech exchange-traded fund (ETF), in turn, has now declined by a hefty 12.7% so far this year. While no single culprit can be fingered as the sole cause of biotech's year-end sell-off, the cryptocurrency craze and tax-loss selling are probably high up on the list.

In short, investors have seemingly favored high-flying cryptocurrencies as their go-to asset class for risky growth plays of late, a niche formerly occupied almost exclusively by developmental-stage biotechs. On the tax-loss-selling side of things, it's no secret that biotechs -- especially small-cap companies -- haven't performed well this year for the most part, making them top candidates for tax-loss harvesting.

This downturn, however, presents some intriguing buying opportunities. Which biotechs have the best chance of rebounding soon? Adaptimmune Therapeutics (ADAP 0.57%) and Agenus (AGEN 3.48%) have both turned into so-called "falling-knife stocks" this month (see chart below). Here's why savvy investors might want to take advantage of this sizable pullback in these two clinical-stage biotech stocks. 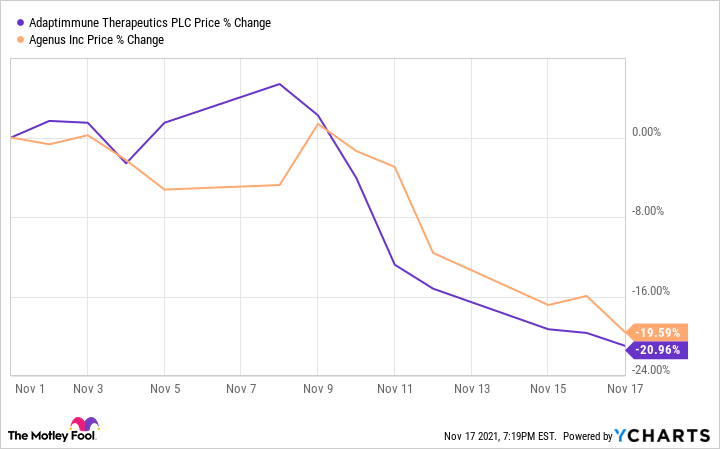 Adaptimmune is a cellular-immunotherapy company developing genetically modified T-cells for various forms of solid tumors. Earlier this month, the biotech reported that its lead product candidate, afamitresgene autoleucel (aka afami-cel), will meet its primary endpoint in a registration-enabling trial for patients with advanced synovial sarcoma or myxoid/round cell liposarcoma.

Adaptimmune plans on using this data to file for the therapy's Biologics License Application (BLA) from the Food and Drug Administration (FDA) next year. The stock market wasn't impressed, however. Since this clinical update less than two weeks ago, Adaptimmune's shares have dropped by another 10%. 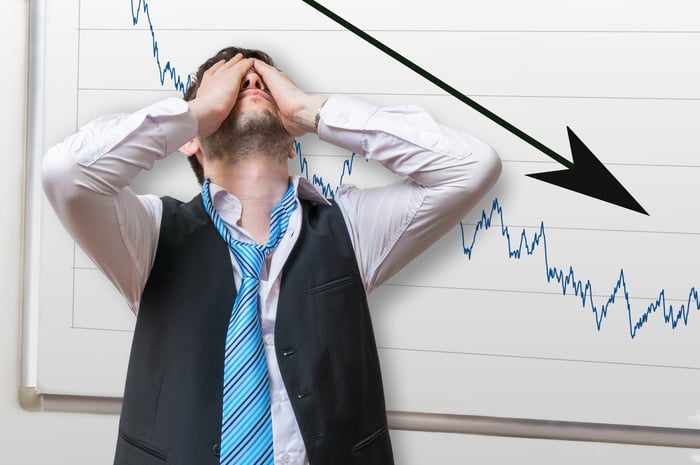 Why is the market punishing this late-stage cancer immunotherapy stock? Two issues appear to be weighing down this promising biotech stock. First, anti-cancer cellular therapies have a painfully long ramp-up time in terms of sales, due to the burdensome logistics involved in administering these cutting-edge treatments. Second, afami-cel's first indication is unlikely to be a big moneymaker for the company.

Why is Adaptimmune a buy on this sizable downturn? The short answer is that the company sports a unique therapeutic platform that was broadly validated by afami-cel's success in advanced synovial sarcoma. While the company's organic growth prospects over the next two years aren't stellar, Adaptimmune stands out as an intriguing takeover candidate in the wake of these strong pivotal stage results. Keeping with this theme, there are numerous big pharmas and blue chip biotech companies that will likely pursue bolt-on acquisitions next year.

Agenus: Investor fatigue has set in

Agenus' shares have been on a downward spiral ever since the FDA requested the company withdraw its BLA for the checkpoint inhibitor balstilimab last month. The agency requested this disappointing move from the company in response to an earlier-than-expected full approval for Merck's Keytruda for roughly the same indication (second-line cervical cancer).

Following this regulatory setback, the biotech subsequently announced that it would relegate the former lead checkpoint inhibitors balstilimab and zalifrelimab to supportive roles, while focusing the bulk of its attention on developing the earlier-stage anti-cancer asset AGEN1181. Agenus' long-awaited debut as a commercial-stage oncology company will thus have to wait, perhaps for a few more years.

Beleaguered shareholders, for their part, clearly didn't want to hear about this change of plans. This balstilimab BLA, after all, was essentially six long years in the making.

Why is Agenus worth scooping up on this latest pullback? While investor fatigue appears to have set in with this small-cap biotech stock, this negative sentiment doesn't fundamentally change its long-term upside potential. The fact of the matter is that balstilimab and zalifrelimab never had a high ceiling from a commercial standpoint. AGEN1181, on the other hand, could become a blockbuster-level product in the solid-tumor setting before the end of the decade. And if this line holds, Agenus' stock ought to quadruple in value within the next few years.

The caveat here is that the biotech's growth story will almost certainly be a multiyear project after this turn of events -- barring a buyout from one of its partners. Investors, therefore, probably shouldn't buy shares unless they're willing to wait for a minimum of two to (perhaps) three years for a big payday.