Roku's (NASDAQ:ROKU) stock plunged 11% on Nov. 17 after the streaming device and software company was hit by an analyst downgrade. MoffettNathanson analyst Michael Nathanson cut Roku's rating from "neutral" to "sell" and reduced his price target from $330 to $220.

In a note to investors, Nathanson said Wall Street's long-term revenue and earnings estimates for Roku were "too damn high." In order to achieve these targets, the company needed to monetize an "absurdly high portion" of its ad impressions on "long-tail" video streams -- content below the level of top-tier hits. Nathanson believes Roku's revenue growth will decelerate, and that its margins will be squeezed by higher content costs and R&D investments.

But as Roku's stock declined, Cathie Wood's ARK Invest bought 310,200 additional shares of the streaming company. As of this writing, Roku accounts for 4.92% of her flagship ARK Innovation ETF (NYSEMKT:ARKK) and 3.95% of the ARK Next Generation Internet ETF (NYSEMKT:ARKW) fund. 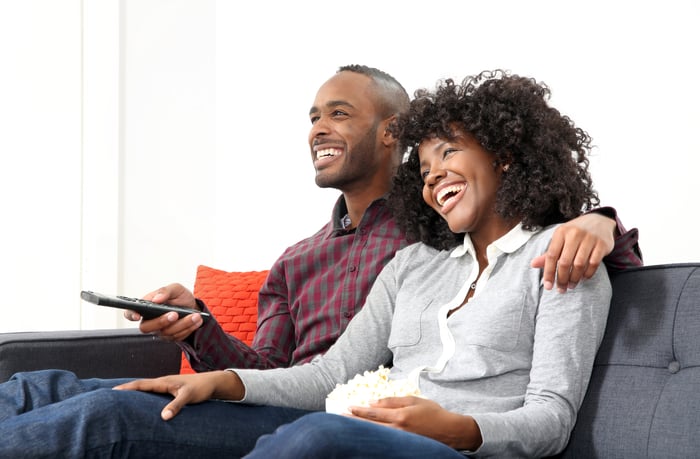 Nathanson's pessimism and Wood's optimism are generating a lot of buzz for Roku's stock, but which perspective actually makes more sense?

Are Wall Street's estimates too high?

Those numbers suggest that Roku's growth peaked in 2020, but investors should remember three things.

First, Roku's growth accelerated significantly during the pandemic as more people stayed at home, but it now faces tougher year-over-year comparisons in a post-pandemic market.

Second, Roku's player sales, which accounted for 17% of its top line in the first nine months of 2021, are being temporarily disrupted by component shortages and other supply chain constraints.

Lastly, those supply chain challenges are causing some companies to reduce their ad spending -- which could generate near-term headwinds for Roku's platform business.

But at the same time, Roku's three core metrics -- its active accounts, streaming hours, and average revenue per user (ARPU) -- all improved both sequentially and year-over-year in the third quarter:

Roku's ability to grow all three of these key metrics by double-digit percentages on top of the pandemic-fueled growth of 2020 is very impressive -- and indicates that the competitive threats might be overstated.

Amazon (NASDAQ:AMZN), which sells Fire TV devices and recently launched its own smart TVs, is often cited as a major competitor. However, I believe that retailers in direct competition with Amazon's e-commerce operations might be much more inclined to promote Roku's smart TVs instead of Amazon's.

Nathanson believes the Roku Channel's ad revenue growth will decelerate as companies consolidate their overall ad spending on connected TV platforms. But during the latest conference call, Roku's senior VP Scott Rosenberg said its "video ad business roughly doubled" year over year and it didn't face any "substantial deceleration" even though the quarter measured up against "challenging" year-ago comps.

Based on those statements, it doesn't seem like Wall Street's average estimate of 36% revenue growth next year is terribly high. Roku's stock also doesn't seem all that expensive at ten times these revenue projections.

What does Cathie Wood think?

Meanwhile, growth-stock investor Cathie Wood had been accumulating a lot of shares of Roku for ARK Invest's funds even before its latest decline. Earlier this year, Wood said Roku would benefit from the "huge transition from linear TV to streaming," praised the expansion of its software platform, and declared that the company was "finding really good success" in its international expansion.

The robust growth of its platform business, which increased its revenues 99% year over year in the first nine months of 2021, supports ARK's thesis.

Roku still generates less than 10% of its revenue overseas. However, CFO Steve Louden said on the third-quarter call that the company was already making progress in its expansion into Europe and Latin America, and that it expects its international users to account for a "greater share of the active accounts" in the future.

Who should you believe?

I own shares of Roku, but I'm a bit skeptical of both takes. I don't think Roku's advertising business is headed off a cliff, as Nathanson suggests, but I'm also not ignoring the near-term challenges posed by the tough post-pandemic comparisons and supply chain constraints. At the same time, I also think Wood's bullish take -- and her aggressive purchases of Roku at much higher prices earlier this year -- ignores a lot of those problems.

Instead of listening to these two pundits, investors should do their own homework. Roku might be a great long-term play on the death of linear TV platforms, but a lot of growth is already baked into the stock. It needs to continue to grow its audience, expand its ecosystem, maintain healthy margins, and stay one step ahead of its competitors in order to justify that generous premium.