Shares of Roblox (RBLX 4.95%) were trading up 13.6% week to date as of 1:47 p.m. ET on Thursday, according to data provided by S&P Global Market Intelligence. The stock initially took off after the company's better-than-expected third-quarter earnings results on Nov. 8. But earlier this week, management outlined its long-term vision to significantly expand its market potential, and investors walked away feeling even more optimistic about the company's prospects.

The stock is now up 83% since its initial listing earlier this year. 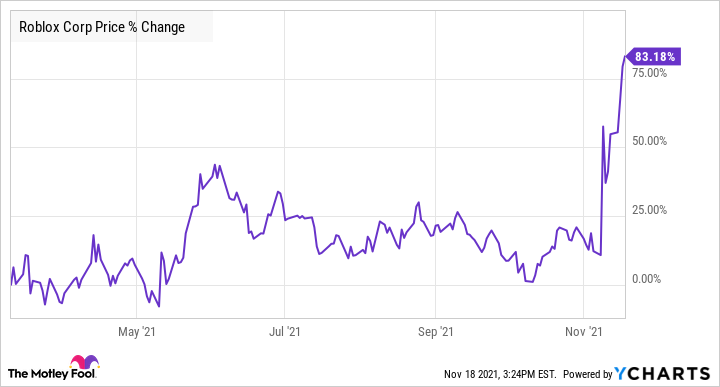 Roblox ended the third quarter with 47.3 million daily active users, but management wants to grow the platform to 1 billion. Executives believe the platform's ability to connect one another socially through immersive content can accomplish that over time. It's an achievable goal, considering the growth of the interactive entertainment industry, which is larger than movies and music,in addition to the hundreds of millions of people who already use social media.

Connecting people inside 3D virtual environments, or what's known as the metaverse, is largely seen as the future of social media. Facebook recently changed its name to Meta Platforms, and the graphics chip maker Nvidia recently launched its Omniverse platform to serve the development of these virtual environments. All the stars are aligning around this opportunity, which puts Roblox in a great position.

Roblox has already had success in bringing live virtual concerts to its users, which can expand the appeal of the platform beyond gaming to a wider and older audience. In September, Roblox launched listening parties, where artists can premiere a new album on the platform. There's also a lot of potential to grow the platform with educational content.

Right now, Roblox is primarily about developers creating interesting games that keep users engaged. Total hours spent on the platform reached 11 billion last quarter for an increase of 28% year over year, which looks quite strong with kids going back to school.

As graphics technology advances, the experiences on Roblox will get even more immersive and provide a catalyst for more time spent on the platform. The stock's breakout to new highs this week could be just the start of a long-term market-beater.