Hours spent on Roblox is continuing to climb, crossing the 10 billion level in the third quarter.

Roblox (RBLX -2.54%) delivered a solid third-quarter earnings report that showed engagement on the platform remaining quite strong despite users having more opportunities to get out and spend time doing other things.

Users spent a total of 11 billion hours on the platform in Q3, up 28% year over year and roughly triple the number of hours spent in Q3 2019. That is impressive compared to total hours streamed on Roku, where users spent 18 billion hours watching streaming content last quarter for an increase of 21% year over year.

One interesting development last quarter was Roblox's ability to tap into the popularity of Netflix's (NFLX -1.13%) hit series Squid Game, which reveals an important advantage for this gaming platform to keep users spending time on the platform by regularly generating new experiences. 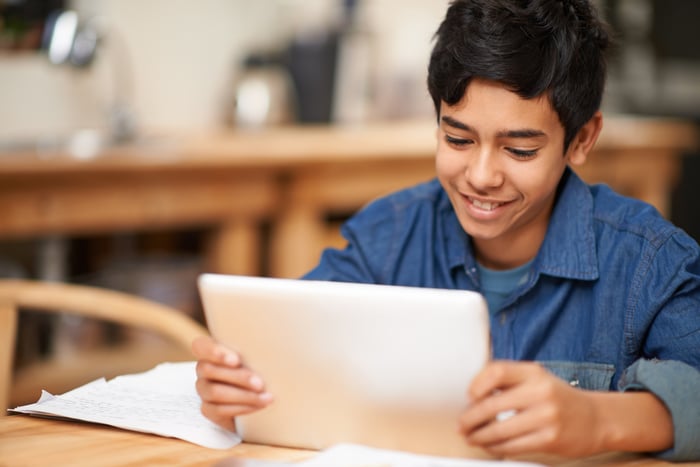 Management attributed the growth in time spent on the platform to the expanding content available to users. Roblox has been ramping up spending to reward developers for their work making content for the platform, and it's paying off with an increasing variety of games and other experiences.

Developer-exchange fees increased 52% over the year-ago quarter to $130 million, which represented a quarter of Roblox's total revenue in Q3. Roblox is aiming to deliver $500 million to developers for the full year. While this higher spending has pressured profits, the new experiences that developers are creating for the platform are making tremendous gains in attracting older users.

In Q3 2021, Roblox's user base was evenly split between users under 13 years of age and over 13. However, in the same quarter two years ago, only 39% of Roblox users were over 13, which shows a significant shift happening in terms of the age breakdown of the installed base. The platform is particularly seeing strong growth with users between the ages of 17 to 24.

One competitive advantage for Roblox

The "aging up" of Roblox could lead to further growth in engagement on the platform over the next several years. An older demographic opens up the platform to more mature experiences, and these in turn can allow Roblox to tap into events and entertainment that go viral across pop culture.

One example is the recent hit series Squid Game, which was released in September and quickly became Netflix's most popular show. Within weeks, Roblox was flooded with loads of games based on the show. These games, in addition to virtual concerts and other events sponsored by third-party brands on the platform, are contributing to the growing engagement on Roblox.

Most importantly, the Squid Game experiences were created by the developer community, not sponsored by Netflix. There are millions of developers creating content for Roblox, which allows the platform to respond quickly to whatever users are interested in at any given moment. This is a huge advantage in keeping engagement up in a very competitive world for screen time.

Netflix's recently unveiled entry into mobile-game development is an effort to keep subscribers engaged, but Roblox is showing it's ahead of the curve in the entertainment industry.

Older users are likely going to have more money to spend on Robux, the virtual currency that is used to buy extra content, which is another positive outcome of expanding the user base.

While average bookings per user decreased by 2% year over year in Q3, spending per user is still up 49% compared to Q3 2019. Management attributed the recent decline to a shift in geographic mix of the user base, but as long as hours spent on the platform continue to increase, higher user monetization, revenue, and free cash flow will follow.

Overall, Roblox is starting to look the part of a monster entertainment platform. It's still in the early stages of expanding its user base to a wider demographic worldwide, which I believe makes the stock even more worth considering after the post-earnings pop.

Here's Why Roblox Stock Was Falling This Week
409%