Is Palantir a potentially revolutionary innovator or an overvalued trap?

Palantir (PLTR 4.28%) had its initial public offering at the end of last year's third quarter, and it's since gone on to become one of the most hotly contested stocks on the market. The company is an early leader in its corner of the data-analytics service industry, but its lofty valuation and somewhat uncertain long-term business outlook raise some complex questions about whether the stock will provide the kind of performance investors are looking for.

Read on to see where two Motley Fool contributors come down on the bull vs. bear debate. 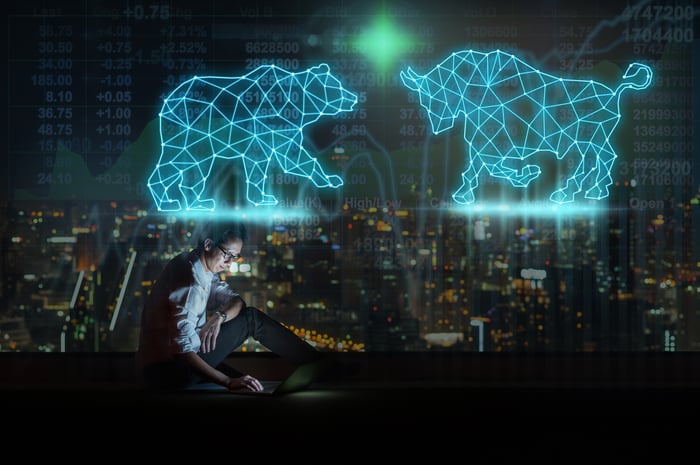 Bull case: Palantir is an early leader in a promising market

Keith Noonan: Palantir provides software platforms that make it possible for its customers to gather and analyze huge swaths of information from a wide variety of sources. The company counts government organizations including the CIA, FBI, and Centers for Disease Control and Prevention among its list of clients, and it's been rapidly bringing private-sector customers on board as well. The analytics specialist has positioned itself as an early leader in a fast-emerging industry, and its early-mover positioning and the evolving nature of its artificial-intelligence-powered software could help it build a lasting moat.

Palantir posted a small adjusted profit last quarter thanks to solid operating margins and revenue that surged 36% compared to the prior-year period. The company expects sales to climb 40% this year, and it also substantially increased its full-year target for free cash flow, upping guidance from $300 million to $400 million. However, investors reacted negatively to the report due to signs of slowing spending growth in the public sector and the company's reliance on issuing stock for employee compensation. Palantir's share price is now down roughly 2% year to date and roughly 49% from the high it hit earlier this year.

Looking out past 2021, Palantir expects that it will be able to deliver annual sales growth exceeding 30% through each of the next four years. It almost goes without saying that a lot could change over that time period, but the company's guidance doesn't look outlandish in the context of the business's strong performance and the likelihood that its category of data analytics services will continue to see major demand tailwinds.

The ability to gather and analyze valuable data will be at the very heart of success for public- and private-sector organizations over the next decade and beyond, and Palantir is a forward-thinking company that's operating at the intersection of some huge long-term growth trends.

Keithen Drury: Palantir got its start by catering to government entities. Now it is expanding to civilian businesses and must adapt to different customer requests. Plenty of companies have transitioned from their primary focus into ancillary markets and succeeded, but many have failed as well.

Potentially suffering from not focusing on one customer group, Palantir saw its third-quarter government revenue increase 34% year over year compared to a 66% second-quarter year-over-year increase. Government contracts make up more than half of Palantir's total revenue, so this slowdown is concerning. Still, its contracts tend to be lumpy, so this could be a false alarm.

While the business might be succeeding in some areas, being a shareholder may not bear the same fruit. Palantir compensates its employees heavily with stock. As a result, its share count has been rising.

Without adding to an initial investment, one share purchased a year ago now controls 11% less of the company. The 6.2% overall U.S. economy inflation rate is making headlines -- imagine if it were 11%. This is what the share count increase is doing to investors. As a result, some portion of Palantir's stock returns is getting lost to the rising share count.

Cost of revenue gives investors insight into how a company spends to produce more sales. After removing stock-based compensation, Palantir's sales and marketing costs grew 36%, and its general and administrative costs fell 34%. Both indicate positive signs for investors, as the company is expanding its sales team to bring new customers on board and cutting its overhead.

However, its research and development expenses rose just 5%. This should set off an alarm for investors. A company that doesn't continuously innovate and expand its product offerings is surviving on borrowed time. A new competitor will eventually arise and challenge Palantir if it continues resting on its same product base.

Valuation cannot be ignored for any company, and Palantir falls on the high end of the scale. Its stock trades at over 30 times sales, a hefty multiple for any company regardless of its growth rate. It also claims an adjusted operating margin of 30%, but it falls to a 17% loss once stock-based compensation is added back.

Palantir has a solid business behind it and will continue growing. However, investors will not share in the company's success if it can't get its stock-based compensation under control.

Is Palantir stock right for you?

With its growth-dependent valuation, Palantir isn't a low-risk stock. The company has been growing at an impressive clip and could have a long runway for expansion, but its reliance on issuing stock in order to fund its operations sets up a potentially perilous dynamic if it falls short of the strong growth targets it has laid out.

For risk-tolerant investors who see promise in Palantir's efforts to lead an emerging category in data-analytics services, the stock has the potential to emerge as a big winner over the long term. But investors also have other strong candidates to consider in the cloud software space that offer smaller risk profiles.

Palantir Is Starting 2023 With A Bang

Could Palantir Become the Next Salesforce?
401%