Electronics retailer Best Buy (NYSE:BBY) got slammed in the stock market after release of its third-quarter earnings report on Nov. 23 that revealed some potentially alarming trends. Up until then, the company had enjoyed a nice bull run with its stock climbing some 40% for the year. However, with organized crime actually significant enough to reduce margins and with the company leaving its guidance largely unchanged, the stock plunged in response.

Here's why the market may be overreacting, but also why caution is probably wise.

In the first half of September, grocery and pharmacy chain Kroger (NYSE:KR) revealed that a considerable amount of merchandise was walking out the door of many locations without visiting the checkout lane first. Theft (known as "shrinkage") had reduced Kroger's margin, according to CEO Rodney McMullen, accounting for 15 out of a 60-basis-point gross margin drop. During Kroger's Q2 earnings call, McMullen remarked on how the shrinkage was "heavily driven by organized crime or at least appears to be." 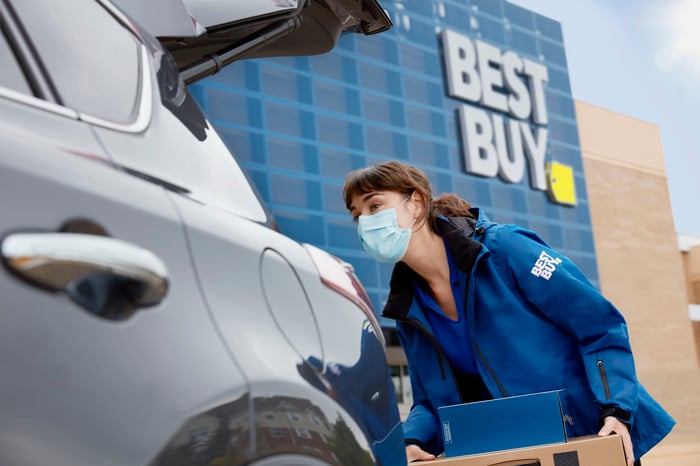 "Organized crime" in this case refers to loosely associated groups or "flash mobs" of thieves. Kroger's geographic mix may be boosting the theft rate with California accounting for almost 10% of its stores. That state's new policy, reducing thefts under $950 to a misdemeanor, means police often don't bother investigating. So the Golden State now has two of the five top U.S. cities for retail theft.

Now, the same trend is gnawing away at Best Buy's margins. In a CNBC interview, CEO Corie Barry said groups of thieves are "targeting stores, and going in and grabbing large swaths of merchandise and running out." In addition to reducing margins, Barry pointed out that "for our employees, these are traumatic experiences, and they're happening more and more."

Calling the rise of open pilfering "a horrible change in the trajectory of the business," she said the crime wave is affecting worker retention, possibly causing frightened employees to quit while there's already a labor shortage.

Barry also identified California as a theft epicenter, but said major cities elsewhere are also seeing the same trend. The Q3 earnings report itself indicates a total margin drop of 60 basis points year over year, from 24% to 23.4%, as a result. Promotions and other factors also contributed to the slump.

However, zooming out to a two-year comparison reveals a more upbeat growth trajectory. Q3's $11.9 billion in revenue jumped more than 22% from two years ago while adjusted EPS vaulted 84% to $2.08. No doubt, last year's results were distorted by COVID-19. Just as some companies saw sales deflate because of lockdowns, so Best Buy clearly gained as people sat at home and bought extra electronics to support their work and leisure activities. But longer-term, Best Buy still appears to be operating robustly.

Did the market overreact to Best Buy's report?

Best Buy's share price plunged nearly 16% on the day it released its Q3 earnings -- though it rebounded to a 12% loss by the close of trading. The negativity persisted into the next day, raising the question of whether Wall Street is correct in its pessimism or if investor sentiment is showing an exaggerated reaction to the results.

Neither Best Buy's slightly weak performance nor its shoplifting problem seem sufficient on their own to explain such a sharp plunge. What appears likely is that the two factors together startled investors into a sell-off, which then fed on itself. The theft, while it may continue or even increase in the face of an ineffective government response, still only moved margins downward a few basis points.

Revenue shows reasonable growth and earnings increased strongly over the past two years. At this point, Best Buy still looks like a decently, though not outstandingly, positive retail stock that could be worthwhile to consider.