The company scored well on most measures but its shares still fell sharply after Friday's report.

Traders may have overreacted a bit Friday when they sent the stock of grocery and pharmacy conglomerate Kroger (KR 1.32%) into a 7.5% same-day tailspin after its second-quarter earnings report was released.

Going by the financial metrics, the report looked highly positive, with both revenue and earnings leaving Wall Street analyst consensus in the rearview mirror. Kroger also boosted its full 2021 guidance.

The question is whether the falling stock price was a case of profit-taking, or if investors are responding to more fundamental issues for the grocery chain. Let's take a closer look. 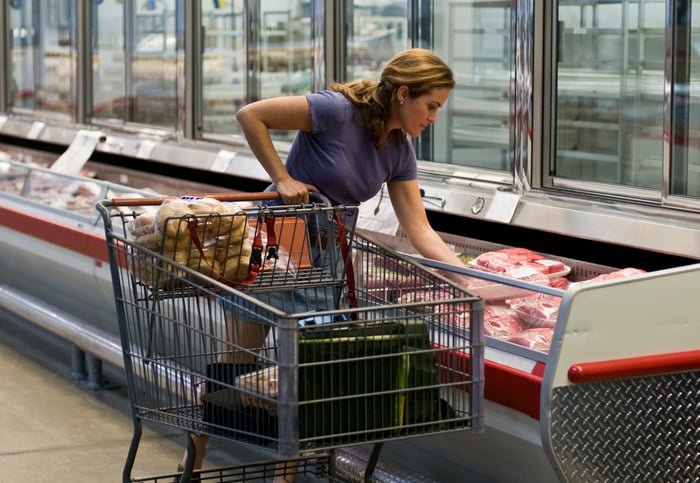 There was plenty of good in Kroger's report

Revenue climbed 3.9% year over year from 2020's pandemic-driven, stockpiling highs during Q2, while adjusted earnings per share (EPS) rose $0.07 to $0.80. Measured against pre-pandemic metrics -- what Kroger refers to as the "two-year stack" -- revenue surge 14%, EPS grew at a 28.4% compound annual rate, and operating profit rose 22.5%. Kroger's momentum seems to be carrying on well past the end of most coronavirus-related lockdowns and the panic buying and stockpiling of consumers during Q2 of last year.

The company's performance also beat Wall Street predictions in the most important metrics. Revenue surpassed consensus forecasts by 3.2%, while EPS delivered a 25% positive surprise above analysts' average figure. The company also raised its guidance, calling for identical sales for the full year to come in 12.6%-13.1% above 2019, operating profit to grow 14.1%-15.6% to $3.9 billion-$4 billion, and adjusted EPS to clock in at $3.25-$3.35 per share.

Kroger also appears to be successfully expanding the digital side of its business and integrating it into operations. It says 60% of items added to online shopping carts were chosen through its personalization program, according to data provided in its Q2 2021 earnings presentation slide deck. While its digital sales fell 13% year over year in Q2, digital has provided blastoff performance over the past two years with 114% sales growth. The company says it is "on track to double digital sales by 2023."

Kroger appears to be using some of its profits to directly benefit shareholders, too. It bought back $349 million worth of shares in Q2, reducing share dilution. The buyback boosts its 2021 share repurchases to $751 million, with $779 million in additional funds earmarked for more buybacks in the future. It also boosted its dividend payout for the 15th year in a row, by 17% this time.

There was also some bad in Kroger's report

Like most other businesses across a kaleidoscope of economic sectors, Kroger's bottom line is being eroded a bit during 2021 by supply chain pressures. The cost of goods sold has increased and the expenses related to supply are mostly to blame. Kroger CEO Rodney McMullen noted during the earnings call that he expects these difficulties to be "temporary."

Kroger's gross margin dropped 60 basis points year over year to 21.4% of sales. This drop is relatively modest, but McMullen revealed an unusual fact about the decline. While the margin compression came mostly from supply chain troubles, approximately 25% resulted from theft. McMullen described this as "heavily driven by organized crime or at least it appears to be."

Kroger's high number of outlets in California might speculatively be adding to this problem. While the famous Proposition 47 doesn't make shoplifting legal as exaggerated reports claim, it does downgrade thefts under $950 from a felony to a misdemeanor. This discourages costly police investigation and reduces the interest of overburdened courts in pressing charges, greatly lowering shoplifters' risk and thus encouraging large-scale, open shoplifting, sometimes carried out by groups or small mobs of thieves. Two California cities rank among America's top five for retail pilfering, now so ubiquitous certain chains have closed some Golden State stores in response.

California hosts more Krogers than any other state, approximately 303 or just under 10% of the company's total 3,242 outlets. Washington state, where hundreds of police have resigned since last year and crime is climbing, also has many Krogers, with 23 in Seattle alone. Another theft hotspot might be Ohio, with numerous Krogers including 27 in Columbus, where minor nonviolent thefts no longer trigger arrests or charges following a November 2020 policy change.

The drop in Kroger's share price is likely not due to one single factor, but to a mix. Some traders decided to take profits following the mostly upbeat report, while more skittish investors may have been spooked into selling by the supply chain and theft problems.

While supply issues will likely eventually resolve, the "organized crime" is slightly more troublesome given Kroger's retail exposure in states with high shoplifting rates and reduced police engagement. Given possible political aversion to cracking down on theft, margins could continue to be depressed slightly somewhat by pilfering for some time to come.

Nevertheless, the total impact of stealing remains relatively small, not enough to put the brakes on growth by this successful grocery and pharmacy chain. For those investing in consumer staples stocks, Kroger looks like a grocery seller with the strategic positives to continue growing even after the COVID-19 pandemic is brought under control.