Bumble's (NASDAQ:BMBL) stock has declined nearly 40% over the past month and now trades roughly 20% below its IPO price of $43 per share.

Most of that decline occurred after Bumble released its third-quarter report on Nov. 10. It beat analysts' estimates on the top line, but missed their profit estimates and lost paid users on a sequential basis. Those problems largely overshadowed its higher revenue and adjusted earnings before interest, taxes, depreciation, and amortization (EBITDA) guidance for the full year.

I recently covered Bumble's third-quarter miss in detail, but today I'll focus on the online dating company's curious focus on the "metaverse" -- which blurs the lines between the physical and digital worlds -- in its latest conference call. Let's see if it actually makes sense for Bumble to focus on the metaverse, or if it's merely trying to generate some hype with this new buzzword. 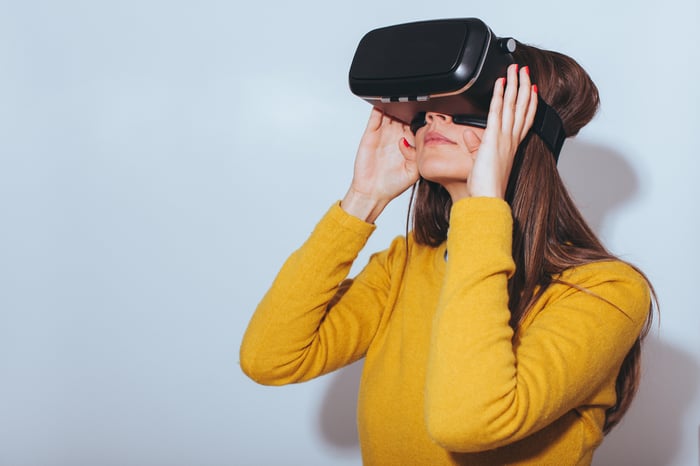 What did Bumble say about Web 3.0 and the metaverse?

During the call, CEO Whitney Wolfe Herd said Bumble BFF, its platform for platonic friendships, could "become a leader in the Web 3.0 world."

"Web 3.0" refers to an internet where people rely on decentralized and semi-anonymous platforms instead of massive tech platforms like Alphabet's Google and Meta's (NASDAQ:FB) Facebook. It's the underlying fabric that could enable mobile devices, smartglasses, headsets, and other devices to seamlessly shift between the real and virtual worlds.

Current examples of Web 3.0 technology include blockchain, the decentralized ledger that enables cryptocurrencies to be mined; torrents, which allow users to download files from their peers; and virtual assistants like Amazon's Alexa, which blend together voice recognition and artificial intelligence technologies.

Wolfe Herd said BFF was already "built on blockchain technology," and that it was designed to encourage its users to create their own communities. She believes that "in the near term" BFF will evolve and create "new engagement, participation, and creator models" for its users.

But over the "longer term," Wolfe Herd expects BFF to enable its members to "own their experience on Bumble" via the "communities they build, the virtual goods and experiences they acquire, or through new ways of owning their identity as they navigate the metaverse."

Those experiences haven't actually been developed yet, but Wolfe Herd said Bumble will relaunch BFF to showcase these new features in the near future.

Shaukrat said Bumble would "happily engage" with those third-party virtual worlds with digital avatars or other features, but it was more interested in the "application of blockchain and crypto" for its own communities.

That comment suggests Bumble might use blockchain to create privacy-oriented communities or accept cryptocurrency payments in the future, but nothing seems certain at the moment.

Could BFF expand into a major metaverse platform?

Bumble didn't break out any exact numbers for BFF in the third quarter, but it said its monthly active users (MAUs) rose 45% year-over-year. Back in August, it also claimed 10% of its users were already using BFF.

Bumble stopped disclosing its total number of MAUs after it went public this February, but its IPO filing reveals that its namesake app had 12.3 million MAUs last September. Based on those numbers and its latest percentages, we can estimate that BFF serves between one to two million Bumble users.

However, that's still a tiny audience compared to Meta, which hosted 3.58 billion monthly active people across all of its platforms last quarter, or Roblox, which ended last quarter with 47 million daily active users.

Therefore, it seems a bit doubtful that Bumble BFF will become a big blockchain-powered world of virtual communities. Instead, Bumble will probably just relaunch BFF as a more streamlined social networking site -- which might be more similar to Meta's Facebook than its core dating app.

Match Group (NASDAQ:MTCH) also mentioned the metaverse during its latest conference call, but it offered a more concrete example than Bumble.

Match has been testing out a new feature called "Singletown" across college campuses in Seoul, which enables its users to communicate with each other through digital avatars in a virtual piano bar. CEO Shar Dubey said it was already seeing "encouraging early signals" in terms of engagement among Gen Z users. That statement left a much deeper impression on me than Bumble's vague explanation of its metaverse plans.

Simply put, investors shouldn't read too much into Bumble's Web 3.0 and metaverse chatter until it actually relaunches BFF. For now, investors should focus on its ability to stabilize Badoo, expand Bumble's base of paid users, and narrow its losses instead of guessing what the next version of BFF will look like.