Bumble's (BMBL 6.30%) stock tumbled to its lowest levels since May after the online dating company posted its third-quarter earnings on Nov. 10. Let's review the numbers and see if its post-earnings plunge is a buying opportunity.

How fast is Bumble growing?

Bumble's revenue rose 24% year over year to $200.5 million in the third quarter, which beat analysts' estimates by nearly $2 million.

However, its revenue from Badoo, an older dating app which is more popular in Europe and Latin America, fell 3% to $58.0 million as its number of paid users dipped 9% to 1.33 million. Nonetheless, that app's ARPPU still rose 6% to $13.75. 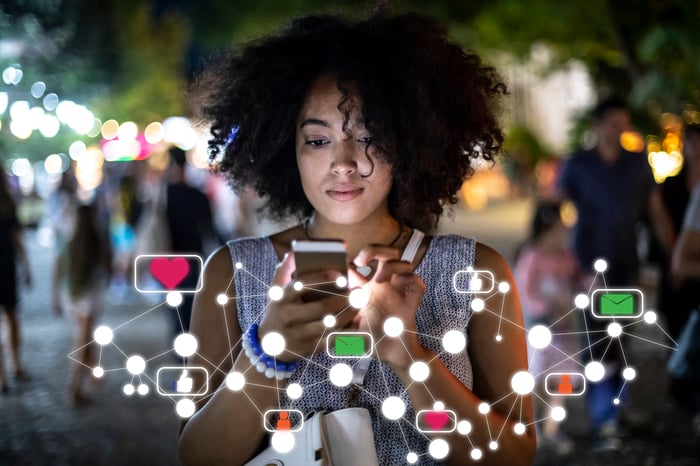 During the conference call, CEO Whitney Wolfe Herd said Bumble experienced "strong engagement across the app with record levels of activity once again in monthly active and daily active users."

By comparison, Match's (MTCH 2.26%) total number of payers, led by its flagship app Tinder, increased 16% year over year and 9% sequentially to 16.3 million in its latest quarter. Match's ability to grow its larger user base at a faster rate than Bumble's small one is troubling.

On the bright side, Bumble's total ARPPU increased 10% sequentially in the third quarter, which outpaced Match's 4% sequential growth in revenue per payer (RPP) last quarter. During the call, Wolfe Herd also pointed out that Bumble's core app "gained download share on a quarter-over-quarter basis in all of its core markets, including US, Canada, UK and Australia."

Match is consistently profitable, but Bumble isn't. In the third quarter, Bumble narrowed its net loss from $22.8 million to $10.7 million, but its net loss per share widened from $0.01 to $0.06 and missed estimates by a nickel.

Bumble's adjusted earnings before interest, taxes, depreciation, and amortization (EBITDA) rose 1% to $54.5 million, which surpassed the high end of its previous guidance of $48-$50 million.

Starting in 2022, Alphabet's Google will reduce its take of all first-year subscription fees for Play Store apps from 30% to 15%. A recent injunction against Apple, which still charges a 30% rate for the first year and a 15% rate for the subsequent years, will also enable apps to redirect users to external payment platforms to bypass its App Store fees.

Those decisions will likely boost Bumble and Match's gross margins, since app store fees are a major cost of revenue for both companies. During the call, Bumble CFO Anuradha Subramanian said Google's decision could be "very positive" for Bumble and other app developers, and that the company felt "very good" about building a new external payment platform for its iOS users.

That upbeat forecast indicates Bumble will continue to expand, it will offset Badoo's weaker growth, and that its adjusted EBITDA margins will stabilize.

Bumble needs to fix a lot of problems, but I still think it's worth buying after its post-earnings plunge. Its core app is still growing, it continues to raise its guidance, and the app store changes could boost its gross margins soon.

Bumble Needs to Break Up With Match Group